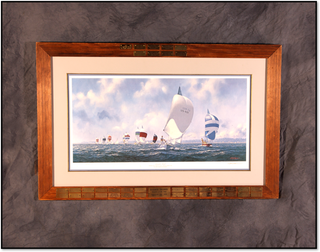 Presented in 1985 by the members of MORC Station 70, this trophy shall be awarded annually to one MORC and one J-24 skipper who beat the most competitors during the Regular Racing Season. The trophy is to be displayed in the Fishing Bay Yacht Club clubhouse with an appropriate plaque to be presented to the winners. The winners' names and yacht names are to be placed on the trophy for each year.

In 1995, the J-24's failed to maintain status as an Active Fleet and were deleted from consideration for this trophy. In 2000, the J-24's regained Active Fleet status and were reinstated as recipients of this trophy. In 2009, the J-24's were delegated to a Legacy Fleet and MORC was deleted from the Yacht Squadron list of offshore designated fleets, thereby making both ineligible recipients. The J-24's did not maintain Legacy Fleet status and lost this designation in 2010.

Any changes to this deed must have approval of MORC Station 70. If this is not possible, the FBYC Board of Trustees may make any change or reassignment they wish. After discussing changes with former MORC members, the Board approved awarding this trophy as of the 2010 racing season to a PHRF-C skipper, using the same rules for determining the recipient.