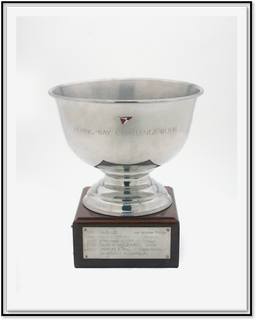 Presented in 1995 by Past Commodore Ian G. Lorimer, this perpetual trophy is to be used by Fishing Bay Yacht Club to select a boat or boats to represent the Club in a designated sailing activity. Each year the Commodore shall select an appropriate event or activity, which either needs a boost in participation, or is deserving of special recognition. The award will be made at the conclusion of the elimination series. The designated activity may be changed annually as determined by the Commodore. An announcement stipulating which activity has been selected for that fiscal year should be made to the Club's membership prior to the start of the sailing season. A majority vote of the FBYC Board of Trustees may alter the provision of this deed, if in the future it is deemed necessary. This trophy was presented in 1995 and 1996 to the winner of the match race series that determined the skipper and boat to represent FBYC in the Potts Southern Bay Challenge Cup.