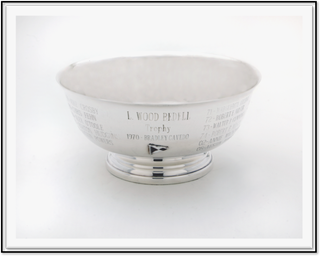 Presented by Mr. L. Wood Bedell in 1969. The Board of Trustees offered this trophy for annual competition in the Sunfish Class. In 1982, following the failure of the Sunfish Class to maintain its status as an active fleet, the Board of Trustees of Fishing Bay Yacht Club changed the award basis and offered this trophy for annual competition in the Junior Program, subject to the following requirements: To be awarded annually to a member of the Junior Sailing Program who has not reached the age of 14 and has placed highest in FBYC races during the Regular Racing Season. The CBYRA one-design high point system will be used to determine the highest finisher.