# 194 SOUTHERN BAY RACING NEWS YOU CAN USE

Looking to sail on a "Big Dog" race boat?  CBYRA 2004 president, John Dodge, is crew chief of  Donnybrook, Santa Cruz 70.  Donnybrook is in St. Thomas (for the weekend Rolex Regatta), but plans to return home (Annapolis) soon to do the upcoming Newport Bermuda Race. John said that if any SBRNYCU readers would like to take part in the St. Thomas to Annapolis delivery aboard Donnybrook, they should call him at (804) 334-6950.
Condolences are in order for the friends and family of Dr. John "Jack" Moseley, III, of Fishing Bay who passed to Fiddlers' Green week before last.  Jack usually raced as a crew member on friends' boats, but he did enter and win the 2003 …
Tweet

Fire destroys only grocery in Deltaville

DELTAVILLE - "Richmond people" and other visitors be forewarned. Bring your provisions if you plan to spend the weekend in lower Middlesex County, because Deltaville's only grocery has been destroyed.

The Town & Country Market burned early Monday morning along with a neighboring pizza parlor and a vacant flower shop. The closest grocery stores are about 20 miles away in Saluda, Gloucester and across the Rappahannock River in Kilmarnock.

And the inconvenience won't stop with Deltaville's considerable …

TONS OF FUN WITH SAILING!  This program is designed to get more active people involved in the wonderful sport of sailing. Classroom sessions review basics of sailboats, sailing and racing. On the water sessions are an opportunity to practice what has been learned in the classroom.

Upon completion of the program, we will assist in placing you (if you wish) as crew on an available boat racing out of Fishing Bay Yacht Club.  All types of boats are used for racing; large custom yachts, cruising/racing yachts and smaller one-design yachts.  It is preferred that you have some sailing experience and are comfortable with …

Sign Up for Cruising Class Opportunities in April and May, 2004

Cruising Opportunities at FBYC in April and May 2004
Be the first to sign-up!

The new cruising season is upon us. Please review the club cruising activities, and sign up with the event chairman ASAP so we can appropriately plan to have you with us. There are five sailing opportunities available in the early season to allow you to get out on the water and not travel afar. Wont you join us?

April 24 Opening Day FBYC On your own sail 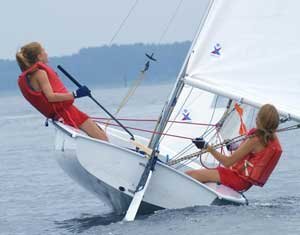 Soon, the 2004 Junior Program will begin. Building on last year, which saw the introduction of the 420 fleet and Race Team curriculum, there will be many new and exciting opportunities for FBYC Juniors. To make the most of those opportunities, there will be a significant change in the process for registration and the distribution of information and forms. We hope this change will help FBYC families better understand the FBYC Junior Program. For additional details about the exciting Junior events scheduled for 2004, see the March Log or go to the web site www.fbyc.net/Juniors.

The Junior events need planning, preparation and participation. To accomplish these three Ps there …

# 193 SOUTHERN BAY RACING NEWS YOU CAN USE

TODAY, March 22nd, is the last opportunity to pre-register to GUARANTEE your Race Management Book will be ready and waiting for you on this coming SATURDAY,  March 27th  at the CCV-HYC Race Management Workshop.  Call (757) 850-4225 to pre-register.  (Pre-registration is optional.)
March 27, 2004, CCV-HYC Race Management Workshop, Saturday, March 27, 9:00 am to 2:00 pm.  This year the Workshop is being hosted at Hampton Yacht Club;  it is FREE and OPEN TO ALL.  Registration (donuts and coffee will be available) begins at 9:00 am, with the workshop getting underway at 9:30 am sharp.  For planning purposes, those expecting to attend may  pre-register by calling (757) 850-4225.  Pre-registration is …
Tweet

April 6, 2004 - Tuesday evening (6:30) - CCV Annual Racing Rules Seminar at The Mariners' Museum. Well known racer and rules clinician Tucker Thompson will return to the area to give his new presentation on tactics and strategy and the related rules. There will be a brief on the updates in the General Sailing Instruction as well as the CCV Race Instruction. 2004 CCV Racing Guide will be distributed. The seminar is FREE and OPEN TO ALL. For info contact John McCarthy at (757) 850-4225.
Tweet

# 192 SOUTHERN BAY RACING NEWS YOU CAN USE

Floatline.com - Chesapeake Bay News is Launched:     http://www.floatline.com   A new web site that is designed to be a clearing house on news items and sources specific to the Chesapeake Bay.  You'll be able to find information on special events, environmental and political issues as well as other news and information that relates to our Bay.   The site is the creation of the same fine folks, Mary Ewenson and Dave Gendell,  who  created, developed, and administer SpinSheet Magazine.  Site managers say it will be up dated regularly and they encourage any webmaster who might be interested in establishing a link to the site to contact them.   For additional information contact Dave …
Tweet

The USSAILING Advanced Race Management Seminar, hosted by Hampton Yacht Club, concluded Sunday afternoon. Mark Murphy, Area C Race Officer, presented the seminar and guided the participants through the extensive and detailed curriculum. Wayne Bretsch was among the participants; he attended to update his extensive certifications. Many southern Bay racers will recognize Wayne as one of the 4 Key West Race Week PROs recently mentioned in the current Sailing World. Bob Thomas organized the gathering of 17 participants, the majority of which came from the southern Bay including eight from Fishing Bay Yacht Club along with two from North Carolina and one from New York.

# 191 SOUTHERN BAY RACING NEWS YOU CAN USE

CCV - HYC Race Management Workshop - Saturday, March 27, 2004,  9:00 am - 2:00 pm at Hampton Yacht Club, 4707 Victoria Boulevard, Hampton.  Each participant  will receive a copy of the 2004 CCV Race Management Handbook.  To be guaranteed  of receiving your Handbook at registration the day of the Workshop, call  (757) 850-4225  prior to Monday, March 22, and  pre-register.   This is a great Workshop for everyone who may be involved in Race Management during the coming season; a good refresher for "old" hands, a great introduction for first timers, and appropriate for all those in between.   This event is offered at NO CHARGE and it is OPEN TO ALL.  For information and/or …
Tweet

The latest issue of Southern Bay Racing News you can use reminds us of wind readings on both the Beaufort scale and by some more colloquial definitions.

Some racers have a special scale based, kind of, on the Beaufort Scale. Beaufort 1-2 = WHINE Level …

Thanks to Scuttlebutt Photos for sharing these awesome pictures of Mari Cha IV on its way to Antigua. Mari Cha IV offshore North coast of Brittany.

#190 SOUTHERN BAY RACING NEWS YOU CAN USE

It is MARCH!  There are pre-season things ya gotta do!   (1)  Tend to your alphabet paperwork, i.e.  apply for your PHRF rating (new or renewal);  join CBYRA and join CCV (ya gotta be a member of each to compete for their annual High Point awards);  join US SAILING  'cause it's the right thing to do.   (2)  Find or order from your sailmaker your set of class flags.   (3)  Dig out your foulies,  burn your socks, and  make the final payments to the boat yard, the sailmaker, and the insurance guy.
One last reminder, the USSAILING Advanced Race Management Seminar is this coming weekend ' hosted …
Tweet