Thanks Ivan, for not doing this to us!

Sorry, Grenada, to learn that Ivan did this to you.

Thanks to Scutlebutt Photos for the picture. For a close up see the bigger picture

The Cougars also had a team in Boston at the Hood Tropghy hosted by Tufts on the ever shifty Mystic Lake. Alana O'reilly and Susan Lintern sailed A-Division, while Jesse Combs and Hunter Stunzi sailed B-Division.
The singlehanded qualifiers had variable breeze in the morning between 5 and 12 knts, accompanied by calm seas. At the conclusion of the first four races, Blake Kimbrough of the Cougars had a strong lead by nine points, follwed by Chris Lash and Jose Fuentes.

We are perfecting our new online registration system and it is now available for your use for most events coming up in October.  Please go to www.fbyc.net  look in the top right hand corner where we list the next 5-10 events. If you plan to attend the event, please click on the Sign Up Here link next to the event.  Most events are free, the registration serves as your entry and also tells the social chair how many people to expect for the event.  The Annual Awards Dinner also has on-line registration.  You can pay via credit card and it is an easy way to make your presence known before the late fee kicks …

Last Saturday was Fall Series #3 and it looked like it was a fantastic day for sailing.  I had to work so I didn't get to the club until after the races were over.  We had 8 Flying Scots on the line.  John Hubbard took top honors for the day. John Beery with his daughter Katie finished in second.  Top husband-wife team, Ric and Sharon Bauer were third and vistors Mike & Mike came in fourth.  Thanks to Allene Cahill for doing the social after the races.  Results are listed below.

This Saturday is the last day of the One Design Fall Series. The early weather report sounds perfect -- dry and warm with winds from the South 5-10 possibly increasing to 15. Come on out for a fun day of racing and stick around for supper of Chili, cornbread, and salad (nominal charge for supper).
Tweet

We will cruise to Onancock or the Corrotoman River (or other areas) depending on the wind and weather forecast. . For those who can leave on Friday, we will plan to raft up or meet on the dock for a 6 PM cocktail party. Those who will leave on Saturday can catch up with us that afternoon. Please bring a hors d oeuvre to share with the group. I will have wine and beer for the group on Friday night; bring other refreshments if you need something different. Dinner will be on board unless there is a restaurant in the area that you would like to enjoy. Onancock will be our prime … 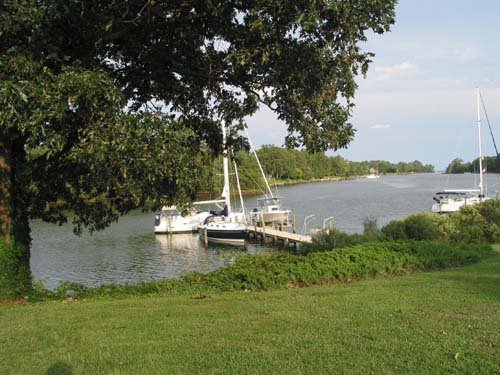 Alise Hilbert invited the FBYC cruising group to her lovely home on Dymer Creek for the weekend of Sept. 11-12, 2004. The weather was very cooperative, as were the winds. We enjoyed a nice cocktail party on the patio overlooking the creek and pool. Some of us went swimming, although most watched! Dinner was highlighted by Joe and Carolyn Schotts charcoal grilled steaks. Alise opened her home to FBYC, and we all enjoyed the hospitality; thanks Alise!

#218 SOUTHERN BAY RACING NEWS YOU CAN USE

TURKEY ALERT!!  One of the best special regattas on the Bay is just around the corner - THE 9th ANNUAL TURKEY SHOOT HOSPICE REGATTA FOR CLASSIC SAILBOATS.  All set for October 8-9-10, the Turkey Shoot is a member of the National Hospice Alliance and the overall winner earns a berth in the National Hospice Championship Regatta to be held in Spring 2005 in Annapolis.  Over the most recent years, this event has drawn over 100 boats annually and has become the second largest  Hospice regatta in the nation.  The only entry requirement is that the boat's design be at least 25 years old; for example, Catalina 30s are now classic designs.  Festivities begin Friday, October 8th …
Tweet

The College of Charleston sailing team took victories in the A-Division and B-Division to win the North South #2 Regatta held this past weekend at the J. Stewart Walker Sailing Center in Mt. Pleasant, SC.

Eckerd placed second in the regatta, while The Citadel rounded out the top three.

At Kings Point conditions were extreme with winds in the thirties on Saturday which resulted in cacellation of sailing for the first day of the regatta. Sunday had winds in the mid to …
Tweet

The Trophy Committee will receive nominations until October 1st for the following perpetual trophies to be awarded at the Annual Awards Party on October 23rd at the FBYC Clubhouse.

Please contact Debbie Cycotte - Trophy Chairman - BY OCTOBER 1st with your nominations. dcycotte@yahoo.comPIANKATANK TROPHY - recognizes the FBYC skipper who most exemplifies the principle that "all is not lost until the boat sinks".

MATTHEW FONTAINE MAURY BOWL - recognizes a member of FBYC for an outstanding contribution to sailing at Fishing Bay Yacht Club.

All should know that FBYC member Marie Klok Crump (wife of Will Crump) (the wedding picture) will be representing FBYC in the 2004 U.S. Women's Match Racing Championship racing for the Allegra Knapp Mertz Trophy on September 29 - October 3, 2004 at The New York Yacht Club in Newport, RI.

She was invited to participate in the event based on her application to participate. Her crew includes Sonya Smith from Falmouth, MA; Tammy Ouellette from Annapolis, MD; Sara Lynch from Newport, RI. Click here to see all the participants.

We'll be following the results - and good luck - Marie!

#217 SOUTHERN BAY RACING NEWS YOU CAN USE

The Pied Piper of Green Fleet Opti Sailors, Tom Coleman, will be at the USODA Atlantic Coast Championships, October 8-10, at Fishing Bay YC.  Any youngster who is new to Optimist competition will benefit greatly by participating in a Tom Coleman run Green Fleet.  This man has had favorable impact on more junior sailors than can be tallied.  He's a wealth of information for parents and guardians too.  For info contact Noel Clinard at (804) 285-0299.
CCV FALL SERIES  RACE #1  -  This coming SUNDAY, SEPTEMBER 26  -  Racing will be in Hampton Roads harbor; All PHRF classes; first signal at 1100;  CCV  traditional post race hotdogs, beer, sodas and awards on the …
Tweet

The annual WolfTrap race this Saturday provides the last hurdle for claiming the Offshore Long Distance Series prize and getting a jumpstart on the Offshore Fall Series.

It does not appear we will be adversely effected by Ivan or Jeanne, but conditions may be a little uncomfortable. Please, be attentive to communication from this events' RC, Brooks Zerkel, including feedback to Mr. Roberts in the event of any problems and/or any individual abandonment of the race. The RC crew are responsible for the fleet's whereabouts and safety, as well as, it goes without saying we need to look out for each other. If the Y flag is flying, all crew must be wearing life jackets, period! And it …

This past weekend was the Capitol District Championship Regatta hosted by our fleet. Twenty boats raced in near perfect weather conditions. All five races were completed in shifty conditions that made the racing interesting going around the race course -- going to the correct side of the course made big gains at the marks!

The complete results and some Pictures taken by Tom Roberts - Scot sailor for the weekend, can be found on the FBYC web site.Half of the boats racing were from our fleet, although two boats were borrowed by some of the Mobjack sailors.

The level of competition was very high. The new District Champion, David Neff from Fleet #42, finished 4th earlier this summer at the NAC …

This past weekend Jose Fuentes, Brendan Healy, and I traveled to Connecticut for the Pine Trophy. Winds were very shifty and light. Superior boathandling and speed had us out in front for the majority of the regatta.Pine Trophy
US Coast Guard Academy
September 11-12, 2004

Photo of the day - quite unbelievable

Click more to see what Scuttlebutt informed us about this morning.PODIUM TRAGEDY Marseille, France, 12th September - Following the conclusion of the Marseille Louis Vuitton Act 1, a violent storm and associated high winds passed through the area later that night and claimed the top three finishers: BMW Oracle Racing, Team Alinghi and Emirates Team New Zealand. All three boats were blown off their cradles and are lying on their sides on the J-4 pier. The incident took place at 02:40, early on Sunday morning.

Gusts of over 65 knots of wind were measured at the time of the incident. While there were no injuries, technical teams are currently evaluating the boat damage and assessing the situation. It appears …

#216 SOUTHERN BAY RACING NEWS YOU CAN USE

Cool Change wins Euclid Hanbury Cup at 22nd Executive Cup Regatta:  Rusty Burshell, skipper of Cool Change, J/30, won his fleet (PHRF B) and top honors for the regatta Saturday.  The Hanbury Cup goes to the spinnaker boat that wins its fleet by the largest margin (corrected time).  Burshell finished 5 minutes and 13 seconds ahead of the 2nd place B boat.  Sledd Shelhorse's Scherherazade won the 8 boat PHRF A fleet by 2 minutes and 21 seconds , Bob Archer, About Time, took PHRF C by 17 seconds, and Ed Andrews, No Problem, won the PHRF Non-Spin by 1 minute and 32 seconds.  The Executive Cup is presented by the Christopher Newport Sailing Foundation …
Tweet

#215 SOUTHERN BAY RACING NEWS YOU CAN USE 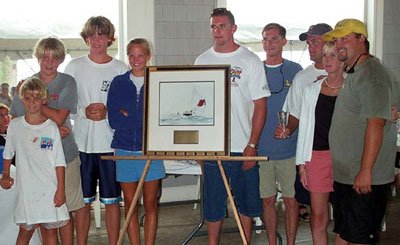 Mike Austin from Hampton Yacht Club sailing Movin On won the Brent Halsey Jr. Memorial Trophy at the Stingray Point Regatta on Labor Day weekend. Mike had 3 firsts in PHRF-B, the largest class at the regatta. The Race Committee headed by PRO David Lee got in 2 races on Saturday under breezy  15-20 knot - conditions  and one race on Sunday under very windy >25 knots and squally conditions.

The Sunday racing was very exciting as many variations were used for spinnaker takedowns, including several which occurred semi-voluntarily immediately upon launching the chutes (for example La Maga), others following the jibe when the chute was completely wrapped around the headstay (ala Loose Cannon) and others which required the competitor to …

A stalwart group of Junior Opti and 420 sailors braved the elements to sail in the 65th Annual One Design Regatta on August 14-15, 2004. Sailing in light and shifty winds and rain on Saturday, they got in several races, but were becalmed by the calm after the Charley on Sunday. Among those cheerfully defying wind and wrack were Madeleine Alderman, Alex Jacob, William Wirt, Natalie Wirt, Nick Howe and the indefatigable Austin Powers. Click here for the pictures to see how they suffered. Water, water, everywhere and nothing to do but eat!
Tweet

Mayo Tabb has provided an up to date copy of the phrf ratings at FBYC and asked me to post it as an attachment.

To the sailors of FBYC,
This time of year is always special for me as my thoughts drift to Fishing Bay, the regatta Jim Rogers and I founded in memory of Brent Halsey, Jr., and the pride I felt in chairing that event from its beginning in 1995 through 1999. The explosion of popularity of the event, growing from 24 boats it's first year to a record 100 in '99, was a tribute to the entire FBYC community and I thank everyone for making it such a successful event …

Run with the Pack for the Second Junior Dog Days Dogatta on Monday, September 6, Labor Day.

The Junior Divison Staff has put a lot of effort into making this a memorable event. Please plan to attend. This will give you something to do while the old dogs sail in their One Design Race and lick their wounds from the Stingray Point Regatta.

The Junior Program conducted the first of two Dog Days Series Sunday, August 22. We had excellent participation on the first day with numerous Optis and three 420s. A highlight of the day was the appearance of an unidentified canine Race Committee. The Committee Chair was so furry and ferocious that he has been sentenced to two …