#246 SOUTHERN BAY RACING NEWS YOU CAN USE

Save $35 by entering 2005 Southern Bay Race Week (June 3,4,5) now.  That savings can go toward "go fast stuff" for the boat, "look cool stuff" for the skipper and crew,  or ... well, any good racer can think of something unhealthy or slightly illegal!  Go to the web site for entry forms  www.hamptonyc.com/SBRW
CYRANO, COOL CHANGE, CALLINECTES, and VIRGINIA H  Top Dogs for a Day in CCV Spring Series Race #2:   It was cold, it became windy (as predicted), and boats and people were fully engaged as Mother Nature put on one of her "winter is over, when I say it is over" hissy fits.  There was a bump of  …
Tweet

Some of you had trouble logging into the web site the last couple of days. The problem is hopefully fixed now, please let me know if there are continuing problems. For those interested in the details, there are at least 3 different things going on.

With the new server for the web site, we hoped the pages would load faster. A month ago, we identified an issue and solved it so the home page loaded faster. But the events pages were still slow - for the same reason, but it was too time consuming to fix each page. On Saturday, the "expert" finally looked at it, and cured the problem with a little change. All events web pages need to know … 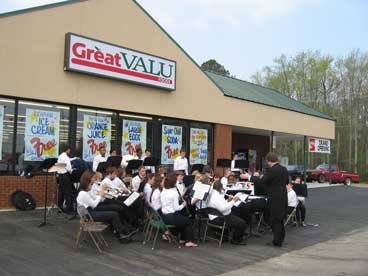 A quick visit to Deltaville yesterday exposed some important newsworthy items. First. the Town & Country Store had its grand opening, Richfood was giving away a dozen free eggs to the first 100 customers, and the Middlesex County High School Band held a celebretory concert at 9:30AM. 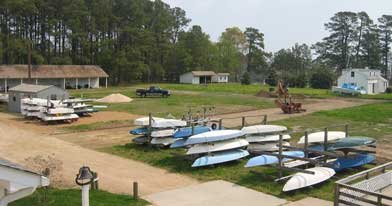 At FBYC, the work on the new road onto the new land was progressing very well. This view from the new Clubhouse upstairs Porch shows the road making its way from the clubhouse over toward the Jacob-Swenson house, where it turns left and heads to the old stables.This picture shows the new road from a location standing in front of the clubhouse.

Up to date PHRF Ratings

#245 SOUTHERN BAY RACING NEWS YOU CAN USE

PHRF RACERS - Do Yourself a Favor: Check YOUR listing on the PHRF Valid List.  Go to the web site www.phrfchesbay.com and follow the directions for viewing the Valid List.  Check your rating and your equipment category.  If you are 4P you are good to go just about anywhere in the Chesapeake.  'Nuff said.
Fishing Bay Yacht Club kicks off their "big boat" racing season this coming weekend.  Opening Day is Saturday, April 23, and FBYC Spring Series #1 is set for Sunday, April 24.  Contact Offshore Division CDR Eric Powers at (804) 706-1427.
CCV SPRING SERIES -  Leaders of the Packs:  Meridian, Bad Habit, roundabout, and Midnight Mistress  The weather …
Tweet

To kick off the 2005 sailing season, FBYC Fleet #103, held a seminar on successfully racing Flying Scots to be sure that everyone was up on the latest tuning advice and ready to go.

Twenty-seven sailors attended with visitors from the Scot fleets at RRYC, LOWSC, GRSA, and one Fireball sailor from Indian Creek YC on Sunday, April 10th. It was perfect weather to hold the clinic outside with a clear blue sky, temperatures in the 60's, and a gentle breeze perfect for "land sailing".

The real success to the seminar was our teacher, Greg Fisher, who heads up the One-Design Loft at North Sails in Annapolis. Greg is also one of the very best One-Design sailors in the …

We have a great opportunity to bring the Schooner Virginia to FBYC, and to provide a sailing camp upon it for 10 children ages 14-17 and 2 adult chaperones.  I have contacted Captain Glover and he has given us the dates of July 10th until July 16th. This is a first come first served bases. The rate will be $650.00 per person this is a discounted rate of $200.00 if we can fill the spaces. This is a unique adventure for the children as well as the adults, they will be working along side a crew of 12 sailing  the hand built 122 foot long recreation tall ship, everyone will have and equal and important role in …

Noel has asked me to change the deadline for registration (without surcharge for lateness)  for the Junior Week related programs from day after tomorrow to midnight Tuesday April 19  to give you time to file your taxes and get thru our on-line registration process.  The balance of this email should guide you through the registration process.
Junior Programs
The various Junior Division Programs are described on http://www.fbyc.net/Juniors/  You will see FBYC has lined up two great coaches this summer - Juan Carlos Romero, age 29, who has been coaching Optis for 10 years (including the South American Optimist Champion!).  His assistant will be his friend Arel English, a 19 year old Canadian. What a …
Tweet

Davis Island Yacht Club hosted this year's Frontrunner Midwinter Championship.  This event is always graciously hosted by DIYC in conjunction with the North American Midwinter Championship for Fireballs and served as a tune-up for dozens of Flying Scots in preparation for their Midwinter Championship in St Petersburg.  Many thanks go to DIYC and Paul Leonard the event chair.  I am especially thankful for Paul’s eye for detail and years of experience in preventing our fleet from displaying bad form when Paul denied our request to call this the “Frontrunner Intergalactic Winner Takes All Throw Down Regatta”.  I was also amazed by his good nature in hosting those zany Fireball sailors who still think it is hilarious to put one lucky competitor’s …

This Saturday, April 16, will be a day of tune-up sailing. We'll plan to arrive at the club around 10 and be on the water by 11. We'll do some drills, pratice starts and do some very short races. We'll stay close to the dock and just get out there to get the cobwebs out. If you can make it, or might be coming, please email Jon (jon-fbyc@jdeutsch.com, 804-305-1244) and let him know.

If you don't have a boat, come anyway. I'm sure at least 2 out of the 3 club boats will be sailable and we should be able to borrow/loan boats as well. Dress warmly with at least a ball …

#244 SOUTHERN BAY RACING NEWS YOU CAN USE

SUNDAY, APRIL 17 IS CCV SPRING SERIES RACE #1 - ALL RACERS MUST:
(1)  Have a valid, current, 2005 PHRF rating certificate showing the boat's rating and that it meets PHRF  4P Equipment and Accommodations Standards; and
(2)  Have an entry form in the hands of the Principal Race Officer, John McCarthy, by 1300 hours on Saturday, April 16.  (CCV Racing Members already have  fulfilled this requirement).
(3)  NOTE:  No boat may change fleets once the Race Committee boat has left the dock.
The "Dirty Dozen" + 1  Got Tuned-Up Sunday - 13 race boats busted out to play in the CCV annual TUNE-UP RACES in Hampton Roads yesterday and were rewarded with absolutely perfect conditions - flat …
Tweet

Cruisers from the Netherlands who are "on the hard" at Deltaville Boatyard are seeking a set of used cruising guides for the areas from Cape May to New York and Cape Cod to Maine. Please call Sharon Bauer at 804-697-7044 or 804-769-4293 if you have some that you no longer need.
Tweet

The annual Merrimac Memorial Regatta will again be held in the waters of the Elizabeth River off of Portsmouth City Park in Portsmouth, VA.  The regatta is open to all sailboats 22’and under.  Any 4 boats of the same class will receive their own start.  The open fleet will be scored under the Portsmouth Handicap system.  Trophies will be awarded to the top 3 finishers in all fleets.  The skipper’s meeting is at 09:30.  The first gun is at 10:00.  A Memorial Day cookout will be held at lunch.  Racing will resume after lunch.  Awards will be given out later in the afternoon.

#243 SOUTHERN BAY RACING NEWS YOU CAN USE

There is a new sail loft on the main drag in Deltaville.  Jerry Latell, manager and owner of the Ullman/Skelley loft in Irvington, has expanded his operation to include a larger and more convenient location on Route 33 (the main street through Deltaville - aka General Puller Highway) in Deltaville.  The Irvington Ullman/Skelley location will stay open as a canvas shop and as a pick up and drop off point for Jerry's customers' convenience.  For info contact Jerry Latell at (804)  776-6151.
FLYING SCOT WORKSHOP, Sunday, April 10, at Fishing Bay Yacht Club.  Well know top one-design sailor Greg Fisher will conduct the workshop.  Open to all interested Flying Scot racers and …
Tweet

After a great afternoon of sailing, enjoy a delicious catered dinner on the waterfront at Fishing Bay Yacht Club.

The second annual Virginia Institute for Marine Science raftup will be held May 21st on the grounds of VIMS @ Gloucester Point in conjunction with Marine Science Day. FBYC sponsored the first raftup last year, successfully attracting a large turnout from sailors around the Southern Bay. With the addition of more marine science demonstrations and great catering, this year's event promises something for every cruiser in the family. Visit the April FBYC Log for details and application forms or call Mimi Beckwth, VIMS Office of Development, 804-684-7784.
Tweet

Tuesday night Laser sailing begins this Tuesday, April 5 and will continue throughout the summer. We will start at 6pm and race from the FBYC beach to the designated starting area, government marker, or other suitable pre-selected marker with consideration of the weather conditions. There will be a 1-minute countdown to a rabbit start sequence. Sailors will rotate being the rabbit and will take turns setting the weather mark as necessary. Races will be Windward-Leward-Windward or about 15 minutes max. Thank Alain Vincey for getting this organized, you'll see him along with John Hubbard, Dave Porter and Jerry Dennison out there, so come on our and join them. For more information contact Alain Vincey anvincey@comcast.net or Jon …