Please take a look at my Blog - http://dingosailing.blogspot.com

Last Night we haved a big storm in Deltaville Virginia. Maybe 40knots and raining. When the storm finish, Daniel come to our house and told me, "we need some help with boats". We going to the club and ....... 420 are moved!!! When i saw that 420, UOUOUOUOOOOOO!!!
Look some pictures of this morning !!!
Amazing!! Just Wind!!! 420 at FBYC After Big Storm

The pageantry of man can provide some inspiring spectacles.

But the power of nature can stamp indelible images as well.

For the former, consider the start of the elite races of the Flying Scot North American Championship.

"It's pretty spectacular from the water," said Noel Clinard, chairman of this week's event at Fishing Bay Yacht Club in Deltaville.

Picture scores of sleek boats with sails spreading splashes of color in the wind.

"The starting line will be over two football fields long," Clinard said. "They'll be jockeying …

and Scuttlebutt had a nice "Sailing Shorts" article about the event:

* (June 27, 2007) A year after a microburst tornado storm damaged or destroyed much of the fleet at the 2006 Flying Scot North American Championship (NAC) in Marblehead, Massachusetts, local and national sailors gathered at Fishing Bay Yacht Club in Deltaville VA for the 2007 NAC, the largest in history on the 50th anniversary of the class. From Sunday through Wednesday, 119 Flying Scots competed in the Piankatank River mouth and Chesapeake Bay just off Middlesex County, Virginia. Winning the Championship Division was Jeff Linton/Amy Linton of …

From Sunday through Thursday, 119 Flying Scots competed for continental championship honors in 18 races in the Championship, Challenger, Women and Junior Divisions in the Piankatank River mouth and Chesapeake Bay just off Middlesex County, Virginia. Their success stood in marked contrast to the disastrous 2006 NAC in Marblehead, Massachusetts, struck by as microburst tornadic storm that damaged or destroyed much of the fleet.

May 13, 2007
By Larry Chowning
"Copyright Southside Sentinel, used with permission."

The Flying Scot North American Championship began Sunday and was due to be completed on Wednesday, June 27, on the Chesapeake Bay and the Rappahannock and Piankatank rivers near Deltaville. Fishing Bay Yacht Club hosted the prestigious event that attracted over 100 boats from yacht clubs across the country. Above, many of the Flying Scots can be seen in the distance from Stingray Point - the eastern tip of Middlesex County in Deltaville.

Its hard to believe another Junior Week has come and gone but hopefully 2007's edition will provide many fond memories for parents and kids to take home with them. This season saw 92 juniors at Junior Week and 23 at Oti Kids. These lucky sailors had lots to choose from, ranging from beginning Optimist to Racing Optimist, Laser and 420 classes. However, non-racers had their time on the water as well with our group sailing classes held on Mobjacks and Flying Scots. Added to this we had great weather and fair winds. This year's event came with all the trappings including some evening revelry with the Ice Man, a very fine dinner, the Leukemia Sail-a-thon and the Tuesday …
Tweet

Just wanted to give you a recap of the Sailathon yesterday.  We had GREAT weather and the kids really had a lot of fun.They are all excellent sailors.  The day went along very smoothly.

We know that there will be additional donations mailed into the office, so we're not done counting yet! Here is a list of awards:

Top Fundraiser: Harrison Burton - $1350 (his money still to be turned in)

Thanks to Judy, Bob, Arleen and … 1.  Noel and his team have published a 20 page Welcome Brochure which we will give you upon arrival - but it might be more fun to have a copy in your car as you drive towards Fishing Bay. It has all the logistical info you need, plus beautiful ads from many of our event sponsors.  You may get a copy - 6 MB download - at the bottom of the list at the top of the NAC event web page - http://www.fbyc.net/fsnacs  specifically at http://www.fbyc.net/Events/2007/06.24.onedesign/Welcome%20Brochure%206MB   Enjoy.
2. Directions to FBYC are available at http://www.fbyc.net/Club/Directions  - maybe you should …
Tweet

(June 11-15, 2007) There is something very Je ne sais quoi about the French and sailing. Maybe it is their Laisser-faire approach, or their sense of Joie de vivre. Whatever it is, they seem to have Carte blanche in the types of boats they sail and design. Simply said, everything seems very edgy, and this video (3:42 minutes) is a reflection of this. Watching the high-speed ocean-going monohulls, catamarans, and trimarans, plus windsurfing and kiteboarding, mixed with the song Absolutely Everybody by Vanessa Amorosi, will leave you feeling very French.
Tweet

The event, held in conjunction with the 50th anniversary of the Flying Scot, has set an unprecedented number of registrants making this one of the largest national regattas in its class. More than 100 boats are expected to vie for over 30 …

# 350 SOUTHERN BAY RACING NEWS YOU CAN USE

Every day on the water is a good day.  Yesterday was a  g-l-o-r-i-o-u-s  day - perfect for all the dads on Dads Day!
On this coming Sunday, June 24, more than 100 Flying Scots will begin competition for their North American Championship at Fishing Bay Yacht Club.  The Women's and Juniors'  titles will be determined on Sunday, and racing for the overall championship will go from Monday thru Wednesday.  The Flying Scot Class celebrates the 50th Anniversary this summer.
Two Races for Good Causes in the Southern Bay:
Tweet

Logging 198 miles round trip, 7 FBYC boats (Nugget, Reveille, Celebration, The Stray, Anneleise, American Pie, and Wings) participated in the cruise to Jamestown. Besides their days of touring outstanding exhibits (e.g. the new Jamestown Archerarium, an opportunity for dialogue with archeologist William Kelso, a visit to the magnificent new Monitor exhibit at the Mariners Museum in Newport News, flight simulator rides at the Hampton Air and Space Museum), the cruisers enjoyed the reciprocating hospitality of the Warwick Yacht Club, the Hampton Yacht Club, and also enjoyed the wind tunnel simulator created by Mother Nature when she dropped a 50 knot microburst, accompanied by its own light show, while the fleet lay at anchor near the mouth of …
Tweet

On May 27th 2007, 40 FBYC cruisers representing 14 boats joined 35 members of the Yankee Point Yacht Club at the Yankee Point facility for an after Rosegill cruise and dinner. Organized by Charlie and Stella Jones and hosted by YPYC Commodore and FBYC member Charles Lytton and wife Carol, the cruise brought together 2 vibrant groups for one of our cruising divisions largest turnouts of the season. Some attributed this to the charm of Meyers Creek and the YPYC facility, others to the well marketed lure of North Carolina Barbecue obtained by Charlie Jones. Whatever the reason, FBYC sailors once again proved that conviviality is contagious among sailors. Participating boats were Java Jibe, Reveille, Obsession, American Pie, Pharos …
Tweet

The FBYC Laser Fleet would like to invite junior parents and any other sailors out for some evening racing on Lasers and 420s Tuesday, June 19. Well get a lot of fun, informal races in with the first start just off the dock at 6pm. Well have an informal skippers meeting at 5:00 to review rabbit starts or whistle starts. Well race until we run out of light or wind.

This event was a big success last year and we hope with all of the parents in town for junior week that this year will be just as good. If you dont have a laser, try to beg/borrow one of you can …

The program is narrated by America's most esteemed television journalist Walter Cronkite. Newly discovered footage, and photographs highlight the …

The First Annual Sail Against SIDS is being held on June 30 - the same day as 2 other FBYC events - and it is set up to provide the "social funcion" for all the events. During the day, the Juniors will have a Team Racing Clinic and Regatta , and the Offshore Division will have Long Distance Series 3 - Moonlight Race . Sail against SIDS is going to have dinner start for the Moonlight Racers …

Junior Week is almost upon us and we're gearing up for another great season of junior sailing. Opti Kids is already underway and giving our beginners the chance to launch their lifetime sailing careers. The remaining sessions will be held this weekend. Our coaches have begun their treks to Fishing Bay from places as far away as Buenos Aires and Rosario Argentina and we've already held five sucessful spring practice sessions since the end of April.

This coming Sunday (June 17th) we'll host our annual "Meet the Coaches Day" from 1:00 pm till 4:00 pm. This is a free event for all juniors that would like a chance to meet FBYC's four fabulous coaches …

After a congenial welcome party in the Goslings Rum tent the night before, some eighty race boats motored out of Hampton Yacht Club and other local marinas on Friday, June 1, to begin three days of two-a-day racing at Southern Bay Race Week. The day began with the United States Navy providing a certain amount of local color. As the large fleet prepared to cross the busy ship channel at the mouth of Hampton Roads, many boats found that they had to alter course to make way for the aircraft carrier USS ENTERPRISE (CVN-65), which was returning to Naval Station Norfolk after conducting …

# 349 SOUTHERN BAY RACING NEWS YOU CAN USE

NEW on the Racing Schedule:  1st Annual Sail Against SIDS, Saturday, June 30 at Fishing Bay.  Proceeds from this event will go toward research and prevention of Sudden Infant Death Syndrome (SIDS).   FBYC is hosting this annual event.  Invited classes include Optis, 420s, Lasers, Mobjacks, Frontrunners, Flying Scots, and others with a Portsmouth Yardstick D-PN. Also, there will be a Team Racing Clinic and family cruises and moonlight racing is planned for the evening. The regatta is OPEN TO ALL.  Prizes, food, refreshments, more food (BBQ Buffet served continuously from 6:00pm to 9:00pm) and evening activities.   Planned as a "sail yourself silly" day long regatta.  For info and to register,  contact  …
Tweet

The Joys of Boat Ownership

Launching the Boat for the first time.... 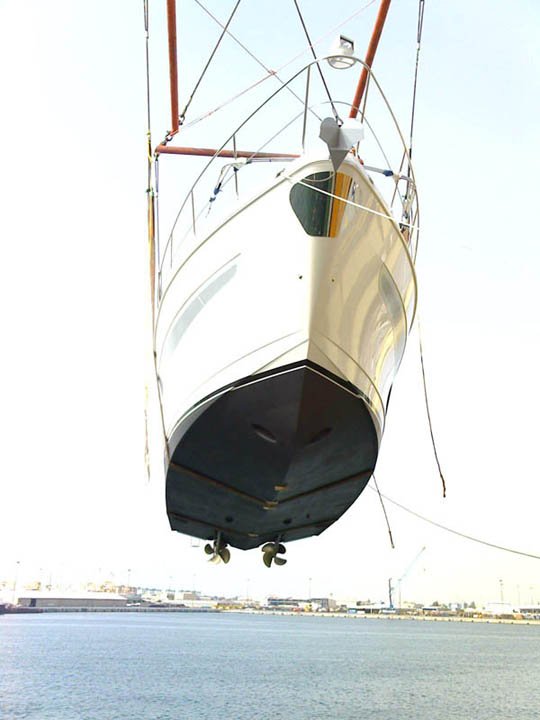 I guess the cable broke - check out the guy in the back of the boat.... 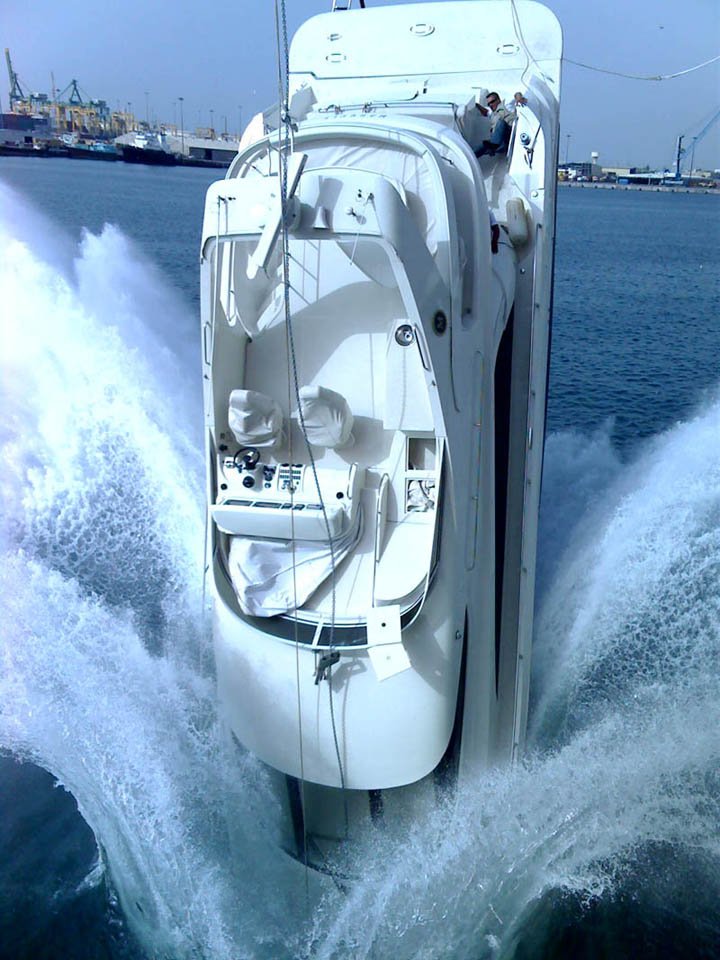 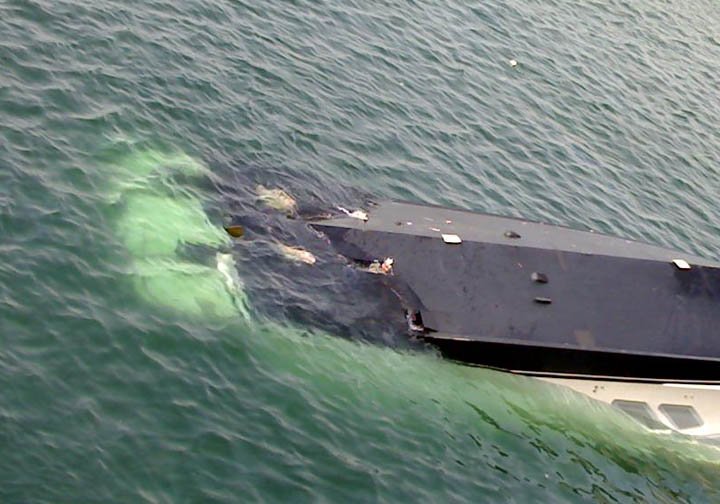 # 348 SOUTHERN BAY RACING NEWS YOU CAN USE

SOUTHERN BAY RACING JUNIORS:  The Virginia State Junior Championships are all set for Saturday, June 23, at Fishing Bay Yacht Club.  This regatta is open to all junior sailors.  Optimist, 420, Laser, and Laser Radial racers are invited.  There WILL be a separate Optimist Green Fleet.  Get the details and get registered at the FBYC website  www.fbyc.net
WAIRERE  Wins SBRW "Boat of the Week":  Pete Hunter, and the Wairere  crew came up out of Kill Devil Hills, North Carolina, and won a tie for first place in the PHRF A fleet, taking home "Boat of the Week" honors and the Black Seal Cup. Wairere  had a finish string of 1-2-2-1.  …
Tweet

The deadline for Early Registration for the Flying Scot North Americans passes tonight with the following Registrations for 88 Boats! On-Line Registration continues until Friday June 22 and in-person registration until 1700 on June 24. The entire list of Registrations can be seen Here. Because we will have more than 60 boats in the Championship Fleet, we expect the double round-robin format will be used in which all boats in that Division will be divided into four fleets, A - B - C - D, and sail in a 6 race rotation as specified in the Notice of Race.

In addition, Ric Bauer has finalized the site layout - who parks where, and how …