FBYC's Winter Program: How to Sail Around the World in Other People's Boats

Join FBYC members Carol Vaughn and Dave Tabor Wednesday, February 24 from 7-8 PM, online, as they describe how they sailed to exotic lands and foreign waters on other people's boats.

In 2018, Dave (right) and his wife, Carol (left), joined the Oyster World Rally as crew aboard a 54-foot Oyster sailboat.  Although Dave has decades of offshore cruising and racing experience, Carol was a "relative" newbie. She became tremendously skilled at helming in 40 knot winds and ten foot seas and also became an expert at filleting fish. (She even helped with a 60-pound tuna!)

In their webinar, you'll learn:

Take Your Pick of Online Boat Shows This January

This pandemic has brought much tragedy, disruption and pain.  But it has offered some opportunities that many of us would have never considered--such as attending multiple boat shows, simultaneously, online.  So while we hope and plan for a beautiful sailing season, check out either of these two shows to lift your spirits and enhance your sailing skills:

The Toronto Show is going on now through this Sunday and is free.  There are many sessions ranging from sail choice to cruising locations to electrical improvements to VHF communications.  Your can see are the seminars at:  https://virtual.torontoboatshow.com/seminars/

Another option is the Seattle Boat Show beginning Thursday, January 28-31.  This show also has multiple sessions including Navionics usage, anchoring …

Have an article for the Log? Please send to Joanna Wensell by January 21 to be included in the Feb/Mar issue.

YAMs are our Future at FBYC 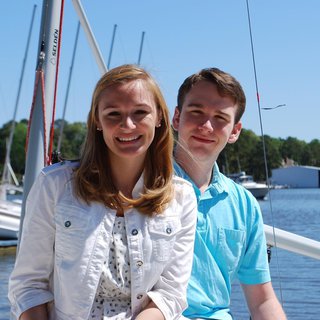 FBYC's future is very much determined by retaining and attracting new young adult members (YAMs) and there is no one better to lead that effort than Mary Catherine Buhl McAllister.  (Or "Cappy" as she will always be known to many.)

Mary Catherine's sailing career began during 1998 during Junior Week when she was seven years old. "That year, the Junior Week shirts were yellow and my oversized shirt fit me like a dress,"  she says. "I've grown a bit since then,  but that yellow shirt has survived the years and I still proudly wear it.

"After growing up in the Junior Program, in Optis and Lasers, I transitioned to college racing at Christopher Newport University. My CNU sailing days …