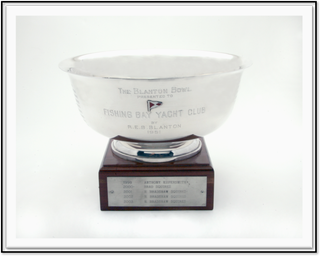 Presented by Mr. R. E. B. Blanton in 1951. The Board of Trustees offered this trophy initially for annual competition in the Twenty foot and under Handicap Class, and adopted requirements for competition and perpetuation of the award identical to those prescribed in the deed of gift for the Henry E. Hutcheson, Jr. Memorial Trophy. In 1959, when the award class failed to have the required number of eligible yachts for two successive seasons, the award was changed by the Board to the Mobjack Class. In 1973, Laser became the award class.