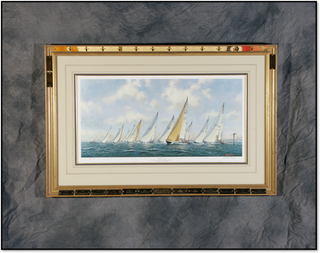 Presented in 1985 by former Commodore Wayland W. Rennie, this trophy, a framed print of John Barber's "Windward Start," shall be awarded annually to the FBYC enrolled yacht in the PHRF Spinnaker Class with the best score in the Offshore Division Fall Series under the scoring provisions of the then current race instructions. In the event no Fall Series awards are made, the trophy shall be kept by the Commodore until the trophy can be awarded. Changes in the criteria for awarding the Windward Start Trophy shall be by the determination of the Board of Trustees of Fishing Bay Yacht Club. In 1995, the Board designated PHRF B as the class in which the trophy would be awarded.