Never can it be written that Fishing Bay Yacht Club is without members who would willingly allow a pandemic and/or hurricane to come between them and loosely organized rallye followed by a socially responsible social.  This past weekend proved that that just ain’t so.

This year’s organizing committee had to adjust some of the founders’ rules that in the end, allowed a founder to claim first prize.  In the Wee Dram Deed of Gift [the non-existent document that governs this annual event], the rules of competition required amendment.   “Valid start times will be any time within 72 hours of the 5:30pm social Saturday.”  It’s a worthy change that benefits the Cape Charles economy as requested by four of this year's six participants.  As a matter of information, the Wee Dram had no official start time, other than the social in Cape Charles which is always held promptly at 5:30ish...which actually becomes a scheduled finish time.  Anyway, it's fixed now.

The other required change called for further clarity on what constitutes a valid entry fee.  Again, in the non-existent Deed of Gift, it clearly says that the cost of entry shall be one bottle of Scotch Whisky, of fine heritage, preferably single malt with a pleasant pallet.  Non-satisfactory entry fees shall be whiskeys with an ‘e’, bourbon, and other highly inferior bottles of hooch.  To that list of non-satisfactory entry fees was added… “Otherwise satisfactory hooch in an airline bottle is non-satisfactory."  Com’on man, it’s for sharing for pities sake!  You can’t even get a single wee from an airline bottle.

From those onboard: Perseverance, Corryvreckan, Schihallion, C’mon Wind, Red Tide, and rhapsody…we raise a small glass to John and Kara Koedel on Wings, winners of the 2020 Wee Dram Rallye.  For their efforts, a mostly empty bottle of Makallan 10 year, a homemade Wee Dram Burgee and the honor of being next year’s hosts. 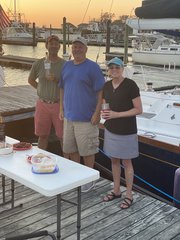