Saturday's "Women's Skill-Building" day on the water gave six sailors loads of practice docking (thanks Deltaville Boatyard for your new T-Head!) and "springing off" against an onshore breeze. Everyone had a chance to practice and embrace the old maxim, "approach a dock as fast as you're willing to hit it."  Each sailor did a fantastic job and learned that a second approach is encouraged and more than OK when it's needed.

We also had a brief look at AIS radios, SOLAS flares and practiced fighting a fire with ABC extinguishers.  "There is far less powder in an extinguisher than I appreciated before pulling the pin on one," said one sailor.  (Thank you Brian for safely providing a fire to fight.

Our MOB exercise--or more accurately called COB or crew over board--gave us an opportunity to deploy a Lifesling and test out a bluetooth COB beacon.  Every bit of practice helps build confidence as much as skills. 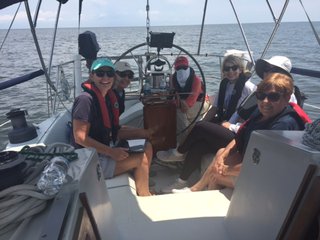 So glad members, Carol Vaughn, Patty Wittemore, Margaret Montgomery, Dawn Calabrese, Ginny Kinsey and Laurie Rogers could sail on Soulemate.  We had to turn away other interested women so hope to repeat the day sometime later in the season.