It was light, very light...the air that we sailed in.  Brad Squires and company did a nice job getting us started downwind in a whisper and making a call to use the short course, 15 miles.  Jon Deutsch took amazing pictures of the spinnaker boats as they left the starting area.  They can be found here.  Thirteen boats, in four classes, enjoyed an absolutely beautiful moonrise in a perfectly clear indigo sky.  A glorious night to be quarantined on the Chesapeake Bay.  Mayo Tabb and Excitation finished first in A with an adjusted time of 4h52m.  Bob and Lisa Fleck, absorbing Hatter's new handicap, finished first in B and first overall with an adjusted time of 4h45m.  Brad Miller and crew in Schiehallion led C with a corrected time of 5h39m.  Alan Heyward's ILMATAR and George Burke's Reveille sailing non-spin, I bet were really wishing they had a spinnaker in that two knot, downwind trip out to FBYC G.  FBYC has a great offshore program with three more races in the Distance Series with the next event, a new race for us, the Delta Dash - a 41 nautical mile track out of the Piankatank south to Wolf Trap and east across the bay and back...or...the other way round, east then south and back.  Captain's choice.  We will look forward to seeing you at the starting area on July 25th. 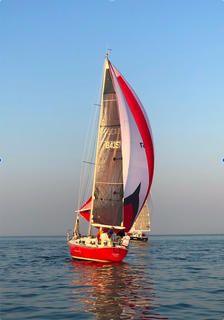