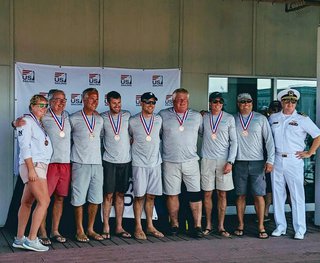 We are club-wide proud of Glenn Doncaster and his Nanuq crew for representing FBYC at the 2019 US Offshore Keelboat Championship in Annapolis this past weekend. Glenn and his crew,--Matt Newborn, Alex Seamus O'Toole, Sloan Burns, Jim Cobb, Commodore Paul Wash, Jerry Latell and their midshipman, Grace, took third place.

The 3-days of fleet racing, consisting of long-distance and buoy races in Navy 44's, attracted stellar competitors from throughout the nation.  Each of the 11 US Sailing districts sent a crew with our guys besting some prestigious organizations like Chicago's Corinthian YC and California's St. Francis YC. The Naval Academy also campaigned a boat (they won) and provided a cadet to serve as crew on the other contenders. 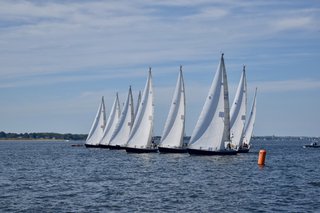 Congratulations to all our sailors who represented FBYC so well!