Due to a lifeguard shortage, we are asking FBYC parents not to count on pool lifeguards being in attendance the next 2 weekends/weeks  - which includes the Labor Day Weekend.  We expect parents, or responsible adults, to monitor pool activities and maintain a safe environment for the children and no children to be left unattended.
Thank you.
Ed O'Connor
FBYC Grounds Chair
Tweet

Stingray's Just A Week Away!

The 21st Annual Stingray Point Regatta is just a week away!  We've got a great list of entrants so far, but it's not too late to get in on the action.  We have extended our early registration deadline through this coming Tuesday (September 1, 2015) so don't think you have a reason to miss out on all the great racing and the fun party!

Speaking of fun party, we've got two evenings and an afternoon of great times to be had!  A schedule of events is posted below, but here are some of the highlights:

Friday evening's skipper meeting will be followed by a casual pizza party with refreshments provided. 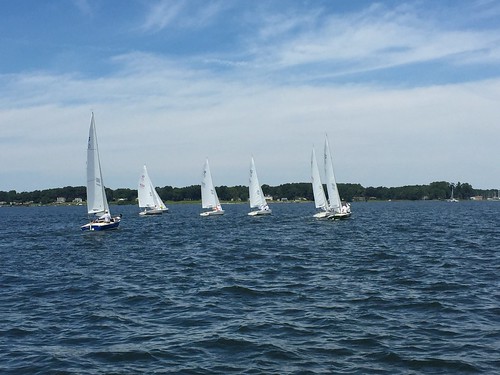 11 boats in 2 fleets sailed in the Legacy of Sail Regatta on Sunday.  These sailors of a certain vintage sailing both new and old boats got to sail 4 races in a 7-10 knot north east breeze.  Looking to raise the profile of this event, a new perpetual award presented by Paul Almany was awarded to the top competitor in the largest fleet.  This years winner was John Wake. 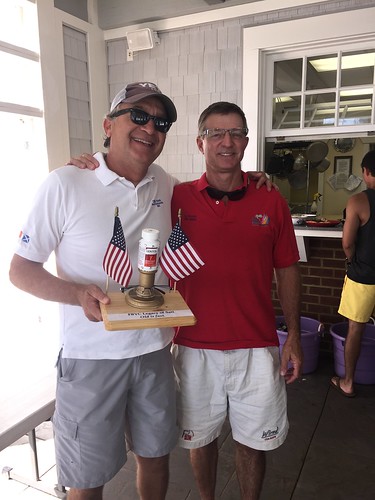 The 2015 Smith Point race will be remembered for the upwind slog and the downwind glide.  4 fleets sailed varying distances towards Smith Point lighthouse at the entrance to the Potomac River. 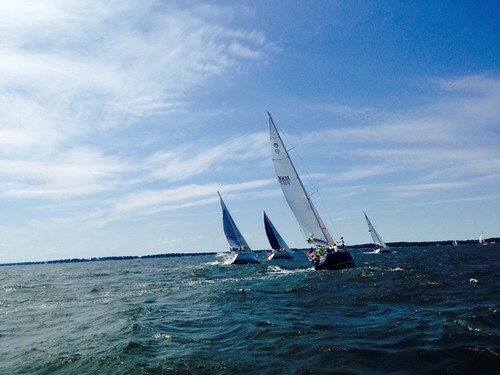 The last fleets to finish were crossing the line around 2-2:30 am.  Thanks to Case Whittemore and his crew on RC.

Photos courtesy of Carrie Russell aboard Mr Roberts during the start: 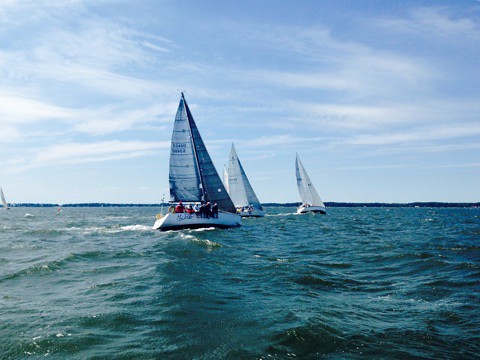 Benton Amthor at the Opti Nationals

A lot has happened since our last full newsletter in July! Our kids have raced from Brant Beach, New Jersey, to the bath-warm waters of Pensacola, to the Outer Banks of North Carolina, back north to the “invigorating” Atlantic off Salem, Massachusetts, to Ware River Yacht Club, and finally, back home for the Annual One Design. As always, our kids were a force in every venue and had a lot of fun along the way. The kids and their families explored the haunted houses of Salem, swam on the beach at Pensacola and rode the rides on the Jersey Shore, rolled down famed Jockey’s Ridge, climbed the Cape Hatteras Lighthouse, and raced go-carts in …

Have you seen the FBYC Mobile App? Have an iphone/ipad and want quick access to important information such as:

Version 1.3.6 can be downloaded at the Apple App store at  https://itunes.apple.com/us/app/fishing-bay-yacht-club/id980811053?mt=8   Look for a new version in the next week with results and more features.

To see the Member Directory on the App - you use the same credentials that you have at the website.  Big Thanks to Paul Wash and a number of tester-members for their work making this possible.

This Saturday, August 22nd, is the annual Smith Point race.  The first warning is at 1400 and the full notice of race can be found here. In addition to a great race, we hope you will join us for a delicious brunch on Sunday morning at 1000.  The menu features:

Cost is $8 per person, payable that morning.

This is our 4th annual induction to the Smith Point Crab Society. Eligibility to this society (shrouded by secrecy) is simple – the skipper who sails and finishes the race Saturday and who has participated in the most Smith Point Races is treated to free …

On August 9-14, 2015, Rives Potts, a FBYC member, and currently the Commodore of the New York Yacht Club, invited some FBYC members to crew for him on the New York Yacht Club's 159th Annual Cruise in Maine.  Each Commodore decides where he wants his Cruise to go, and Rives decided his first Cruise would start at Rockland, Maine, and sail to SW Harbor on Deer Isle, then to Pretty Marsh, and Bucks Harbor and then to a Lay Day in Belfast before returning Rockland via to Gilkey Harbor on Islesboro.  His usual race boat Carina, was still in Europe following the Transatlantic Race, so Rives persuaded a friend to let us race his Swan 56 Elysium …

Just a quick note that registration for the Stingray Point Regatta is now open.  Jump on over to the event page to sign up and come race at FBYC Labor Day Weekend! 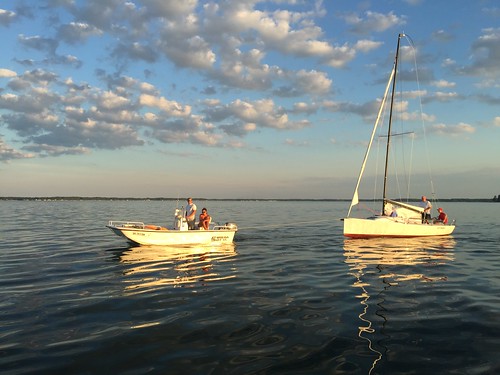 The J/70 Fleet started this weekend with Friday night sailing followed by their Summer Regatta II. Friday night the wind was light and two races were sailed before the wind petered out completely. More spirits were raised than dampened due to the conditions.  No wind - no problem for these J/70 sailors - they just retired to the club house to enjoy a bbq dinner courtesy of Steve Quiriconi & Beth Merchent that would make the Wednesday night dinner crowd jealous.  (Pictures) 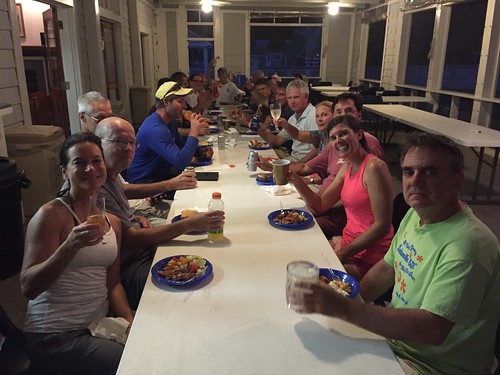 Saturday's racing more than made up for the lack of wind on Firday.  Seven teams were out including a team from Hampton on a boat graciously loaned to them.  That team led by … 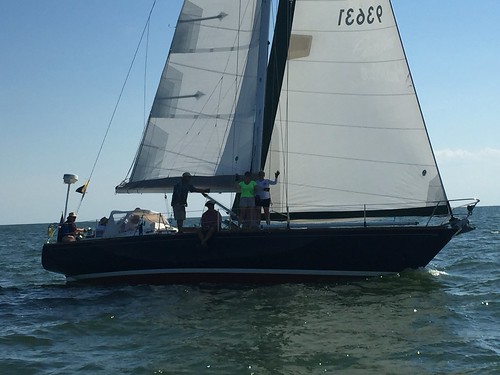 Under the second full moon in July, Incorrigible took First in Class, and Second in Fleet for the inaugural Southern Leg of the 2015 St Mary’s College, Maryland Governors Cup Race! Hosted by FBYC, Incorrigible started the 61nm, overnight race at “1NP” off New Point Comfort at 1600 hrs of Friday and finished at 06:03:53 hrs on Saturday morning in St Mary’s City, MD.

There are a few slots still available for our newest junior program, August OptiWeek, to be held August 10th through the 13th. The class is designed for beginners and first year sailors aged six to ten, and will be taught by our Development Team Coaches in the Club’s Optis. For additional information and to sign up, visit: https://www.fbyc.net/Juniors/AugustOptiWeek

Come and join the FUN!

The Opti Race Team returning to Salem Harbor after practice

The FBYC Opti Race Team is currently in Salem, Massachusetts, for the Opti New England Championship.  But it’s not all work-since they are in Salem, the kids and their families took a traditional ghost tour.  Check out their faces in the photo below!  Racing begins Tuesday, and runs through this Thursday.  There are over 300 boats racing.  Wish them luck!

This past weekend, August 1-2, the Opti and Laser Development Teams raced-and placed-at the Ware River Yacht Club Governor’s Cup; and the Laser Race Team finished up at the North American Championship on the North Carolina Outer …

Registration for the 76th Annual Regatta on August 8-9 continues until late in the week at https://www.fbyc.net/Registration/entry?event_id=1425.  Early registrations do help those who plan the food!   Listed below are the boat numbers as of Sunday Aug 2.

There was a 2-3 day hiccough in the web registration process last week, but once it was reported, we got it fixed relatively promptly. The form had a …