Fall Series started on the second day of Fall with light wind from the North West which built comfortably and shifted to the N NE during the three races (as SailFlow predicted (see previous post)).   There were 17 boats competing and all started together on each race adding some interesting large fleet racing aspects.   There were five classes; PHRF A, B, C, Non Spinnaker and J-70..  J-70s were racing tightly and the boats finished with 6,7,8 and 9 points.   The non spinnaker fleet was included in the first start and first leg to windward then did a medium length course up the Piankatank to Marker 12 then a slalom course back to 8 and then back to the stating line.   It looked like the attached screen capture.   The course was agreed upon by the competitors before they left the dock.   A better definition of the course showed it to be 12.6 NM.  All three finished by 2:15.   Photos from the day have been posted on an I-Cloud album for all on the Offshore mailing list. 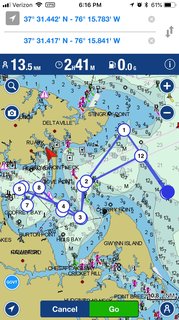