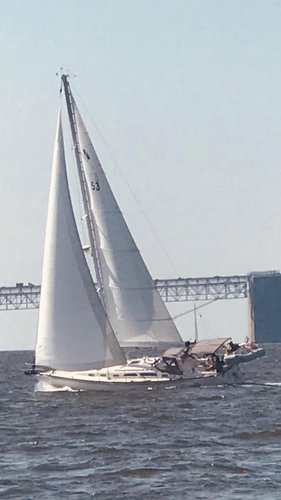 The ATB (Around the Bay) cruisers have weathered headwinds, rain, and fog with good cheer and remarkable resiliency.  Sailing Vessels Bolero, Joyful, Reveille and Whisper reached their northern goal of the Sassafras River four days ago. After turning their bows back south, they stopped in Chestertown, MD and Rock Hall.  They're now "holed up" at the Cambridge Yacht Club on the Eastern Shore's Choptank River.  After a week of cruising together, their little “ safe pod” of FBYC sailors are becoming like family in an otherwise slightly alien world.  Photo:  S/V Reveille hard on the wind with George and Lyons Burke at the helm near the Annapolis Bay Bridge.