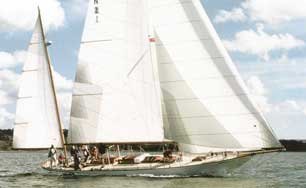 Halsey Herreshoff will present a lecture and slide show at on Friday Evening October 18. Please RSVP to 804-787-8015 before October 14 if possible and for specific information for the time and location please call 804-780-3271.

In 1976 he purchased RUGOSA (shown at left), winner of the 1928 Bermuda Race, and began a long restoration. In 2001 he sailed her to Cowes to race in the 150th Americas Cup Jubilee, where RUGOSA won first place in the Vintage Yacht Class. His slide presentation will cover the Herreshoff story, the transatlantic trip, and the Americas Cup Jubilee.

The event will be co-sponsored by SunTrust. There will be no specific entry fee, other than a requested voluntary tax-free donation to benefit the Museum. 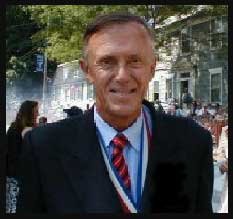 The Herreshoff Marine Museum / America's Cup Hall of Fame celebrates the unique accomplishments of the Herreshoff Family and the related drama of the America's Cup races, for the education and inspiration of members and visitors from around the world. 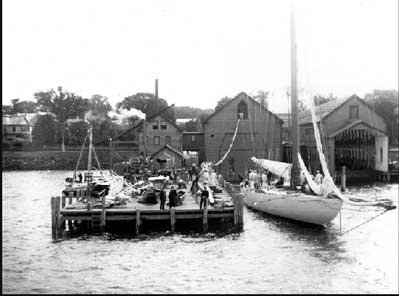 From 1863 to 1945, the Herreshoff Manufacturing Company, on the site of the present day Museum, produced the world's finest yachts on the cutting edge of design and engineering. The genius of naval architect Captain Nathanael Greene Herreshoff along with the business acumen of his blind older brother John Brown Herreshoff truly built the "better mouse trap" for which the world beat a path to Bristol.

This record includes the design and building of the first United States Navy torpedo boats, the finest lightweight steam machinery, pioneering fin-keel spade-rudder boats in the 1890s, innovations in boat and yacht fittings, mammoth schooner yachts and the principal One-Design racers of the New York Yacht Club.   Their most legendary accomplishment was the construction of eight consecutive successful defenders of the America's Cup from 1893 to 1934.

The America’s Cup Hall of Fame brings alive the history of the America’s Cup, tracing advances made in the design, construction and sailing in Cup competition, while providing permanent recognition to those who demonstrated outstanding performance and sportsmanship.

Museum activities include presentation of an extensive collection, educational programs for adults and youth, a boat restoration program, research and scholarship, outreach programs and community events.

THE FOLLOWING  WAS TEXT WRITTEN BY HALSEY ON THE HISTORY OF THE AC. THIS PIECE PERTAINS TO THE "HERRESHOFF ERA"

Ninety feet waterline length‑these were the largest and most impressive of all the America's Cup yachts. Author John Rousmaniere calls this time the "Herreshoff era" as all the defenders were designed by Captain Nathanael Greene Her­reshoff and were constructed at the Herreshoff Manufactur­ing Company in Bristol, Rhode Island. Following the un­timely death of his contemporary friend Edward Burgess, Herreshoff was the natural heir to the privilege of designing America's defenders. This followed from his demonstrable success in the early sloop SHADOW in Massachusetts Bay competition and the breakthrough designs of two 46‑ft‑class yachts GLORIANA and WASP that revolutionized the conventions of sailing yacht design during the seasons of 1891 and 1892.

M.I.T.‑ trained and the first to apply real engineering meth­ods to the art of yacht design, Nat Herreshoff possessed an uncanny instinct for rapid execution of revolutionary innova­tion in his chosen field. Interestingly enough, he might very well never have become a designer of sailing yachts given his early fascination and genius for design of lightweight steam machinery. Fortunately, Nat's older brother John was a highly ambitious businessman determined to build the world's best yachts; the brothers made a remarkable partner­ship: one running the business and the other doing all the designing, engineering and construction supervision.

VIGILANT (1893), DEFENDER (1895), and COLUMBIA (1899 and 1901) were all Herreshoff creations. RELIANCE followed on the heels of their success, forming a classic example of the fact that in most yacht development classes the successful boats get progressively bigger, heavier and more powerful (also true of the yachts of the 1870s and 80s, of the J Class, but not of the 12‑Meter class.)

RELIANCE was a powerful giant of a yacht with innumerable innovations of considerable interest (she appears on back of the new Rhode Island State Quarter and serves as the Museum logo.)  She completely out­classed all comers and won the Cup decisively. RELIANCE was a magnificent climax to that outstanding era of 90‑Footers; however, she also exemplified the trend to ever more extreme, costly and even dangerous yachts developing under the pres­sure to exploit the rating rule to the limit. Thus followed a more modest and saner type of boat under the Universal Rule developed by N. G. Herreshoff, RELIANCE's designer.

Arguably the greatest and most interesting of all Cup yachts, RELIANCE had a short career, being broken up soon after she so demonstrably fulfilled her mission of de­fending the Cup. What a great pity she was not preserved for our direct admiration today.