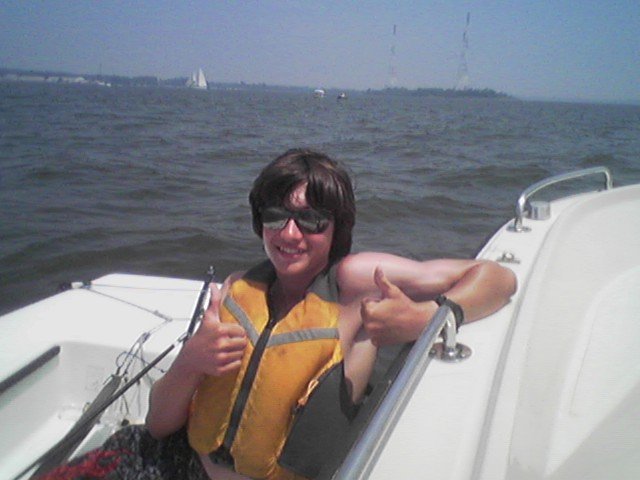 Yesterday the FBYC junior race team sent 4 420s, 3 Optis, and One Laser Radial (along with 2 coaches, 3 motorboats, and about 10 parents) to the Annapolis Yacht Club Junior Regatta. In the photo Quentin Jenkins displays a big smile and two thumbs up, indicating his pleasure at his first place finish in the previous race. On the day he ended up with a 3rd in class after about seven races.

In the 420s, Alex O'Toole and Sophie Massie sailed the best of the FBYC boats, yet the competition was very numerous and tough. They finished about the middle of the 18 boat fleet. The rest of the FBYC sailors, Kathryn Clinard and Lina Scott, Annie MacKinnon and …

#255 SOUTHERN BAY RACING NEWS YOU CAN USE

IMPORTANT REMINDER:  Don't let the 7th ANNUAL SOUTHERN CHESAPEAKE BAY LEUKEMIA CUP REGATTA slip by you.  All set to go for Saturday, July 9th, this event includes a skippers' breakfast, CBYRA sanctioned racing, and a Grand Gala & Awards Ceremony after the day's racing.  Entry deadline is Wednesday, July 6th.  This is an event that is certainly for a worthy cause.  It is also perfectly positioned on the racing calendar, so that racers traveling from the "far southern" part of Bay can use it as a weekend stop before jumping off to Screwpile in Solomons the following weekend. For info contact event chairman Judy Buis at  (804) 358-9475 or (804) 725-0218  Hosted by Fishing …
Tweet

#254 SOUTHERN BAY RACING NEWS YOU CAN USE

Fishing Bay Yacht Club and Hampton Yacht Club are the first southern Bay clubs to qualify to challenge for the BATTLE OF THE CHESAPEAKE TROPHY at Screwpile 2005.  In order to be eligible to wrest the coveted trophy from last year's winner, Annapolis YC, a club must have at least 5 boats entered in the Screwpile Light House Challenge.  In addition to HYC (7 entries) and FBYC (6 entries), there are four more southern Bay clubs with completed entries; they are: CCV (1); DYC (2); OBSA (1); BBSA (1).  The more boats racing, the better your club's chances of bringing back the BOC Trophy.  Get you buddies together. Round 'em up and head 'em …
Tweet

A perspective on the Americas Cup

This item was part of the June 15 Scuttlebutt and is an interesting perspective on this extravaganza. In particular note the comment on other ways to spend $300MM.

* From Stephen Wells: While I have totally lost interest in the cup it was interesting to read the AP (story in the New York Times (Little Things Mean a Lot). One really wonders how someone who could amass the necessary $300 million could spend it so foolishly. We are really lucky on the other hand that they didn't decide to spend it on running for president. The weight issue is really stupid. With over 50,000 pounds on the starting line and they are willing to risk a breakdown for a …

Arts on Fishing Bay - a Masterpiece

What a great Friday evening the Arts on Fishing Bay turned out to be! The 4th Annual Arts on Fishing Bay event in support of the Leukemia and Lymphoma Society was held June 10 in spectacular weather, with over 350 attendees throughout the evening. Thanks to Bob Kates, Judy Buis, and Carolyn Schmalenberger for organizing this beautiful event enjoyed by members of FBYC and the surrounding communities.

Each of the artists donated works to be auctioned at the upcoming Leukemia Cup fundraising auction to be held at the Deltaville Fire Department July 8, and we are very grateful to these artists for their generosity. Numerous attendees also made cash contributions to the Leukemia Society.

#253 SOUTHERN BAY RACING NEWS YOU CAN USE

Here comes 2005 SCREWPILE LIGHTHOUSE CHALLENGE!  July 17 - 19  in Solomons, Maryland.  Hosted by the Southern Maryland Sailing Association.  THE racing showdown on the Chesapeake Bay.  Get your boat, get your skipper, get your crew, get your ressies, get your lucky racing duds and your party sandals, and get entered!  This is the regatta you have just gotta do!   Check the web site at www.screwpile.com    To save the late entry fee, submit your SCREWPILE CHALLENGE 2005 entry form  now - it must be received by June 29.  For additional info, please call (301) 862-3100.
Annapolis-Newport Update:   This morning, shortly after 5 AM, southern Bay homie Mike Nestor and his crew …
Tweet

After the regatta the juniors took turns in the dunk tank with the Hampton sailors and ate much post-race pizza. The parents were seen under …

#252 SOUTHERN BAY RACING NEWS YOU CAN USE

SOUTHERN BAY RACE WEEK  2005 BOAT of the WEEK  -  Sledd Shelhorse's MERIDIAN takes bullets for all five races.  Racing in the 11 boat PHRF A class at SBRW, Meridian trounced her fleet in extremely light air, huge currents, fog, and eventually, on the third day of the event, perfect sailing breezes.   All the fleets battled fluky to non-existent wind the first day, a slight improvement in  conditions the second day, and after a tenuous first race on Sunday, great easterly sea breezes that built to 10-12 knots and stayed.  OVERALL RESULTS:  Boat of the Week:  Meridian, Sledd Shelhorse, Taylor 40,  as well as winner of PHRF A:  2.Sea Star, David Eberwine, J/36; 3 …
Tweet