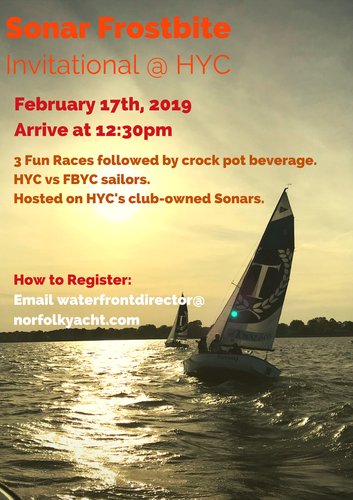 HYC has invited FBYC members to compete in a Sonar Frostbite regatta on February 17th!

Our thoughts go out to our friends at Annapolis Yacht Club and we wish them well as they start efforts to rebuild after a fire destroyed their clubhouse this afternoon.

The wider world of sailing

VOLVO OCEAN RACE - started last weekend in Spain and will take place over the next many months as they travel around the world.  Check out the new Volvo 65 One Design boats as well as the 7 teams taking part including the first all-female team in a number of years.  The race has great coverage on their website at http://www.volvooceanrace.com/en/home.html and also be sure to check out their YouTube channel for some great (and quick!) couple minute highlights.

#703 SOUTHERN BAY RACING NEWS YOU CAN USE

Southern Bay LASER Racers at District 11 Championships.  The 2014 District 11 Championships were hosted Saturday and Sunday at Tred Avon Yacht Club in Oxford, Maryland.  The Championship was part of the TAYC annual Heritage Regatta which also included Stars, Shields, and Log Canoes.  Henry Amthor (HYC) finished 2nd overall among the 20 title contenders and Jon Deutsch (FBYC) was 6th in the fleet that was heavily laden with northern Bay area racers, a number from Severn Sailing Association.  There were no southern Bay racers in the 11 boat Laser radial section.  Congratulations to Henry and Jon, who persevered through a light and damp air Saturday to enjoy a beautiful, sunny, breezy Sunday.  …

#679 SOUTHERN BAY RACING NEWS YOU CAN USE

PHRF WEBSITE UP AND READY – Register to apply/renew rating, check out the NEW Safety Equipment Requirements (adopted by PHRF of the Chesapeake) and more.  Go to the PHRF home page, www.phrfchesbay.org  and click on the appropriate topic.  You can apply for your rating, get info on the “Equipment Compliance Certificate” (you self-certify as in the past, but the category titles are different and so are the requirements), and you can pay at the site. The new Safety Equipment Requirements have been developed by US Sailing and come as a result of recent tragic accidents that occurred within the past year or two. PHRF of …

#678 SOUTHERN BAY RACING NEWS YOU CAN USE

Leukemia Cup to Host Gary Jobson in Richmond on March 16.  The Leukemia & Lymphoma Society kicks off its 2014 Southern Chesapeake Leukemia Cup Regatta season in March with a Richmond appearance by world-class sailor and ESPN commentator, Gary Jobson.Jobson will present his candid behind-the-scenes commentary on the spectacular America’s Cup comeback by Team Oracle over Team New Zealand in the Cup races held last September on San FranciscoBay. As National Chairman of the Leukemia Cup Regattas and himself a Leukemia survivor, Jobson will also offer some valuable fundraising tips for area sailors planning to participate in the upcoming 16th Annual Southern Chesapeake Leukemia Cup Regatta in Deltaville in July. The program is free and open to …

GOOD STUFF COMING TO THE SOUTHERN BAY THIS SPRING!

There are three special seminars coming to the southern Bay area  this coming Spring.

These seminars will be of interest to your members who are involved in, or want to become involved in, race committee duties, protest hearings and rules interpretations, and/or who sail the Bay in a cruising fashion (Near Shore Safety at Sea).

You may go ON LINE to enter and/or pay your entry fee and you can get additional regatta info at www.yachtscoring.com .  Also, the preliminary NOR is posted already for racers’ convenience. If you prefer to use a PAPER ENTRY FORM  for SBRW 2014, go to  www.yachtscoring.com, click on Additional Event Documents, print the form, fill it in, and mail it to the address shown.  If you have any difficulties entering, please DO CONTACT Lin McCarthy at (757) 850-4225 or email mcbear@earthlink.net   At SBRW the  racers are the top priority. #666 SOUTHERN BAY RACING NEWS YOU CAN USE

36th Annual GABOON RACE – Sunday, December 1st.   GABOON FOR THE SPITTOON!  Entry fee is $30 ($25 for US Sailing members) and must be submitted by 1230 on race day.  This is a pursuit race (slower rated boats start first) and the course is pre-set in the Harbor.  The start/finish line is in front of Hampton Yacht Club.  Staggered starting times begin at 1300. Participants must have a current valid PHRF certificate. Safety and Equipment Category 5P is allowed.  PHRF crew number limitations are waived.  There is a 1630 time limit.  The GABOON SPITTOON goes to the first boat to …

#657 SOUTHERN BAY RACING NEWS YOU CAN USE

WOLF TRAP RACE.  Twenty-five (25) boats filled with skippers and crew completed the 25 mile distance race on Saturday, before dark, most between 4 and 5pm …

#653 SOUTHERN BAY RACING NEWS YOU CAN USE

LABOR DAY WEEKEND IS ONLY 10 DAYS OUT!

LOTS OF CHOICES.  YA GOTTA REGATTA!

STINGRAY POINT REGATTA (Fri, Aug 30 – Sun, Sep 1) - Opens with distance race (scored separately from Saturday and Sunday racing) on Friday August 30th in Deltaville.  Two days of round-the-buoy racing on Saturday and Sunday.  For info, details, and to enter go to www.fbyc.net and click on the event listing. Organizing Authority is Fishing Bay Yacht Club.  In a setting that borders on charmingly rural and has all the additional niceties of the FBYC facilities, including water access to both Jackson Creek and Fishing Bay proper, a cozy waterfront swimming pool, and …

#648 SOUTHERN BAY RACING NEWS YOU CAN USE

#647 SOUTHERN BAY RACING NEWS YOU CAN USE

Keep your eyes on these southern Bay youngsters, who distinguished themselves by finishing in their fleet top 10 at the recent Junior Olympics in Baltimore. In the 51 boat Optimist Fleet, Brenton Amthor took 1st  overall and won the Chesapeake Bay Optimist Open Championship Trophy; Garett Levy finished 4th and Trent Levy 7th.  Among the 45 Laser Radials, Alexander Hanna finished 2nd, Hannah Steadman was 6th (and top girl) and Gray Kiger was 7th.  Among the 21 C420s, Jacob Marquardt and Anna Patterson were 7th and Victor Lane and Nicholas Baker were 9th.

#643 SOUTHERN BAY RACING NEWS YOU CAN USE

SBRW in a nutshell – 89 big boat skippers and crew sailed their brains out for three days in beautiful weather, partied their brains out with rockin’ bands and Gosling’s rum, partook of the downtown pirate festival street skirmishes and swashbucklin’ fun, tried out vendor standup paddle boards, laughed, sang and danced with one another, watched fireworks from the host yacht club lawn and raced, and raced, and raced.  The courses were different each day and to take home an award was no easy task.  The challenges were in the harbor (triangles – multiple races), off Buckroe in the Bay (a distance race) and off Ocean View in the Bay (windward-leewards – multiple races).  The winds were …

#640 SOUTHERN BAY RACING NEWS YOU CAN USE

FBYC Spring Series racers got in three races on this past Saturday.  Action will continue on this coming Saturday, May 18th, as Day 4 of the 2013 series takes place.  For all the race by race details and to figure the current standings, please go to www.fbyc.net and click on the applicable results.

PHRF of the CHESAPEAKE Update:  The difficulty our friends at PHRF have had this year with the ratings database is not news.  However, they have been working away at it and now have more than 400 of the 2013 ratings processed.  So, if you have not applied for renewal (whether you received a renewal reminder notice or not), you …

#638 SOUTHERN BAY RACING NEWS YOU CAN USE

Annapolis NOOD. Friday, May 3 – Sunday, May 5.  So, far 7 southern Bay boats are going one-design racing this coming weekend in the Annapolis National OffShore One Design Regatta.  Our area will be well represented in the J70 class – all 5 owner/skippers are entered in the 48 boat fleet:  Noel Clinard (FBYC), Lud Kimbrough (FBYC), Ron Thompson (HYC), and two Vortex Marine (BBSA) entries, one sailed by Jay Matteson and the other by Basil Rowland.  Craig Wright (FBYC) is the southern Bay entry in the 8 boat J109 class and Mike Gravitt (HYC) will wear the mantle in the 4 boat Viper 640 class. And, also from the southern Bay, senior judge John …

#637 SOUTHERN BAY RACING NEWS YOU CAN USE #636 SOUTHERN BAY RACING NEWS YOU CAN USE