Schiehallion, Nereid In the Silver Down The Bay

Brad Miller's SCHIEHALLION took a first in PHRF C and Eric Powers' NEREID captured second place in PHRF B in the 61st Down The Bay Race over Memorial Day Weekend. Glenn Doncaster's NANUQ, competing in PHRF A finished 15th overall in the fleet of 31 starters, but only 24 finishers (SCHIEHALLION, 12th, NEREID 18th). A strong showing for an FBYC contingent that is getting used to the podium (NEREID and SCHIEHALLION both won their classes in FBYC's Spring Series). The race started in Annapolis Friday afternoon, and first twelve hours or so were a real test of boats and crews with 20+ knots of wind on the nose and 3 foot seas. Then the storm hit. Then …
Tweet

No reservations are required. Admission is a donation to the Leukemia & Lymphoma Society and a hors d'oeuvre to share with fellow patrons. Beverages will be available at the event.

16 artists and craftsmen will display their masterworks, perfect for home, office, and cottage. Background music will be provided by an acclaimed local guitarist.

This event is open to the public. Everyone is welcome - bring your friends, relatives, and art connoisseurs of all persuasions and enjoy the convivial atmosphere of this annual FBYC-hosted event.

Proceeds generated by this event will benefit patients with blood cancers.

Inquiries regarding Art on Fishing Bay …

Championship Sailor to Exhibit at Art on Fishing Bay, June 4 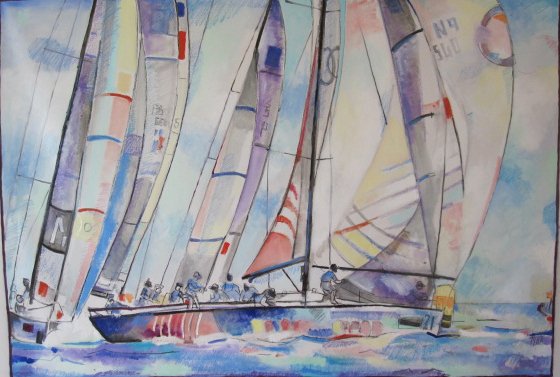 Art on Fishing Bay will have an international flavor this year with the inclusion of Joanna Tyka, an accomplished artist as well as a sailing champion. A native of Poland, she earned a masters degree with honors from the countrys Academy of Fine Arts in 1978. She has worked in design, graphics, tapestry, while continuously refining her painting techniques. Besides Poland, she has practiced her profession in Germany, Spain, Miami, and now Virginia.

The recipient of many international and national art awards, Joannas unique style has allowed her to maintain thriving relationships with fine art societies and galleries in the both the U.S. and Europe. Additionally she has shared her love of art as an instructor … 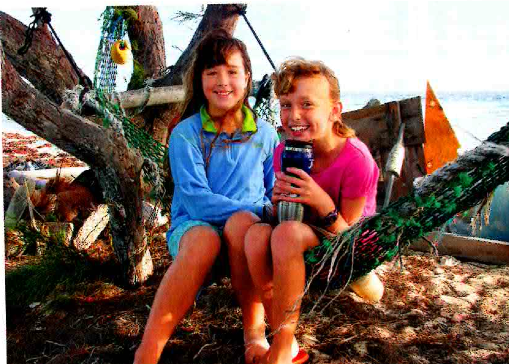 Mike Miller sent in a scan of an article in the June 2010 issue of Cruising World entitled Child's Play by Wendy Mitman Clarke. The article discusses long distance cruising with children on board - and describes anchoring in the same anchorage as Calypso - with Jeremy and Nica Waters. And their children's happiness with finding others the same age on a boat is a far away place.

The article can be downloaded from the Publicity Section of the website at http://www.fbyc.net/Visitor/Publicity/2010%20Archive/ChildsPlayCruisingWorld6-2010.pdf

#494 SOUTHERN BAY RACING NEWS YOU CAN USE

SOUTHERN BAY RACE WEEK (June 4-6, 2010):    More than 70 boats have already entered SBRW 2010.  TODAY, May 24, is the final day  before the $50 late entry fee kicks in tomorrow.  With 10  fleets, two racing circles (side-by-side off Ocean View), three days of great racing, and four party-hearty parties, there is a lot for everyone.  If the competitive skipper insists all the crew wear light Kevlar underwear, there's a PHRF fleet that will fit.  If you are laid back and  like to light the barbie on the last leg,  the Cruising fleet may be your cup of tea.  To get regatta details and/or entry forms, contact Lin McCarthy at (757) 850-4225 …
Tweet

Linda Hurt Doncaster died on May 12, 2010 following a courageous journey with cancer. She was born in Charleston, WV on June 3, 1960. She is survived by her husband, Glenn W. Doncaster, and stepdaughters, Erinn and Emily Doncaster. Linda was a graduate of West Virginia University School of Engineering. Her career path brought her to Cytyc (a company focused on womens health) where her skill and abilities lead to a fulfilling and very successful career creating many wonderful friendships. Linda married Glenn in 2004. She provided grace and beauty to their many endeavors. Linda loved to cook, entertain and take care of people, especially her family. Her …

Any boat that can get close to shore can be a big help removing harmful litter from our waterways. To volunteer, register at www.cbf.org/clean JOIN THE FUN! Clean the Bay Day, coordinated by the Chesapeake Bay Foundation, is a statewide litter cleanup that focuses on the creeks, streams, rivers, and shorelines that feed into Virginias Chesapeake Bay watershed.Every year since 1989, thousands of volunteers of all ages have dedicated their time to clear debris from Virginias urban, suburban, and rural shorelines and waterways. In …

#493 SOUTHERN BAY RACING NEWS YOU CAN USE

SBRW 2010 - Three (3) SBRW fleets, including PHRF C,  WILL BE SPLIT  for racing at this year's event.  The  PHRF A,   PHRF B,  and  PHRF C  fleets each will be split to improve the quality of racing.  Organizers will announce the splits (fleets scratch sheet)  on this coming  Wednesday, May 19.   www.blacksealcup.com  click on Fleet Scratch Sheet .
SOUTHERN BAY RACE WEEK - YIKES! the entry deadline to avoid the "Late Fee"  is upon us!   Don't get hit by the $50 late fee - enter no later than Monday, May 24.  Save the moolah for regatta drinks and food, SBRW T-Shirts from CORAL REEF SAILING APPAREL, pics for PHOTOBOAT …
Tweet 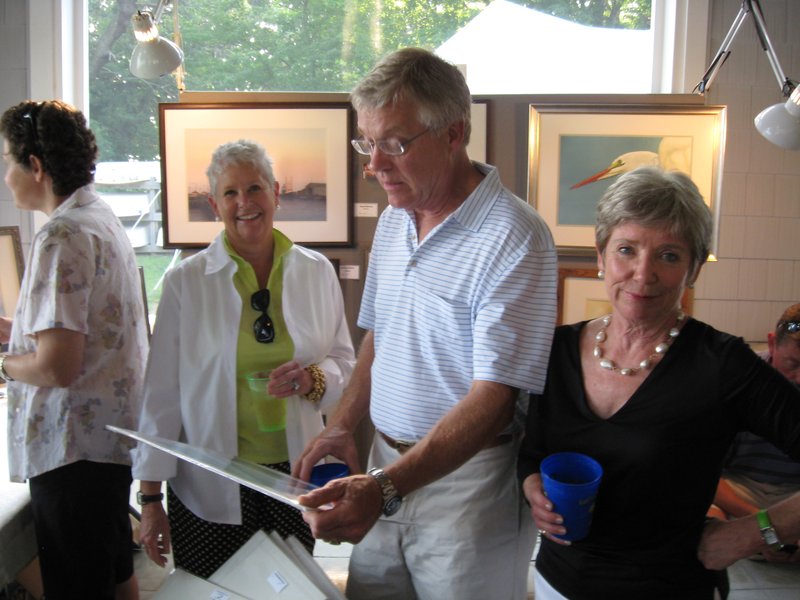 Art on Fishing Bay, one of Middlesex Countys premier art shows, has teamed up again with The Leukemia & Lymphoma Society on this 12th anniversary year of the Southern Chesapeake Leukemia Cup series. Art on Fishing Bay exceeded all previous attendance records in 2009. So mark your calendar for Friday, June 4, 6:00  9:30 PM, at the Fishing Bay Yacht Club in Deltaville and arrive early to have your pick of arts and crafts produced by many local and regional exhibiting artists.

Talented exhibitors will again display their creations to both browsers and buyers. Each will generously contribute one item to the popular Leukemia Cup Auction to be held at the Stingray Harbour Yacht Club on Friday …

The Nancy Jane Takes on Manhattan! 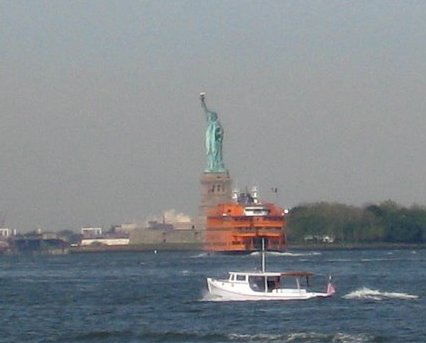 Yesterday morning Harry Wells and Master Navigator Chip Hall passed through Manhattan on the East River traveling south on the Nancy Jane. Rives Potts and his skilled craftsmen in Connecticut spent the winter making her beautiful- fiberglassing the hull, new engine box and mufflers and so on. My daughter Emmy who lives in Brooklyn took these pictures and they are sort of delightful. The NJ looks so small and somewhat misplaced under the Brooklyn Bridge but also jaunty and undaunted. To see the slide show on Kodak Gallery Click here
Tweet

The first cruise of the year took place with a shakedown to Mathews Yacht Club on May 1. We had 10 boats and 32 people from FBYC attend. We were treated to their opening day ceremonies, an open bar, fantastic meal and dancing under the stars. On Sunday morning we had an excellent breakfast out on the deck before heading home. A very special weekend trip by our cruise chair John Koedel.

The first Captains Choice cruise scheduled for May 15 currently has 8 boats participating and if weather will cooperate the trip will be to Onancock. Jane Cutler will host a potluck dinner on Friday night-let her know what you are bringing if you have not already done so …

#492 SOUTHERN BAY RACING NEWS YOU CAN USE

The eyes of Texas [were]  upon. . .Alexander Hanna last week as he finished  50th out of 185 in Opti Team Trials in Texas.  Alexander had  3 races in the top 10 (2,8,10).  He sails out of Fishing Bay and Hampton Yacht Clubs and comes from a long line of southern Bay racing Hannas, at the front of which is Alex's grandfather John Hanna who sailed his gray Pearson Battlewagon across many a finish line ahead of his fleet.
Last week on his way to a Leukemia Cup Kickoff-related event in Richmond, Gary Jobson paid a visit to southern Bay J/24-man (Roundabout)  Alan Bomar.  Alan is presently staying at a condominium in Richmond …
Tweet

Cruisers, racers, power boaters, juniors and pool fanatics, Bring your blankets and lawn chairs and get ready to bring in summer with a bang at Rosegill Farm. FBYC will host an awesome back to basics family picnic for all members and guests of the club. We plan to have a great picnic dinner, refreshments, music, some organized events for the juniors and some cool prizes. So mark your calendars now to come out and enjoy this great event with family and friends at Rosegill Farm!

We hear Sunday was rough for those who stayed home at FBYC.  At Leesylvania State Park we had early summer weather (sun with moderate winds and waves) and two days of great racing in a fleet of 9 Flying Scots.  23 Lightnings raced with a separate start.  Plan to attend next year for a real treat.
Five races were sailed over windward leeward courses.  Legs were 1 mile long with 3, 4 or 5 legs per race.  Current flowed out the river against the wind, causing several OCS's but no general recalls for Flying Scots.  At Leesylvania the river is wide and long.  Marks were set well off the shore and land did not affect the …
Tweet

#491 SOUTHERN BAY RACING NEWS YOU CAN USE

FLECK,  MITCHENER,  and JANKOWSKI do the NOODS.   Bob Fleck, who now makes his home in Hardyville (a suburb of Deltaville), finished  1st  in the 7 boat  S2 7.9 class at the NOOD regatta in Annapolis this past weekend.  Fleck's HORIZON dominated the fleet with a string of 1-1-2-1-1-1-2-5, finishing 7 points ahead of the 2nd place boat.   Sam Mitchener, who resides in Roanoke and sails his J/109, DOUBLE EAGLE, out of Fishing Bay Yacht Club,  finished 6th in his class and Chris Jankowski, also of FBYC, took 8th in the 17 boat J/24 class.   Both Mitchener and Fleck are Early Bird entries in upcoming (June 4-6) Southern Bay Race …
Tweet