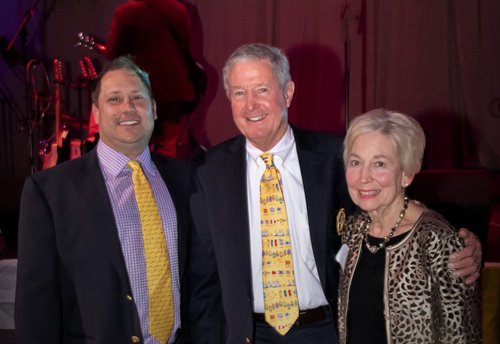 The Board of Trustees is pleased to announce the election of R. Russell Collins to Life Member.  What distinguishes a Life Member at Fishing Bay Yacht Club is the depth, breadth, superior qualities and lasting impact of contributions that person has made to the Club.

Russ and his wife Margaret joined Fishing Bay in 1982.  During his 37 years at FBYC he has been an enthusiastic and formidable competitor on the race course having won 5 perpetual trophies including the Nott (twice), Barber, Sportsmanship, and Piankatank.  Russ has been active in all Club Sailing Divisions and, as evidence of his devotion to the sport, personally donated 2 Perpetual Trophies; the Caroline Collins (young lady with highest standing in Junior Regattas … 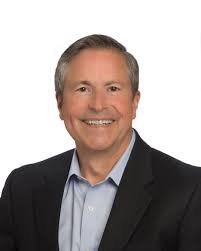 FBYC's own Lud Kimbrough, former commadore and long-term member, is now Middlesex's newest Board of Supervisors member for the Pinetop district. Congratulations Lud for your resounding win and winning platform of growing the county's tax base and improved services.

We're proud to call you one of our own.

As FBYC Historian, one of my responsibilities is the maintenance of our Dan Austin Memorial Library. Therefore, I am always on the lookout for quality maritime literature to place on its shelves.

Recently I received word that an old Richmond friend, Bill Westbrook, was retiring and returning to Irvington, Virginia where he had planted deep roots in the past. Bill had taken the reins as CEO of one of the largest and most successful advertising agencies in the Midwest, the Fallon agency in Minneapolis.

Now Bill has begun a new chapter in his life as an author of a series of historical sea novels that are set in the Caribbean during the late 18th Century.  To create this series …

Over 90 people attended our reception at the Deltaville Maritime Museum on Saturday evening of Memorial Day weekend. The reception inaugurated FBYC’s permanent exhibit and was a gesture of gratitude to the Museum and its Board Members for allowing us to highlight our historic role in the Deltaville community. For those who were not able to be there for the reception, a visit there is highly recommended to explore everything that the Deltaville Maritime Museum and Holly Point Nature Park have to offer. And for the price of admission, you can choose a membership option instead.

Your historian had the occasion recently to contemplate the swift passage of time, when, serendipitously, he received a parcel of old photos from member Evelyn Turner through member John Koedel. Among many club scenes worth preserving, there were several pictures of the interior of the old clubhouse, images of which have been notably absent from our archives.

Then it struck me that we still talk effusively about our ‘new’ clubhouse. Really…it has been an incredible 15 years since our old clubhouse came down to make way for the ‘new’ clubhouse in 2002. And many post-2002 members and certainly junior members through their teenage years have no recollection of our original clubhouse that served us so faithfully for over half a …

Your Memorial Day holiday weekend will not be complete without attending the FBYC reception at the Deltaville Maritime Museum in honor of our new permanent exhibit. The reception will include beverages and heavy hors d’oeuvres to delight the palate. The event is open to all members but you first must register online.

Cost to attend is $15/adult with juniors admitted free. $10 of each admission ticket will be donated to the Deltaville Maritime Museum which has partnered with us in the past to stage important sailing events, such as the Southern Chesapeake Leukemia Cup Regattas and the 2010 Optimist Nationals.

A full description of the event can be found online on our website. This event will symbolize our support …

This spring visitors to the Deltaville Maritime Museum will see some familiar history on display among the nautical history of the area.  Club historian Jere Dennison and several other volunteers have been working with the Deltaville Maritime Museum to include an exhibit on Fishing Bay Yacht Club that will include pictures, stories and other artifacts like an Opti and even one of old club signs.

Friday, an Opti donated by Luke and Logan Hayes was set up at the Deltaville Maritime Museuem by Mark Hayes and Doug Bendura.  The boat is a 1981-1982 Opti built at the North Carolina Maritime Museum and used in their junior program until 2005 when it was bought by the Hayes family.  …

Jolly boat and Junior Videos from '69-71

Lud Kimbrough (818) has shared some videos from '69-71 of FBYC Sailing and ‪‎Deltaville.

‬ Here's the first of ‪‎Sabots‬ sailed by juniors and teens. Yes, the lifejacket policy is a little more contemporary.

This video of Jolly boat racing at FBYC during the World Championship in 1971.

Another video from Lud of the Heritage parade in Deltaville on July 4 can be found here.

The Hermione at Yorktown

On Sunday, June 7, your Historian visited Yorktown to board the Hermione, the magnificent recreation of Lafayette’s frigate that conveyed him to America in 1780 to support General Washington in the defeat  of Cornwallis which virtually ended the Revolutionary War. The accompanying picture shows the scale of the frigate in comparison with the Godspeed nearby that looks like a dinghy in comparison. While there was a two and a half hour wait before boarding, it was certainly worth the time and effort to do so. I was in the company of member Owen Davidson who drove all the way from Christiansburg for the tour and happily ran into David Porter, one of our accomplished Laser Masters, who is in the …

Portsmouth, RI (April 1, 2015) – Due to the long term decline in sailing as a sport in the United States, US Sailing, the national governing body for the sport of sailing, has announced cost cutting measures to remain solvent with its current membership size.

No longer will the organization support youth sailing events, recognizing that the current youth sailing model is not growing the sport. “The pussification of our culture has made it easy on kids, so we felt it was time for US Sailing to stop contributing to this issue,” explained Jack Gierhart, Executive Director of US Sailing.

The organization has also revised its outlook on education. “While we have derived significant income for …

Since snow has been heavily on our mind lately - our historian Jere (and Clark) Dennison have dug up some photos from snow in 1977. 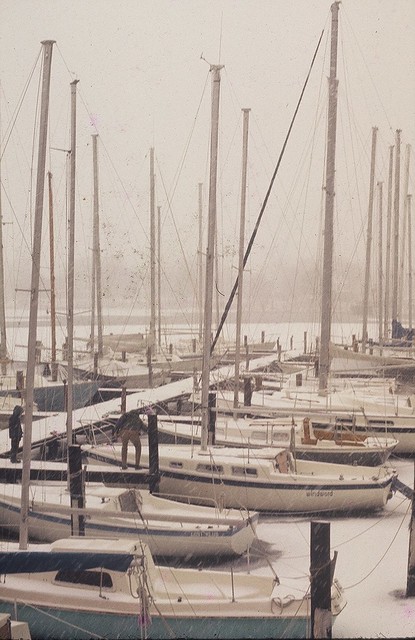 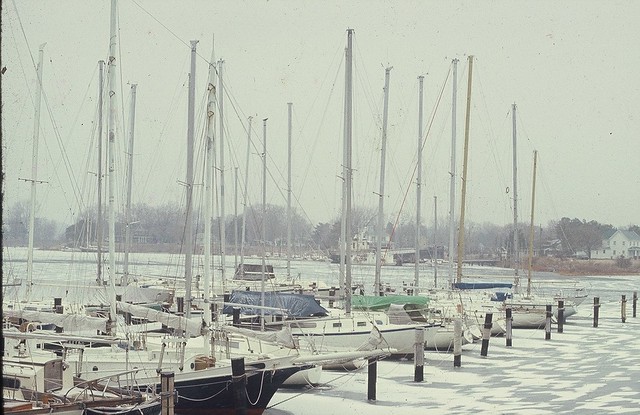 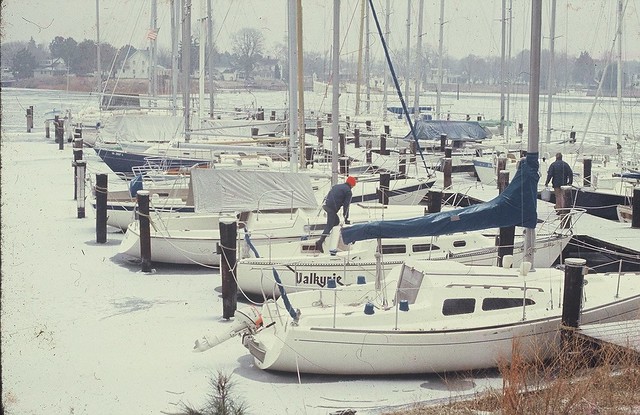 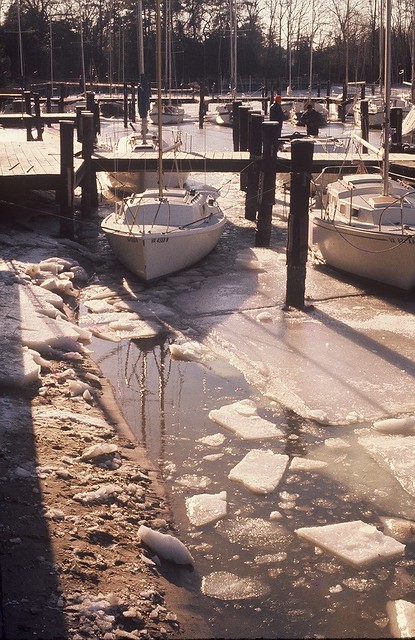 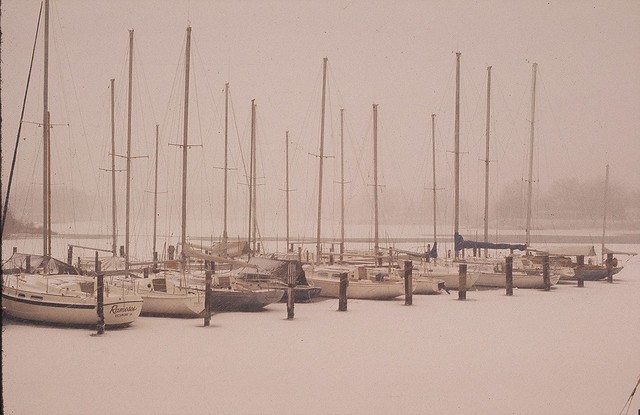 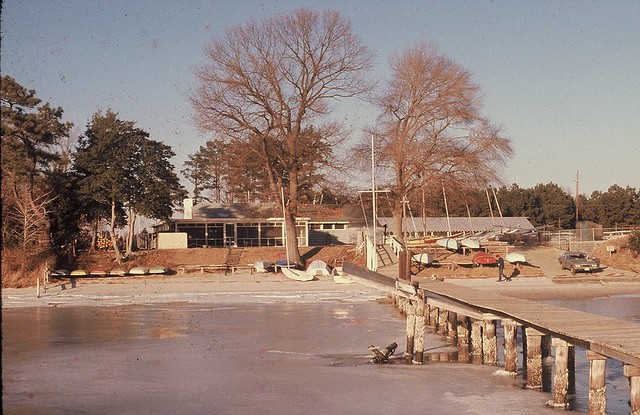 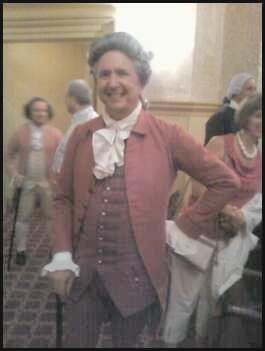 Did you know that our CBYRA Delegate, Tom Roberts, was actually Dr. Lyman Hall, signer of the Declaration of Independence as the Georgia Delegate to the 1776 Continental Congress!! Tom/Dr. Hall in full regalia after the sold-out closing performance last night of "1776, America's Musical", at the Kimball Theatre in Colonial Williamsburg. Ask Tom to show you a little minuet two step.

During the weekend of the Chesapeake Bay Laser Masters Championship a peice of America's Cup history was in Fishing Bay.  Black Knight, the boat used as the Signal boat by the New York Yacht Club in the 1983 America's Cup made a stop at the Chesapeake Marine Railway for some minor repairs on her way further south. More pictures can be seen here.

Photo of the week at CBF

"For much of the year, I live on the Chesapeake Bay. The view from our house on Stove Point is unencumbered by land—just a jut of Gwynn Island to the right and Stingray Point to the left. In the distance almost directly in front of the house is Marker Number 6, a small black channel marker that blinks a red light at night. This marker is a beacon—a constant in an expanse of ever-changing light, wind, and color. Several years ago I decided to take a photo of this panorama every morning at dawn. While undertaking this project, I found that my long-time fascination with observing water and weather and sky turned into a … 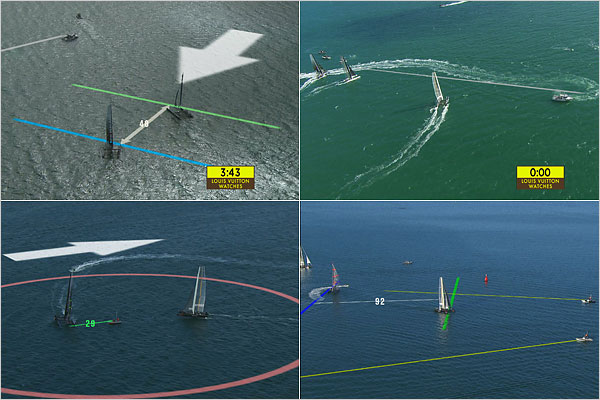 Interesting NY Times article about the technology expected on the TV in the upcoming America's Cup races. The Americas Cup, Translated for Television
By ANNE EISENBERG

THE yacht-club crowd may turn out to cheer at regattas, but sailboat racing hasnt been a big hit with mainstream television audiences  perhaps because they have trouble following whats happening on the waves.

Experts in the sport may appreciate a helmsmans split-second tactical decisions or a crews athleticism, yet the drama often goes over the heads of landlubbers who dont know how points are scored, or even who is ahead.

Now technology may change that. Starting in August, a two-year series of regattas, culminating in the 34th …

When we started the new Fishing Bay Yacht Club web site around 2001, Mark Wensell, a FBYC member had just founded bayMountain, a new data center in Richmond. Mark offered to help us out by hosting the site and also did the initial set up of the computer, the software, and the database that even today still runs the site.

His company's recent growth was highlighted in a recent article in the Richmond Times Dispatch. See http://www2.timesdispatch.com/business/2011/feb/15/tdbiz01-peak-10-expands-data-center-in-henrico-ar-843293/

All that digital information that moves through cyberspace has to live somewhere.

The Peak 10 Inc. data center in Henrico County is one of those places.

Fueled by demand from businesses that need someone …

Winds of Change By Tom Pelton

From the early days on the Chesapeake Bay to the yacht races held all along the Bay today, the Chesapeake’s winds have played an outsized role in the region’s economy and culture.

But some scientists have concluded that those wind patterns have undergone a historic shift. And this change in average wind direction has had an impact not only on sailing, but also on water quality in the Bay. Until about 30 years ago, the prevailing winds that blew up the Bay in the summertime came mostly from the south, according to Dr. Michael Kemp, a professor at the University of Maryland Center for Environmental Science …
Tweet

US Sailing - Sailor of the Week

US Sailing has announced that FBYC Member and Bermuda Race winner Rives Potts is Sailor of the Week. Their announcement follows:

With a victory margin of over three and half hours, Rives Potts sailed Carina, a 48-foot sloop, to victory at last months Newport Bermuda Race. Fifteen years ago Rives bought Carina, built in 1969, and has competed in the Newport Bermuda Races with her since 2000. During this stretch, Carina has won her individual class four times and the race once.

After winning the St. Davids Lighthouse Division, Rives attributes his success to a good boat, good crew and good lucky. In addition, Rives had a distinct plan when he set out for the race. After the …