Register today to race in the AOD Regatta, and to Volunteer! We need you!

We are only days away from the FBYC Annual One Design!  We are hosting the Hampton One Design National Championships this year as well!  Come join your fellow sailors on the course and at dinner!  The Hark will be playing music on the river bank, while we enjoy grilled bone-in chicken, scalloped potatoes, and grilled summer vegetables.  You don't have to race to buy dinner tickets, all are welcome!

Volunteer NOW! Volunteers like you make this event happen …

The 77th edition of the Annual One Design Regatta was certainly a hot one with 102 boats and a heat index approaching 20 degrees more than that at times.  Most of the racing was completed on Saturday in 8-15 knots of wind with Sunday's racing starting with winds around 11 and dying out as the day progressed.

Get your groove on Saturday night with The Slapnation Band www.slapnationband.com, playing at the Deltaville Ballpark from 6-9PM.  Bring a beach chair or blanket as well as your best dance shoes.  Adult beverages available.  Don't miss the chance to find yourself on the infield of this classic baseball venue for a rollicking good evening.  Drive into town and turn left on Ballpark Road or park across the street if lots are full.

AOD Just a week away

Our 77th Annual One Design Regatta is just over a week away and our fleets are forming for this summer classic.  Be sure to register your boat so your friends and out of town guests can see who's racing and get that early registration discount.

Details can be found here.

Fishing Bay Yacht Club's 77th Annual One Design Regatta is just around the corner and we wanted to let you know about a couple great ways to spend the weekend at the club.

We'll have two courses of racing with starts for Optis, Lasers, Radials, Front Runners, Flying Scots, a Portsmouth fleet and any other classes with 7 or more boats.  The regatta features 2 days of racing on the Piankatank River with Saturday dinner and drinks included in registration.  Online Registration before 8/8 requested.  (Notice Of Race)

Come spend the weekend being a volunteer and see the spectacle of 75-100 boats racing on the Piankatank.  This is a great way …

Registration for the 76th Annual Regatta on August 8-9 continues until late in the week at https://www.fbyc.net/Registration/entry?event_id=1425.  Early registrations do help those who plan the food!   Listed below are the boat numbers as of Sunday Aug 2.

There was a 2-3 day hiccough in the web registration process last week, but once it was reported, we got it fixed relatively promptly. The form had a …

Saturday's racing was all they wrote for the 2013 Annual One Design Regatta with mother nature not cooperating with enough wind to race on Sunday.  Trent Levy in the Optimist Class won the prestigous John R. Hawksworth Memorial Trophy as the winner of the most competitive fleet in the regatta.

While the Optis got in 3 races, boats on the other 3 courses were only able to race the two races on Saturday. The 74th Annual One Design Regatta is only a little over a week away. If you are planing on attending please register soon. This is always a terrific event and a great party. Everyone is welcome, you don't have to be a racer to attend. Sign up online.

#604 SOUTHERN BAY RACING NEWS YOU CAN USE

#603 SOUTHERN BAY RACING NEWS YOU CAN USE

73rd ANNUAL ONE-DESIGN REGATTA at Fishing Bay Yacht Club experienced thunderstorms and heavy rain on Saturday afternoon, but yesterday brought a gentle 5-8 from the North.  The 112 boat regatta raced on four courses including a special Optimist course for 17 youngsters.  The San Juan 21 fleet of 14 boats was sailing for the class (East Coast) National Championship. Branin Thorn won the spinnaker group title and Mike Evans the working sails group for 2012.  John Aras sailing in the Flying Scot Fleet won the John R. Hawksworth Trophy which recognizes the best sailor in the most competitive fleet. The winners for the classes racing are:  Front Runners (9 boats) – Matthew Braum ;  Typhoons …

The 73rd Annual One Design Regatta was a huge success with 112 boats racing.  Most fleets sailed 6 or 7 races and John Aras sailing in the Flying Scot Fleet won the John R. Hawksworth trophy.  Here is some video of the events including the rain shower that came in just after most of the boats had returned to the dock on Saturday afternoon.

#602 SOUTHERN BAY RACING NEWS YOU CAN USE

The Fishing Bay YC Sonar Team, Blake Kimbrough, skipper, John Wake, jib/bowman and tactician, and Matt Braun, middle crew, finished 7th of 17 at the Sonar New England Championship Regatta sailed this past weekend in Falmouth, Massachusetts. Races were conducted just outside Falmouth Harbor by FYC in moderate to heavy air and massive 3-4 knot Woods Hole current. The team was very competitive in boat speed and were 4th after day 1, but slipped to 7th on Sunday.

***STINGRAY POINT REGATTA – August 31 – Sept 2. Celebrate Labor Day Weekend at a long standing southern Bay regatta racing on the Bay (in the vicinity of the Rappahannock River) off the mouth of the Piankatank (Deltaville area), hosted by …

Annual One Design Regatta: We've Got an App for That!

Check out the design for the 73rd Annual One Design Regatta T-shirt. 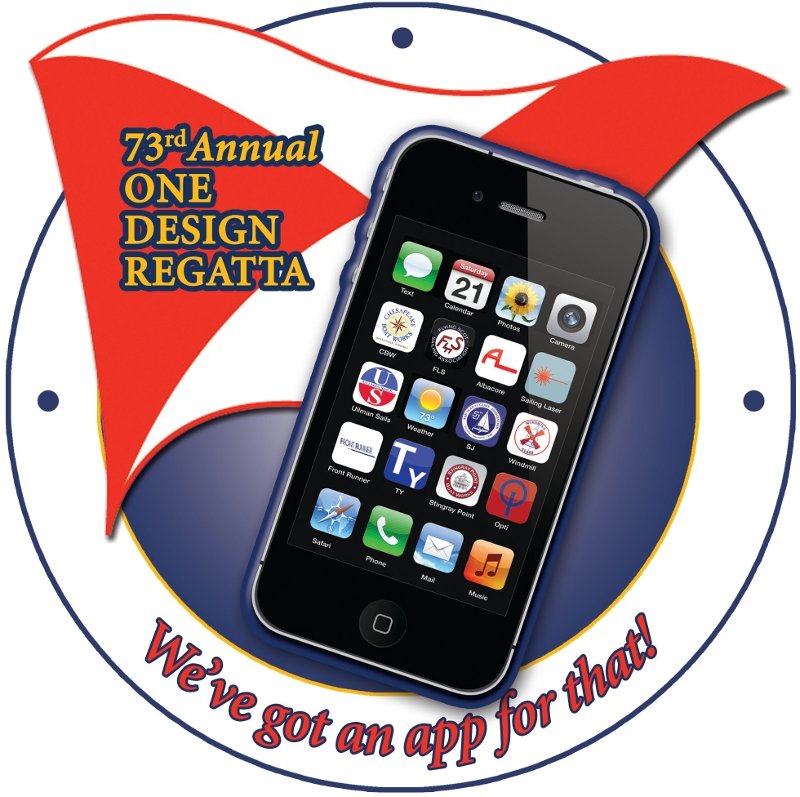 Advance ordering for AOD t-shirts is now available and supplies are limited.  Order your shirt by going to the registration page or email to david@blueprintingservicesva.com.  Prices are $15.00 for a cotton T-shirt or $27.00 for the long sleeve Micro Fiber shirt.

#554 SOUTHERN BAY RACING NEWS YOU CAN USE

TODAY is the final day for entries for CAPE CHARLES CUP, which is this coming weekend.

CAPE CHARLES CUP  (Saturday, Aug 20 - Sunday, Aug 21), the event where cruisers race and racers cruise [almost]  begins this Friday evening with the skippers meeting in Norfolk at Bay Point Marina, continues on Saturday with racing from Little Creek to Cape Charles, overnights (aka party) at Bay Creek Marina, and finishes with racing  from Cape Charles to Hampton (finish line off Buckroe area) on Sunday.   So, if point-to-point racing, a great party, great awards, T-shirts, hats, and all kinds of regatta stuff fits in your bag, the Cape Charles Cup is for you and your crew.  For details contact Scott Almond at (757) 471-2663 or CCCup …

The Sailing Events Committee has completed planning the sailing schedule for 2018 and all events are now posted on the website at https://www.fbyc.net/events/?year=2018.  Some of the events are:

Many events link to event webpages, but please understand most content on those page refer to the similar 2017 event. Over the next couple of …