This past Tuesday and Wednesday we traveled to Hampton for the Junior Olympic Festival. We brought Ashton Hudgins, Meg Roberts, Franny Kupersmith and Quentin Jenkins out for this fantastic festival. Highlights included Franny Kupersmith placing second overall in the Byte fleet, only a couple points away from winning the whole regatta! See Results for Bytes. She received a huge cup and an elegant medal. Also, Meg Roberts despite many boat difficulties, managed to place fourth overall in the competitive Byte fleet. See Pictures at HYC Web site.I would like to put out a special thank you to the Hudgins for having us stay with them for the duration of the regatta. Between their big screen TV and swimming pool …
Tweet

According to the official Screwpile Results Case Whittemore and Patriot received a First in Class among 7 J-29s at Screwpile. He was followed closely by Paul Anderson - 2nd - on Tittilation . Congratualtions to them both.

Patriot will soon be on its way soon to the J-29 North Americans to be held in Rochester, NY on August 16-18. Good Luck!

Fun in the sun

Some 67 members ranging from grandparents, who never miss an opportunity to be with their off-spring, parents who clearly enjoy their tasks, and kids who just roll with every punch, filled Fishing Bay with joy last Saturday. The event that brought the crowd together was a "Cruise with Kids" event Chaired by Kara and John Koedel, and Carey and Chris Gaenzle. There is little doubt that there will be a demand for a repeat in 2002. The crowd was supplemented on Saturday afternoon by the crews of 5 Flying Scots and 3 Lasers, after racing in the final Summer Seabreeze Regatta, ably managed by Debbie Cycotte and her crew as Race Committee and Brooks Zerkel as Social Chair. Somehow or …
Tweet

After braving a fierce lightning storm to start the race, the Solomons race fleet was becalmed just north of Windmill Point early Friday night. With predictions of light winds through the night, the fleet conferred by VHF, then a spokesman informed the event chair by cell phone that as of 2047 they were starting engines and withdrawing from the race. We wish them all good luck at the Screwpile Lighthouse Regatta and hope for better conditions next year.
Tweet

Highlights included Mark Buchanan placing third in the over twenty boat green fleet. Way to go Mark! Franny Kupersmith placed third while Eliza Strickland placed fourth in the competitive 10 boat byte fleet. Kathryn Clinard and Annie MacKinnon had an absolute blast. Quentin Jenkins got a taste of what being in the front of the pack is about when he rounded the weather mark 11th out of the fourty boat Opti red, white and blue fleet. Finally, Miles experienced why …

The Sailing Instructions for the race to Solomons Island, July 19-20, 2002, are attached as a PDF to this article. Important times include:
Friday, July 19
1700 Race entries due on board FBYC race committee boat, Mr. Roberts, located on the FBYC middle dock on Jackson Creek.
1700 Skippers meeting at FBYC on the lawn under the flag pole adjacent to Jackson Creek
1900 Warning gun for first class

43rd Mobjack Nationals will be in Delaware August 16-18

The 43rd National Championship for the Mobjacks will be held on August 16-18 at the Lewes Yacht Club in Lewes, Delaware. Lewes is located on the South shore of the Delaware Bay at the mouth - opposite Cape May, NJ and just north of Rehoboth Beach. For more information check out the Mobjack Web Site and the Notice of Race which has been posted.
Tweet

In big wind that made them forget the heat, Quentin Jenkins, Annie MacKinnon, Lina and Strother Scott sailed in the Virginia State Optimist Championships, Eliza Strickland, Andrew Wilton and Meg Roberts raced Bytes and Robbie Walker and Justin Wilton raced full rig Lasers. Eric Bokinsky organized the trip and coached while Alex MacKinnon, Ruthanna and Ron Jenkins, Strother Scott, Dick Cole and Tom Roberts spectated and helped out. There was big wind that kept racers from feeling the heat. They are shown relaxing on the lawn after racing. Great group of sailors! 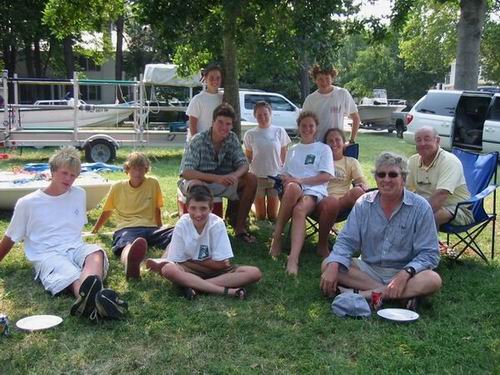 Juniors do SSA's Sandy MacVickar - West River is on Tuesday 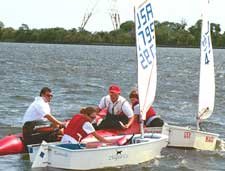 Yesterday Blake and Eric led our Junior Team to the Sandy MacVickar Junior Regatta at Severn Sailing Association in Annapolis, Maryland. Strother and Lina Scott sailed their Optis in windy cool conditions with a large fleet. They are shown getting a little advice from Blake and Eric between races.

Eliza Strickland and Frannie Kupersmith participated in the Byte Class. At the request of some members who felt the picture of last year's coaches on every Junior Racing Article of the web site was a little dated - I have replaced it with an image of Frannie and Eliza in their Bytes at SSA. As with any subject image, you can click on the picture to find all articles on the …

Will Crump engaged to be married to Marie Klok

On Sunday morning July 7, Will Crump proposed marriage to Marie Boserup Klok and apparantly the proposal was accepted.

Congratulatons - Will and Marie 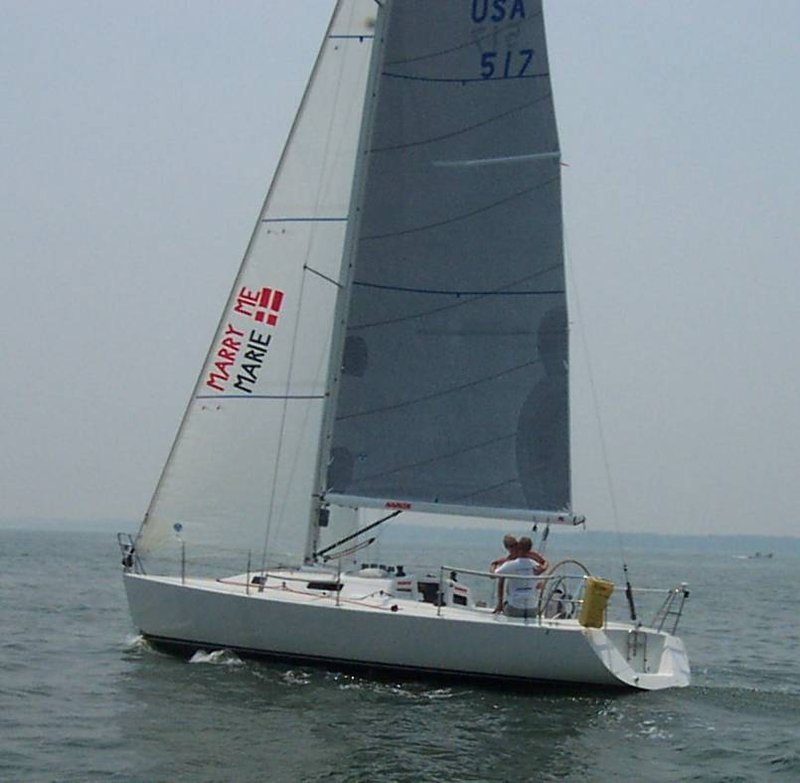 *BREAKING NEWS*
The Jury has reinstated Emily East and Hartley Meric (Fairhope YC) into race 5. East and Meric were recorded OCS by the Race Committee, but filed for redress claiming the the OCS was not warranted. The Jury agreed and has given the team their 2nd place finish for the race. This moves East and Meric into first place, just one point ahead of Derby Anderson and Lucy Kupersmith (Annapolis, MD). With one race to go today, only the top two teams of East/Meric (19pts) and Anderson/Kupersmith (20pts) have a mathmatical chance to take home the Ida Lewis Trophy.
THE RACE FOR PORTUGAL!
While the top two teams battle it out today, another race of significance will …
Tweet

Check out results to date 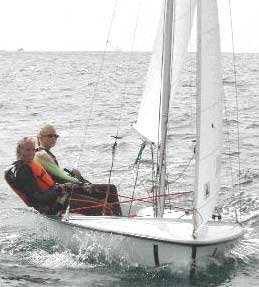 The Race Committee has held the competitors on the water for a 4th race. The wind continues to be steady at 15 knots with an occasional lull to 13 knots. The south south easterly breeze direction continued, however the velocity slowly dropped during the race from 15 knots down to 8-10 by the finish. That didn't seem to bother Derby Anderson and Lucy Kupersmith (Annapolis, MD) who sailed …

We had a great day today. Catherine Clinard sailed well in green fleet and came home with a fourth place trophy, which she was so proud of she cradled it in her hands the entire drive home!  Unfortunately she will need to have some fiberglass work done on the boat bow - she was on starboard tack and the little kid who hit her who was on port tack & did not respond to her yelling "starboard" at him.

Quentin Jenkins got a third place trophy in blue fleet. Eliza Strickland and Miles Kimbrough sailed an FJ belonging to NYCC because there weren't any other Bytes - they sailed without the plugs, which provided the coach boat an opportunity to help …

Update 7/10/2002 - the Boat has been found and returned intact Tuesday night - Thanks to all for your help. On July 4th Jay McArdle's powerboat was stolen out of his yard near West Point. Members of the club are asked to be on the lookout for it. It is a 21 foot DONZI center consol with a red Bimini top. 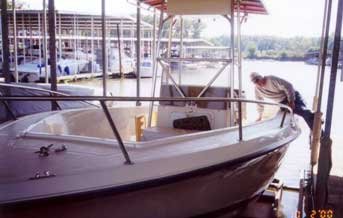 It has a white Johnson 225 horse outboard with a black stabilizer fin.

It is on a white tandem axle trailer. The name on the trailer is Yacht Club. The side of the boat has the name Donzi and the model number F-21 on it. 2 additional photos are under read more. It also has a yellow quick …

Fourty-three junior sailors hailing from Norfolk to Annapolis enjoyed a perfect day of racing during the FBYC Junior Regatta on June 29th. Under the direction of event chair Lud Kimbrough, Fishing Bay Yacht Club demonstrated it's commitment to junior sailing by providing three seperate race courses, free hamburgers and hotdogs after the racing, handing out 31 trophies, and FBYC Junior Racing "Cruiser Mugs" to all participants. Read on for details and regatta results
The Laser, 420, and Byte fleets competing off Stove Point on the big-boat course managed by event Race Committee Chair, Stuart Burnett. All three fleets got in six races with a mix of windward/leeward, modified triangle, and olympic courses. Races lasted about 30 minutes each …
Tweet