As a look out the window and see two Osprey hard at work rebuilding their half destroyed nest I am glad they survived and how lucky we all were just 36 hours ago  they seem quite content as they now have an unlimited supply of building material nearby. I decided this was the best time to put to paper the events while still fresh at mind. With the gale force winds Saturdays day of sailboat racing was cancelled so the Double Eagle crew went different ways with Sam and Carey Mitchener and Carrie Russell having a shrimp and crab cake dinner at my house. With the high winds and statewide threat of Tornadoes the conversation turned to what to …
Tweet

After a weekend of unprecedented weather in Deltaville that caused the cancellation of both opening day (storm) and spring series number one (tornado), the offshore fleet got what it hoped for all along, a bright sunny day with 15-20 knot winds oscillating just enough to make it interesting, and coming on just strongly enough to uncover the flaws in every crews' winter preparations. At the end of the day, Craig Wright's AFTERTHOUGHT took top honors in PHRF-A, Miles Booth's SHENANIGAN stood atop the PHRF-B fleet, and Brad Miller's SCHIEHALLION won PHRF-C.

Notable for her years of prior anonimity, Strother Scott's LOOSE CANNON arrived on course with letterring on her hull! LOOSE CANNON finished first in the …

#538 SOUTHERN BAY RACING NEWS YOU CAN USE As most of us are aware, a devastating tornado struck Deltaville on Saturday evening, April 16th. The Opening Day celebration was in progress at the club at the time. Many of our members sustained property damage of varying degrees. There are personal accounts of those directly witnessing and encountering the wind damage. At the time of this writing, no reports have been made of serious injury or fatalities in Deltaville. Gloucester County was not so fortunate.

Open to Members and Non-Members: After the days racing (or yard work), grab your favorite beverage and kick back in the Clubhouse with John McCarthy as he enlightens us on the practical procedures for a proper Protest. Let John demystify the process, because after all Gentlemen Protest Too! The discussion will include information on preparing, filing, and participating in the protest hearing so you know what to expect when you need to.

Well serve a delicious lasagna and salad dinner immediately following the discussion to cap off the evening. Dinner is open to Members and Non-Members: $5 per person Advanced reservations required at http://www.fbyc.net/Registration/rememberEvent?event_id=1089.

Activities will start after the Offshore racing, but …

By Andy Jenks
DELTAVILLE, VA (WWBT)  Tuesday, the National Weather Service confirmed a separate, EF2 strength tornado (winds up to 135 miles per hour) was responsible for widespread damage in Deltaville, part of Middlesex County.
Deltaville is known for the water and the boatsuntil Saturday, when it became known for something else.
"As you can see, all the trees are destroyed and splintered," said resident Lydia Strickland.
It seems as if the entire town is cleaning up now. And really, there isn't much choice. Lydia gave us a tour of the worst areas.
"It's just hard to believe that there were two people in that house," Lydia saidpointing out a residence where the exterior walls were …
Tweet The Blue Shape is path observed on ground and in WAVY video by Strother Scott. Yellow lines are the edges of the path per Glenn Nix's map in the Southside Sentinel - Red Crosses are "approx" location of destroyed houses marked on the Glenn Nix map. It is very difficult to match up the houses on the map with the Glenn Nix destroyed houses - so please interpret a Red Cross as a "House near the cross was destroyed".

The Google Map can be accessed here

A Map showing house by house status from the Southside Sentinel More Photos of the damage

A Jackson Creek Condo contractor reports Route 33 is open through Deltaville and power is restored to Condo area and maybe all of Stingray Point. Based on personal observations yesterday and the WAVY aerial video http://www.wavy.com/dpp/news/local_news/chopper-10:-storm%27s-aftermath I am guessing that the blue shapes on this google map show the path the tornado followed.

You can look at the Google map here.

After "Blessing of the Fleet" today, Deltaville was hit by a tornado. It really sounds like a train racing towards you. Having dinner at friend's on Moore's Point, I felt the wind velocity intensify and saw a "white hole" ...not a hole really but the tornado. We literally dove for cover in the basement and a split second later, the tornado touched down on my friend's home and blew the doors, windows out. Looks like a war zone. Much of the contents of the house were strewn across the front yard and huge tree tops twisted off …

Alex Alvis just called and asked me to notify everyone that FBYC has decided to cancel the offshore racing scheduled for Sunday.

It is a beautiful day today, but a tornado did come thru Deltaville last night and did substantial damage to the town, the Zoar Baptist Church - pictured below, and destroyed several houses. The Southside Sentinel has a pretty complete update at http://www.ssentinel.com/index.php/breakingnews/article/storm_damage_in_deltaville_and_gloucester/

Alex asked that those in Deltaville today dedicate their efforts to helping those in need in town and cleaning up the club. If you do drive around, please be careful about downed power lines.

Lots of pictures of damage as of last night at https://www.facebook.com …

A tornado went through Deltaville around 8pm this evening. Fishing Bay Rd is currently blocked between Powells Marina Rd and Deagles rd. Everyone at opening dinner/party is safe. There are reports of homes near 33 that were leveled. Stayed tuned to our facebook page and twitter feed for further updates.

Update 10:55 pm, based on various reports of damage, here is where *I think* the tornado went through from south west to north east Update 11:35 pm: based on more recent reports the path would have been a smidge to the right as if the line were directly over the road name 'general' at the top of the image.

Please note I was not in Deltaville, and …

LAST CHANCE REMINDER - Opening Day and Blessing of the Fleet

Opening Day and Blessing of the Fleet 2011

Racers, Cruisers, and Jrs, everyone is invited and encouraged to bless the fleet and enjoy this incredible event. Make Plans to attend!

#536 SOUTHERN BAY RACING NEWS YOU CAN USE

After suffering a mell of a hess last spring upon encountering  "an uncharted rock in the Baltimore Channel entrance of the Chesapeake Bay Bridge-Tunnel. . . ",  Flying Colors, Richard Payne's J105,  is home and racing.  That's a good thing!
Try sailing - it's NOT easy! - Bill Schanen, SAILING Magazine
CCV Spring Series  opened yesterday to near perfect breezes and tolerable temperatures.  Twenty-eight (28) race boats, crews, and skippers took to the course and got in two races in Hampton Roads harbor.  While all five (5)  Spring Series races are scored separately for final Series awards, there are also daily awards for each of the three days of racing.  Award winners for …
Tweet 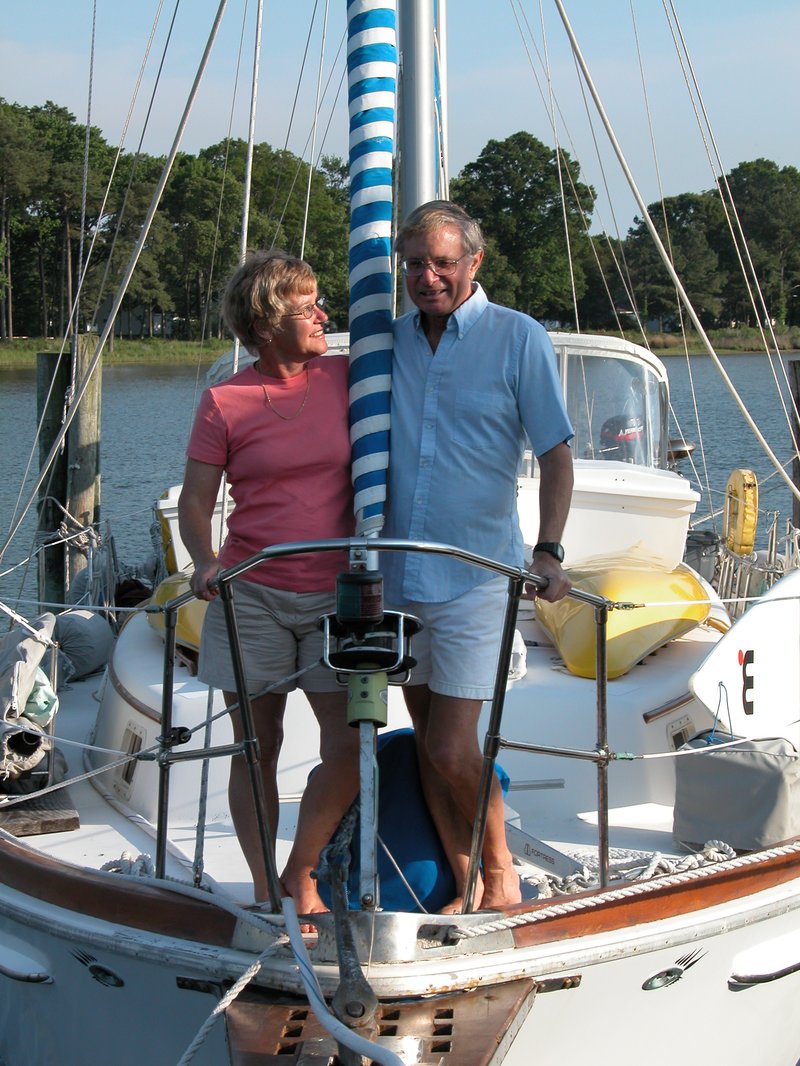 SunTrust Bank, repeating Presenting Sponsor of this years Leukemia Cup, will host Tom & Mel Neale for the Cups kickoff event at the banks corporate office in downtown Richmond on Thursday evening, May 19. Mark your calendars now!

Tom and Mel write the Tom Neales Cruising for You section for BoatUS @ www.boatus.com. Tom is …

New US Regulations - Your Chance for Input

Having recently imposed new regulations for the commercial marine industry and boatyards, the Federal EPA is now focusing its attention on recreational boating. As we are learning, the members of the EPA panels responsible for these new regulations are not necessarily knowledgeable about sailors, sailboats, or the seamanship that we practice.

FBYC members have an opportunity for input. What follows is a communication from BOATUS listing links that will enable you to have a voice in this important debate of vital interest to FBYC sailors:

"The U.S. Environment Protection Agency (EPA) is developing future clean boating requirements for all recreational boats in the next few months, and they need to hear from you. During April, they are hosting weekly …

The Notice of Race for the Laser District 11 Championship & US Sailing Singlehanded Championship Area C Elimination has been posted and online registration is now open. The program will include starts for both Standard Rig boats and Radials.  If 5 4.7s register, there will be a start for them too.  The top finishing male entrant in the Standard Rig fleet and the top female from the Radial fleet will qualify for the US Sailing Singlehanded Championship in July.  There's also 20 ILCA-NA Grand Prix points up for grabs in each of the fleets.

Fishing Bay Yacht Club in Deltaville, Virginia will be hosting the regatta on May 14-15 and has a fantastic program lined up. FBYC is …

#535 SOUTHERN BAY RACING NEWS YOU CAN USE

Try sailing - it's NOT easy! - Bill Schanen, SAILING Magazine
PHRF SAYS YOU MUST HAVE A PHRF RATING FOR THE PHRF FLEET IN WHICH YOU PLAN TO RACE.  That is to say, if you are racing PHRF Non-Spin, you must have a PHRF Non-Spin rating (a PHRF Spinnaker rating will not do!)  If you are racing in a PHRF Spin fleet, you must have a PHRF Spin rating (a PHRF Non-Spin rating will not do!)  PHRF is very clear about this.  If you do not have the rating you need, call PHRF at (410) 414-3270.  Don't be left at the dock - get this straight now, time is a' wasting!
THIS SATURDAY     Race …
Tweet

4/2 Photos from Around the Club

Just some photos from things going on around the club on Saturday, April 2.