We are going to close on-line Registrations for Stingray Point Regatta on Thursday morning at 9:00AM. We have to turn in the food counts to the caterer who will be off to the supply house Thursday morning.

If you are in the neighborhood of the club tomorrow evening between 6-8, stop on by and have an adult beverage! We are having a casual kick-off for the weekend. It will be a limited offering, but it would be nice to see you.

If you would like to add to our dinner counts for Friday and/or Saturday, please send me an email by tomorrow a.m. at 9:00 and also register on line (so the paper work can be …

Dredging continues in Jackson Creek but the good news is the channel is much improved and the dredging work doesn’t block the channel.

Due to the challenges of Irene, some of our volunteers are not going to be able to help out at the Sunday afternoon family picnic.  If you could donate about three-four hours on Sunday afternoon please be in touch with Abigail Whorley.  Akwhorley@gmail.com. 804-357-3240. It will be fun, and thanks! 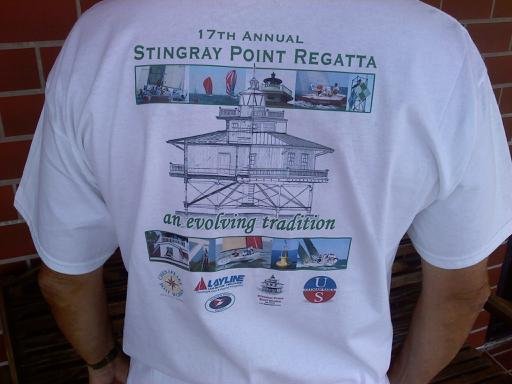 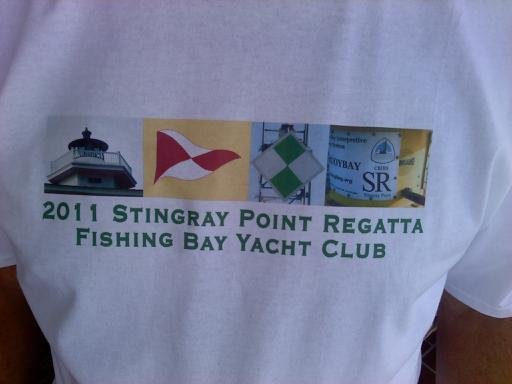 Stingray Regatta Garments-   White Short Sleeve Cotton Tees and Long Sleeve Technical Shirts, with the accompanying design, will be available for purchase at the regatta site.  Following robust on-line sales, these garments will be available in somewhat limited quantity, so you …

Despite Irene's powerful winds and resulting tide surge, The 17th Annual Stingray Regatta will be held!

The full agenda from the party Thursday, Friday and Saturday evenings through the Labor Day Cookout and Awards Sunday are a GO!!

If you have not registered for the Dinner Saturday night or the Labor Day Cookout on Sunday,  please do so immediately!

See you 'all this weekend

Members in DVL for Irene use Channel 72

All One Design Races Canceled For This Weekend

ALL One Design races scheduled for this weekend at FBYC have been canceled. This includes the Geezer Regatta and the Deltaville Regatta-Fall Series #1.

An earthquake & hurricane...what other natural forces will conspire against our RumLine (Geezer) Regatta scheduled for this Saturday, August 27? After due deliberation with FBYC's Chief Meteorologist David Lee and heeding the ominous predictions of Irene's storm track this weekend, we have decided to cancel the Club's premier event of the year for "skippers over 60."

While there is still the possibility that Irene will veer dramatically eastward leaving us with glorious sailing conditions on Saturday, that probability is looking less and less likely. Many of us will no doubt are busy making storm preparations this weekend rather than tuning up our boats for the big regatta. Therefore, to eliminate some of the uncertainty over unfolding … 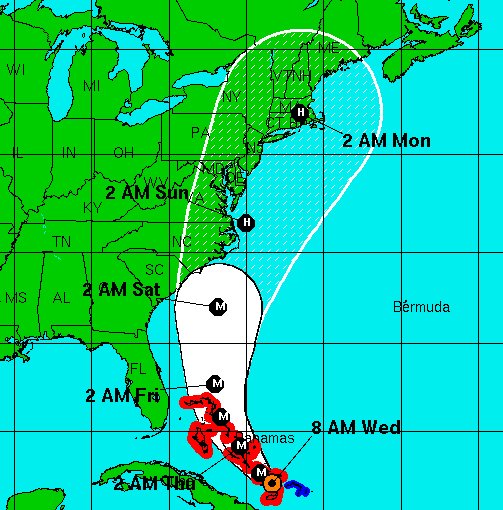 The current storm track for Hurrican Irene shows it passing just to the east of the Virginia Coast on Sunday.  Although we will likely be spared the worst of it, we are still expecting severe conditions.

Just a reminder that all slip holders should make plans to reinforce all dock links and are responsible for their boats and any damage they cause.  FBYC does not have the resources nor responsibility to look after all of the boats at our docks.  The same is true for any boats in the dry sail lot and small boat parking lot - please secure your boats well ahead of the storm.

The Notice of Race is up and Online Registration is now open for the 30th Chesapeake Bay Laser Masters Championship to be held October 15-16 at Fishing Bay Yacht Club.  This regatta has been a yearly tradition for sailors over the age of 35 on the Chesapeake Bay and beyond. This year we're expecting sailors from New England and Texas. Not only will we have great racing on the water, but we’ve got a great dinner planned by none other than our own Alain Vincey.

Fishing Bay Yacht Club is located in Deltaville, Virginia.  It's a short drive east of Richmond VA and under 3 hours from Washington DC.  FBYC has beach launching, plenty of room to rig …

#555 SOUTHERN BAY RACING NEWS YOU CAN USE

FEATHER and CYMRU take CAPE CHARLES CUP!  A fleet of 87 boats, racers, cruisers, and multihulls,  left the western shore Saturday for the Eastern Shore and an overnight at Cape Charles.  There were 33 boats racing in the PHRF Division fleets, 52 in the Cruising Division divided among 3 fleets, and 2 multihulls.  The race over was a typical high summer race - delayed start due to  light air, shortened course, great party. The trip back on Sunday (Cape Charles to Hampton) was another story - wonderful breezes all day, but a mid afternoon, fast moving thunderstorm that tested skill and grit.  The Cape Charles Cup is a beautiful Weems and Plath glass and brass  lantern that is awarded …

The Early Entry period for the Stingray Point Regatta has been extended to Midnight, Monday, August 22. Take advantage of this discount opportunity and get your registration in now by going to the Stingray "Sign Up"  link. Stingray Point Regatta - Events For All The Family

The purpose of this email is to announce a dramatically enhanced Stingray Point Regatta designed to not only be a first class sailing event, but a fun weekend for  members to spend their Labor Day weekend at  FBYC. You don't have to sail to help celebrate! Get off you boat in Jackson Creek, walk across the street, and join in the fun! Skippers, please encourage your crew to join in the festivities.

The three families represent a dynasty of sailors for Newport Rhode Island. Rives Potts has competed in several America's Cup campaigns. Potts sailing Carina is a veteran of 20 Newport Bermuda Races and has won the coveted St. David's Lighthouse … 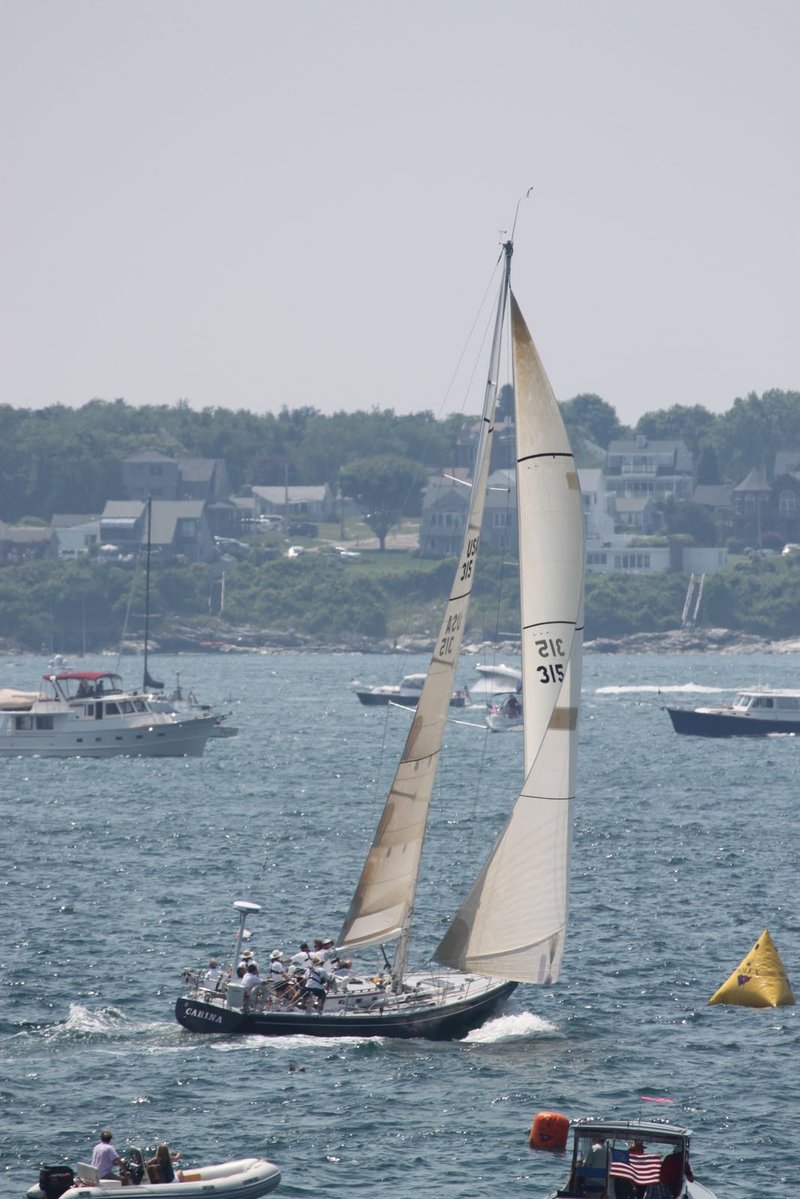 Carina finished the 2011 Fastnet Race overnight, and the preliminary results show her 1st in the 72 boat IRC 2 Class and 5th overall - out of about 250 IRC boats.

Congratulations to the entire crew and particularly  to the several FBYC members on Board - Skipper Rives Potts, his son Walker, and FBYC Log Streamer Cyane Crump.   Surely we will expect an exciting article by Cyane in a soon to be published issue!

Carina rounded Fastnet Rock 2nd in IRC 2 and 18th in Fleet, so she improved her position on the trip back across the Celtic Sea and around the Scilly Isles and Lands End to the finish at Portsmouth.

Meanwhile - Rambler 100 has been towed to Ireland … 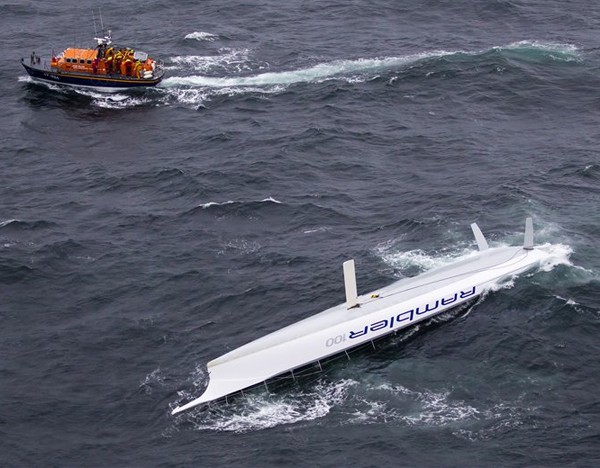 Carina is doing very well on Tracker - about halfway to Fastnet Rock and in Third place in IRC2.

The first boat to finish was a trimaran - who beat the course record. We understand the dredging of Jackson Creek is progessing pretty well and pending breakdowns will be finished well before Labor Day.

The Jacskon Creek webcam - started during the OptiNationals is still operating.  And you can watch the dredging live on it at the Optinationals Webcam page.

It is slow to load but it should show up as seen in Screen shot.

#554 SOUTHERN BAY RACING NEWS YOU CAN USE

TODAY is the final day for entries for CAPE CHARLES CUP, which is this coming weekend.

CAPE CHARLES CUP  (Saturday, Aug 20 - Sunday, Aug 21), the event where cruisers race and racers cruise [almost]  begins this Friday evening with the skippers meeting in Norfolk at Bay Point Marina, continues on Saturday with racing from Little Creek to Cape Charles, overnights (aka party) at Bay Creek Marina, and finishes with racing  from Cape Charles to Hampton (finish line off Buckroe area) on Sunday.   So, if point-to-point racing, a great party, great awards, T-shirts, hats, and all kinds of regatta stuff fits in your bag, the Cape Charles Cup is for you and your crew.  For details contact Scott Almond at (757) 471-2663 or CCCup …

Many of our visitors need overnight accomodations near Fishing Bay Yacht Club, so we try to keep an up-to-date list on our Accommodations page.   Last week the Southside Sentinel had an article about a new one, the Bethany Inn at Leafwood - in Saluda.  We have added it to the list we maintain.

We hope this list helps our visitors find places to stay near FBYC.

We are cutting off the on-line registraton for the 72nd Annual One Design Regatta at 8am on Friday morning.  If you don't register by the cut-off, you are invited to show up in Deltaville and register and pay at the event.  Many Thanks.

Southern Bay Racing News You Can Use #553 ALBACORES and BARNEY HARRIS win 47th VIRGINIA GOVERNOR'S CUP.  Sailing in extremely stiff wind (18 - 25 knots) and rough seas on Saturday, and in extremely hot temperatures Sunday, a tough group of 55 small boat sailors raced their brains out on the Ware River over the weekend.   At the end of it all, the Albacore Class got in the most individual starts (among class members) and, therefore, the winner of that class, Barney Harris and crew Leigh (1-2-1-1-1) carried home the  Gov Cup keeper.   This was the 47th time Ware River Yacht Club has run the Governor's Cup.  CLASS WINNERS:  Albacore (12 boats): Barney Harris and Leigh;  Buccaneer (7 boats): Jeffrey Moore and Jolie Homsher;  …

Pictures of the Dredging of Jackson Creek that is still underway: The crew of "Prophet" (Sonar 725) enjoyed the 2011 Marblehead NOOD on July 28-31 at the splendid Corinthian Yacht Club at the tip of the Neck in Marblehead, MA.  Noel Clinard and Lud Kimbrough towed the boat up, and Noel back, for a trip of 1465 miles.  Mike Karn flew in to Boston and Paul and Julie Ann Wash drove separately.  Lud, Noel, Mike and Paul sailed in a fleet of 24 Sonars skippered by many of the best members of the class, while Julie Ann tended our needs ashore and saw every sight (and whale) withoin 100 miles.  Although the results were humbling: (22-22-18-20-21-23-12-[24]-24) they improved their understanding of the finer points of …

#552 SOUTHERN BAY RACING NEWS YOU CAN USE

There's a whole lotta racing goin' on on the southern Bay this coming weekend, so if your boat floats, git on out there.  Summer is too short to miss!
ADMIRALS CUP REGATTA, THIS Saturday, August 6  -  York River Yacht Club and Seaford Yacht Club combine on this annual favorite York River area event.  The race starts and ends at the Thorofare Entrance area.  The post race SUMMER PARTY is at Seaford Yacht Club (happy hour is at 5pm and dinner is served at 7pm).  The party theme is Caribbean, so dig out those flowered shirts and think the islands, Mon!   For post-race docking and party info, contact SYC Chuck Eldred.  To make …
Tweet