(REVISED) FALL RACING SCHEDULE FOR OFFSHORE AND ONE DESIGN FLEETS

As promised, we are announcing the revisions to the fall racing schedule as a result of the dispurtions of Hurricane isabel.

ONE DESIGN:
Fall Series 4 will be sailed as scheduled this Saturday, October 4.  Fall Series 2 and 3 will not be made up, but …

#169 SOUTHERN BAY RACING NEWS YOU CAN USE

SCHAZAAAAAAAAAAAAAAM!  The power came on at the Southern Bay Racing News You Can Use computer location late last night, Thursday, September 25  (one week from Izzy's arrival)!  Most of us had a severe scare with this one and a number are still suffering the aftermath and will be for some time to come.  Stick together.  Southern Bay area sailboat racers and friends are a tough nut to crack - even for a hurricane!  As far as we know at this point, we are all still here.

Here's some reminder info for all:

A couple tidbits from the Wakefield NOAA Storm Report at http://www.erh.noaa.gov/er/akq/wx_events/hur/isabel_2003.htm .

The highest gusts. GWYNNS ISLAND VA (MATHEWS CO.)107 MPH at 0042 9/19 Sustained winds and gusts RICHMOND INTL ARPT 38 73 0013 UTC (KRIC) WINDMILL POINT VIRGINIA RECORDED MAXIMUM WATER LEVELS AROUND 3.5 TO 3.8 FEET MLLW.The Wakefield office of the National Weather Service has posted a preliminary Post Storm Report at http://www.erh.noaa.gov/er/akq/wx_events/hur/isabel_2003.htm . It includes some data from all over about the storm

Many members have been back to Deltaville to check their property and help clean up debris since Isabell left last Friday. And those who live there have certainly had their fill of clearing roadways, removing trees from their homes, and living without power and water.

For this coming weekend all racing has been cancelled and all members are invited to the club to help clean up debris and repair docks starting at 8.30 am Saturday. After two days of concerted effort we will be in a much better position to decide on whether we can hold any more races in 2003 for trailered One Design boats starting on October 4. But an announcement on the schedule, for both the …

Many members and employees in Deltaville are without water and power. Please help them by taking bottled water to the club when you next visit. We'll find a way to get it to the needy, and your concern will be appreciated. Let's go with at least four one gallon bottles per vehicle. And least you wonder while we have some 11M gallons of treated water in our storage tank we cannot access this until power is restored.
Tweet 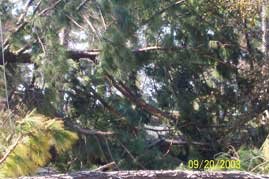 The club came through Isabels rampage with no obvious damage to any of our buildings, but with major damage to the Fishing Bay dock and the East dock on Jackson Creek. As of Saturday the road along Fishing Bay had been cleared of downed trees allowing ready access to the club. Those few who visited the club that day had a taste of what to expect after seeing downed trees on the drive to Deltaville, and the carnage exacted on many of the docks on Fishing Bay. Three large pines near the water tank fell into the Jackson Creek parking lot, and some trees on the Stull property fell over the fence dividing FBYC property from our new neighbor. As …
Tweet

This is a link to some photos I took on Thursday during the storm. The PASSWORD is "topgun".http://homepage.mac.com/ddalessandro/PhotoAlbum14.html
Tweet

Bouy #41002 is about 200 miles SE of Hatteras. Looking at the four graphs in Read More which were as of 10AM this morning, you can see that the air pressure dropped dramatically and now is rising again, the wind has shifted from the NE to Westerly.

You can also see the wind gusts have peaked at 65 Knots and the wave height at about 30 feet. 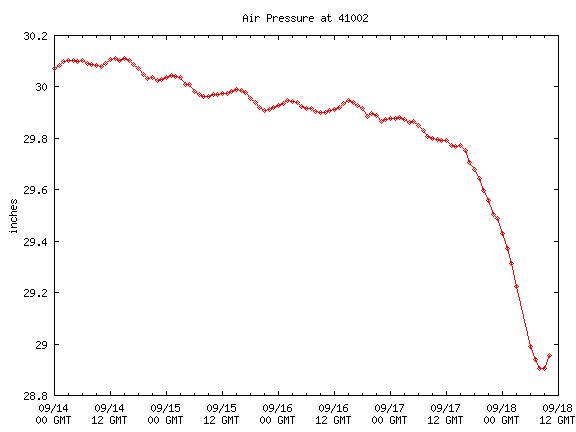 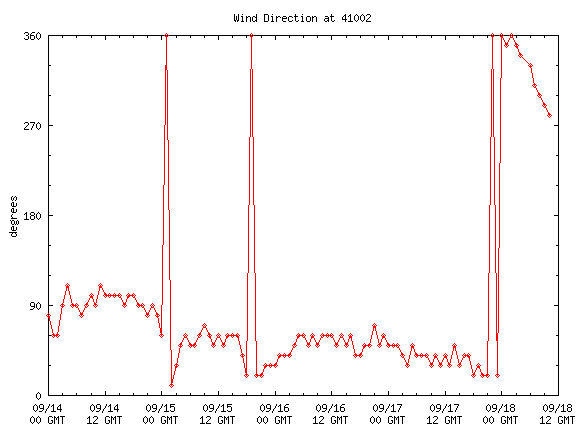 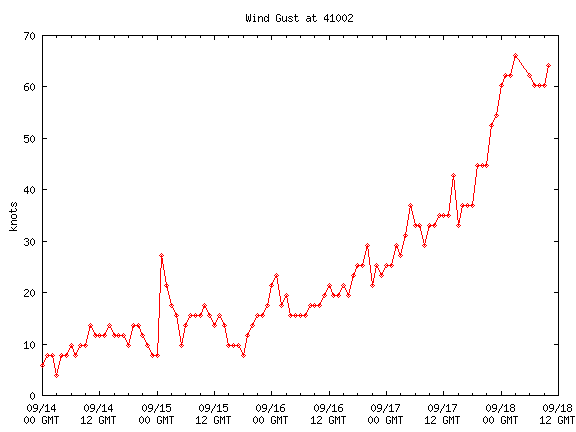 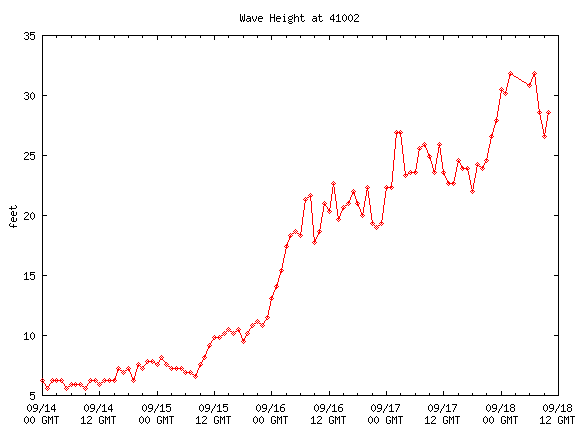 NOAA has a number of weather buoys off the east coast. You can check out your choice at http://seaboard.ndbc.noaa.gov/Maps/Southeast.shtml . The pages are very slow to load in your browser.

The National Hurricane Center now projects the storm track to come through Richmond about midnight on Thursday night, which means the strong winds to the east of the eye would be near Deltaville. For the latest projected track -updated several times a day - please visit this site. or check out the historical movement of the forecast. or click Read More for the 5 AM Tuesday bulletin.

A HURRICANE WATCH MAY BE ISSUED FOR PORTIONS OF THE MID-ATLANTIC COAST LATER TODAY. INTERESTS FROM THE CAROLINAS NORTHWARD TO SOUTHERN NEW ENGLAND...ALONG THE COAST AND INLAND...SHOULD …

#168 SOUTHERN BAY RACING NEWS YOU CAN USE

Mark this CHANGE on your CCV Fall Series Racing …

Hurricane On The Way?? --Make Sure Your Property Is Secured

Notice to all members who have boats in slips, drysail or the small boat parking area in front of the new clubhouse: With the storm warnings we have all read, seen or heard about comes yet another warning. You are responsible for the security of any boat stored on club property. You would be well advised to insure your docklines can be adjusted from the dock, to remove roller furling head sails, main sails and other items that create windage. For boats on trailers and racks, you would be well advised to remove covers, drop masts and tie your boats down. 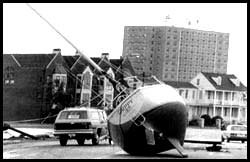 Many members have already taken these precautions and others are removing sails, etc. If you plan to take your …

The correct/revised NOR for the weekend's Smith Point Race (or the real Moonlight Race) is attached, or may be accessed at the events link at the top of the homepage.
Tweet

Stingray Pt. Regatta, view from down under 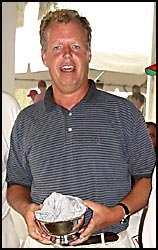 Hospitality sounds like an understatement, we Southerners got more than the full treatment at the Stingray Pt. Regatta. Sure FBYC is not responsible for the weather, even though it was outstanding. Those responsible for water (or liquids) on the boats most likely got an earful on Saturday. Thanks to your swimming pool the heatstroke and dehydration could be treated. No, even us Southerners knew better than to drink from the pool. Enough coolers along the pool side helped to revitalize those dried prunes (formerly brains).

Yes, it is nice to see the Titillation crew perform on the race course, but they are even better on the dance floor (if that is possible). For those who missed it, show up at …

Since we didn't get it for the Moonlight Regatta, the make-up date for the full moon is the Smith Point Race, this Sat., Sept. 13th. This race is a little more of a challenge than last month's nocturnal fun, but an enjoyable and worthwhile venture.
Some slight additions and changes to the sailing instructions are listed:

Beer and soft drinks will be on ice at the clubhouse starting at 11:30am on Saturday. Bring your own lunch and eat at the clubhouse at Noon with your fellow adventurers before we set out for the first warning at 1400 hours (same as original.)
Dinner will be drop shipped to your boat by helicopter around 1900 hours.
On Sunday morning …

From Ted Morgan, Laser District 11 Secretary Fishing Bay Yacht Club hosted the 2003 Master Atlantic Coast Champs this past weekend.  29 boats showed up for 6 races.  The ever shifty winds were out of the N/NE at about 8mph the entire weekend.  There was just enough wind to make you want to hike out...just not enough to allow you to hike out for more than a couple of seconds.

FBYC has agreed to be the host Yacht Club for the first annual Virginia Institute of Marine Science raft up. It will take place October 4th begining at 1700 hours including a dinner put on by Toby's followed by a band. On the 5th there will be a breakfast begining at 0800 hours.

You will be able to view VIMS exhibits and talk with their staff about reasearch projects. There is no charge for attendance but a donation to VIMS would be much appreciated. Make reservations through Mimi at VIMS (804) 684-7784 or email: mimi@vims.edu. More details are in the September Log on Page 7. Lets have a good turn out in support of VIMS.

#167 SOUTHERN BAY RACING NEWS YOU CAN USE

Southern Bay "Youngsters" Out There Racing: Chris Behm (Hampton Roads Academy/Hampton)  finished 6th in the Bemis Nationals and 2nd in 420 North Americans in Canada.  William Bomar, who sails with his dad, Alan Bomar, on their J/24, roundabout,  struck out on his own and won an inaugural Optimist regatta held at Two Rivers Yacht Club (Governors Land/Willliamsburg) this past weekend.  Two Rivers YC hosted their first Summer Junior Program, which was administered by Premier Sailing of Irvington (Phil and Arabella Denvir, owners).

September 11, 2001.  This Thursday will mark the second anniversary of that horrific event.  Since then most racers sail with a more intense appreciation of the freedom that characterizes … 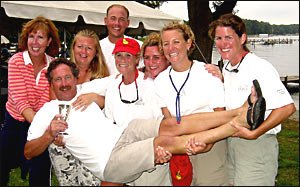 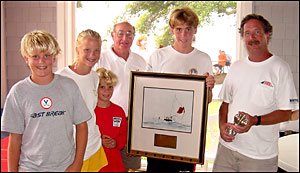 Over 45 boats sailed in this years regatta representing 5 classes. Presiding over a packed clubhouse, Mike Karn, with Dick Cole and David Hazlehurst, conducted a festive awards ceremony. First place in the J24 Division went to Will Crump. Christian …

Larry Cohens Dawn Treader, sailing under the FBYC burgee and with three other Fishing Bay sailors on board, sailed to a second place finish in Stamford Yacht Club's 238 mile Vineyard Race over Labor Day weekend. Sailing in winds that varied from 4 to 22 knots, Dawn Treader completed the race in just under 39 hours, to finish second in the five boat IMS Cruiser/Racer class, in which two of the other competitors were candidates for the Northern Ocean Racing Trophy.

The second place finish, coupled with a first in class in the Annapolis-Newport Race and a fourth in class in the Marblehead to Halifax Race, earned Cohen and Dawn Treader the 2003 Northern Ocean Race Trophy …

The August 29 issue of Scuttlebutt had a novel item on why it is important to stay in your boat when it's under power. And in today's issue a reader commented on the marksmanship skills of the Greek Coast Guard with the admonition "terrorists beware!" Food for thought.

COACH BOATS
During the Saronikos Gulf regatta in Athens, in early August, the Austrian Tornado coach was tossed out of his boat in high waves while heading to the course area. He did not have the kill switch cord attached to himself, so the boat kept running, directly at the Mistral fleet (approximately 80 boats). So with no one driving, and the boat a threat to the Mistrals, the Greek …

Southern Bay Racing News You Can Use #166

2003 STINGRAY POINT REGATTA OVERALL CHAMPION IS TITILLATION - The red J/29, Paul Andersen's Titillation, with it's [almost] all women crew, has a long history of manhandling it's competition in regattas. The winners of this year's Stingray Point Regatta in Fishing Bay on Labor Day weekend showed their stuff by trouncing B fleet with a four race showing of 2-1-1-1. In so doing, Titillation won the coveted overall best boat and the Brent Halsey, Jr. Memorial Trophy. Scorching temperatures (97 degrees) on Saturday with moderate breezes from the southwest gave sailors two good races on opening day. After a whopper thunderstorm Saturday night, cooling conditions, but no rain, changed Sunday's race course entirely, and brought …
Tweet