#158 SOUTHERN BAY RACING NEWS YOU CAN USE

Please visit Duct Tape Club - Vote for Meg Roberts page . I need your votes before the 29th!!! All You have to do is go to this page (3rd picture on the 2nd row), check the "cast your vote" box under our picture, then enter your email address. After that you fill in a brief survey and thats it!

If you do, my date and I could each receive $2500 in scholarship money! PLEASE VOTE 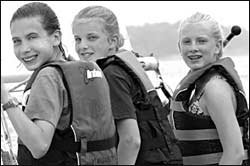 Many of you had the chance to see Guy Crittenden's photographs of sailors at Junior Week and OptiKids. His computer slide show was one of the highlights of Thursday and Friday afternoon. Parents and sailors got to watch a show of the day's pictures hours after they were taken. All of Guy's Junior Sailing photographs are now available to purchase on-line at his website, www.crittendenphoto.com. Click Read More... for details on how to view and order.

Go to "EVENTS" and click on Junior Sailing to get information on how to buy prints of your children. The links will take you to Pictage.com, our on-line digital print lab. Type in FBYC in the search field …

FBYC To Race Against Rappahannock YC on Sunday

The One Design Division has scheduled Team Races against Rappahannock River Yacht Club.

The first series will be on Fishing Bay this coming Sunday, June 29 starting at 11.00. The races will be run in Flying Scots sailing without spinnakers. Spectators, preferably out on the water, are welcome, the only request being that they do not interfere with the racing in any way. For example sailboats should drop their sails within 150 yards of any competing boat, and helicopters are discouraged. Please come out and cheer your team. And four weeks later, sail or motor up the Rappahannock River until you see the away event an cheer your team on again.

This has all the makings of being another …

The program ended with heartfelt cheers led by David Hazelhurst, hugs, and even some blown kisses as Juniors and Staff wrapped up another successful Junior Week. But as David Hazelhurst says, "it's not over yet." Click the Calender icon to see the Junior Sailing/Coaching Calendar for the rest of the summer or download the PDF file for a hard copy .

The 2003 Group photo is posted on this site in 3 formats and can be downloaded for member's use by clicking on the following links: (1)the original full-sized digital photo (2 MB) ,(2) a high-resolution file …

#157 SOUTHERN BAY RACING NEWS YOU CAN USE

BLUEWATER RACING:  Marion-Bermuda Race Update:  Mark Wheeler, our embedded crew/e-mailer on Pete Savage's Oyster 62, Venture, reported that as of yesterday morning (Sunday, 1000), they were 290 miles away from Kitchen Shoals Light (a mark north of Bermuda).  They were experiencing a nice ride in the Gulf Stream, but expected to abandon it soon.  By the 0300 report today Mark said they were "...working through the favorable side of a cold eddy south of the Stream."  By now they have less than 200 miles to go.   This is the 14th running of the "every other year" race that runs from Marion, Massachusetts, to Bermuda.  There are 78 boats entered this year …
Tweet

It's Not Over Yet 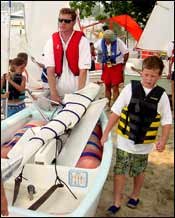 You name it, it's happened since the first weekend of Opti Kids, already documented on the web for those who can't wait for the next Log. And on the first weekend, our first Team Sailing event with all seven 420's in the water. Another first! A repeat the following weekend, with a second session of Opti Kids and Team Sailing, and a get together for the Junior Week staff--their last night before the most important people arrived, their customers.

Not exactly the best conditions for the first three days, primarily a little too much rain. But this did not faze any of the participants. And unless you have lived through a Junior Week, it will be hard …

This to inform your members that the National American Schooner Association is forming a regional chapter and is inviting all intersted schooner owners and everyone else who just loves schooners and traditionally rigged vessels to join the fun!

The American Schooner Association (ASA), home based at Mystic Seaport, Conn. announces the formation of regional chapters. The first ever chapter to be formed is the Mid Atlantic Chapter, which will serve the states of Maryland, Virginia, West Virginia, Delaware and Southern NJ. The ASA is an organization established in 1972 which fosters, promotes and encourages interest in the preservation, traditions and enjoyment of schooners and traditionally rigged vessels. The ASA is a …

#156 SOUTHERN BAY RACING NEWS YOU CAN USE

ESSO BEE  WINS 2003 BLACK SEAL CUP: Greg Miller brought his Lindenberg 26 North from the Pamlico Sound and took home the Black Seal Cup from Southern Bay Race Week.  The overall Best Boat of Race Week award is determined by a formula that considered finishes and size of fleet.  A boat must win it's fleet to be considered. ESSO BEE recorded a finish string of 2-3-1-1-2 over 5 races in the three day event.  Miller won the 17 boat PHRF C fleet.  One other Lindenberg 26 also made the trip from North Carolina.  Leon Turkevich's Hummer, did not complete the regatta because of a broken rudder.

ZAP FLASH - SOUTHERN BAY RACING NEWS YOU CAN USE

This you gotta know: * HOD OPEN HOUSE:  Friday (June 13) between 4pm and 6pm  the Hampton One Design class will stage an OPEN HOUSE at the docks between  the regatta party tent and the Brady Sailing Center (HYC).  There will be several HODs rigged and ready for interested sailors to hop in for a spin on the creek.  The idea is for those who are curious about the boats to have a chance to actually go out with a class member for a quick sail.  For additional info contact  Devon Sweeney by email …

#155 SOUTHERN BAY RACING NEWS YOU CAN USE

THE Collegiate Woman Sailor of the Year is in our midst!   Corrie Clement, Old Dominion University senior, was named to receive the Intercollegiate Sailing Association award last week. Quantum Sail Design Group (Annapolis) sponsors this award.  The award will "live" in the Collegiate Sailing Hall of Fame in Annapolis, after a couple of weeks in Corrie's possession.  Corrie has raced on several occasions in the southern Chesapeake in, among others,  the Hampton One Design fleet. Anna Tunnicliffe, also on the ODU team, and Corrie were both named All-Americans.

After months of preparation our on-the-water training program for the next generation of FBYC sailors is well under way. Opti kids on and in the water training was the first order of the day this past Saturday and Sunday. Concurrently in splendid isolation on the second floor of our new clubhouse, Kenneth Andreassen, a Dane speaking flawless English, was giving a world class presentation on Opti sailing, racing and tactics to a miserably small audience. Pictures of Ken and his students are available here. 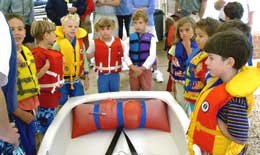 And on Sunday the die hard Junior racing team members were out in force using all of our 420 fleet for the first time. Onshore, thanks to the untiring efforts of the Junior Lt. Commander there …

Come join us for the first of FBYC's summer Junior regattas. We welcome all FBYC and Bay area Juniors to this CYBRA sanctioned event which includes a day of racing followed by awards and a cookout.

This is a perfect event to try out those skills you have learned since the beginning of the summer. Both beginners and seasoned racers will enjoy these races set in our picturesque Fishing Bay. For more details, click here

The District 11 Grand Prix was held this past weekend in Hampton Virginia.. Our Alain Vincey won the Masters Trophy! Results are here.

Lyn McCarthy was on the RC boat and provided the following report.Wild wind (gusts well above 30 knots and frequent) took Sunday away from the Laser racers at the District 11 Laser Grand Prix Regatta in Hampton Roads. They did get in three races on Saturday before Mother Nature threw her hissy fit. Henry Amthor (Hampton YC) won the championship with three 2nd places. Walt Bryde (Hampton YC) took home the 2nd place trophy (4-4-5) and Brian Shores (Severn Sailing)(3-6-6) 3rd. George Panayides (Hampton YC), defending 2002 champion, had a 1st in both race #1 …

BITTEN BY THE BUG (AGAIN) 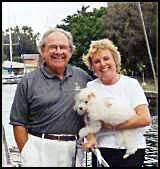 It's early May, and here we sit aboard NOMADESS, our newly acquired cutter, in English Harbor, Antigua. Our FBYC Burgee snapping in the stiff easterlies that inhabit these low latitudes. We are asking ourselves the age-old question, "how did we get here this time?" I guess the bug bit again at the Ft. Lauderdale International boat show in October. Click Read More for the full story of our year of cruising in the Bahamas, Virgin Islands, and Caribbean.

After years of racing EAGERNESS on the bay, and hours of trolling for anything that might bite aboard EAGER TOO, we were torn between a long-range motor cruiser or an around the world sailing vessel. For three years or so we … 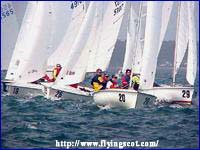 A meeting was held this past weekend to wrap up the final details of the new FBYC event -- Team Racing. This will be an interclub event with teams from FBYC and RRYC competing in this two race day series held in Flying Scots. The first race day will be held at FBYC on Sunday, June 29th. The second and final day will be at the RRYC on Sunday, July 27th. Awards and a cookout will follow the at the end of each day. There will also be an overall trophy for the winning team at the conclusion of the series.

We will have a four boat team from each club, with multiple races on each day. Since this will be …

#154 SOUTHERN BAY RACING NEWS YOU CAN USE

Wild wind (gusts well above 30 knots and frequent) took Sunday away from the Laser racers at the District 11 Laser Grand Prix Regatta in Hampton Roads.  They did get in three races on Saturday before Mother Nature threw her hissy fit.  Henry Amthor won the championship with three 2nd places.    Walt Bryde took home the 2nd place trophy (4-4-5) and …