Cruising With The FBYC Gang in September and October 2004

September and October Cruising at FBYC The fall is a great time to join your friends on the Bay with the FBYC Cruising Division. We have had wonderful cruises so far this year, and look forward to more fun and adventure this fall. Come join us. Pick out a trip and call the cruise leader to join us. Click below to see what good times we are planning to have on your Bay.

STINGRAY POINT REGATTA SEPT. 4-5, 2004 Calling all cruisers to race against one another or in the PHRF non-spinnaker class. This is a great weekend at the club with racers and cruisers having a terrific time on the water and at the party afterwards. Watch for details …

One Week Trip To Onancock, Norfolk, Hampton, and Sarah Creek

This notice is for Cruisers interested in this cruise.

There should not be much problem getting docks at NYC or HYC as it is mid week, but we still will make reservations by 9/7/04. Sarah's Creek Marina needs reservations since it is on Saturday night. Sat., Sept. 18th - Home to Onancock. 31 nm. Plan to raft up but some docks may be available from dockmaster. If you want a dock, please make your own arrangements. (Dockmaster: Isaac Annis; Telephone: 757-787-7911. 7 Days a Week 8 AM to 6 PM) American Pie will be anchored. Cocktails will be at the raft up at 1800. Dinner aboard. Sun., Sept. 19th …

#214 SOUTHERN BAY RACING NEWS YOU CAN USE

CRUISE - SEPTEMBER 11-12 Alise Hilbert (Tim Blackwoods good friend) has invited FBYC Cruising Group to her home on Dymer Creek (3740.81N, 7621.99 W) for our September Cruise. There are 2 docks (9ft. depth) for rafting or there is plenty of room for anchoring. Big and little kids may want to enjoy the pool. Please plan to join in for the festivities. Cocktail Hour: 5:30 Dinner Menu: Hors doeuvres, Steaks, Baked Potatoes, Bread, and Wine are provided. Please bring to share: your choice of a side dish, a salad, or a dessert. Hot dogs will be provided for kids, if preferred. Cost: $15 per person ($2 for children if eating hot dogs) Reservations: Send …
Tweet 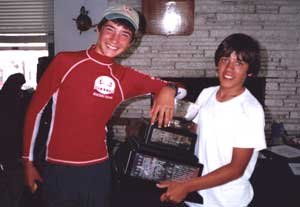 Please join me in congratulating Bryan Stout, skipper and Quentin Jenkins, crew, who won the 2004 Double Handed Middle Atlantic Midget Championship sailed in club 420s with first place finishes in the last four races of the ten race series. The regatta was held August 24 and 25 at Brigantine Yacht Club in Brigantine, New Jersey. Results at www.ussailing.net/BYC/midget_mid.htm

Way to sail - Quentin!!!!!! And you look pretty good, leaning on that huge trophy!

Another chance to race under a full moon this Saturday with the third leg of the Offshore Long Distance Series, as well as, a chance to get things in order prior to Stingray. There's still time to be in the running for the prize in each class. Voodoo Chile, La Maga, Cefalu, and Nereid are leading the divisions at the halfway point. Complete standings are listed on the second page. If you haven't tried it, you can now register on line for this and other events, thanks to Strother Scott's efforts. Just click the link. on-line registration

The Junior Program conducted the first of two Dog Days Series Sunday, August 22. The objective of Dog Days is to accomplish the goal of making sailing "more fun." While it is conducted in a "race" environment in which some racing fundamentals may be incidentally absorbed, the objective is to have a "Doggone Good Time". This event was for all FBYC Junior Sailors and included Dog Flag making, Dog Bone and Walk the Dog Race Courses, as well as a Pinata on shore. Winners were awarded trophy Dog Bowls full of candy

We had excellent participation on the first day with numerous Optis and three 420s. A highlight of the day was the appearance of an unidentified canine Race Committee …

#213 SOUTHERN BAY RACING NEWS YOU CAN USE 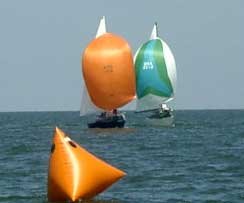 Southern Bay J24 Match Racing Regatta made good use of Saturday and Sunday's great sailing breezes to complete a single round robin among 7 boats.  When all was said and done, Haywire, Tripp Behm and crew (HYC) trampled the rest, winning each of their races.  North Carolinian Ron Medlin (PSA), Bash,  was second, and Mark Wensell (FBYC) was third.  Race Chairman: Brooks Zerkle.  This is the second year for the J24 match racing event in the southern Bay, this year hosted by Fishing Bay YC.
RICE - WALLIO win 45th MOBJACK NATIONAL CHAMPIONSHIP:  Skipper Jim Rice (Newport News) and crew Pete Wallio (Hampton) came away with the 2004 Mobjack crown after 3 …
Tweet

Please visit http://www.sailingscuttlebutt.com/photos/04/usodane/ to get some idea what 300 optis looked like at the USODA New England Championships a couple of weekends ago. Many of these young competitors will be attending the USODA Atlantic Coast Championships that we will host in October.

"Dog Days" a Fun Series of Races open to all Juniors Sunday August 22 and September 6th As promised in the Winter Junior Parents Meeting, the FBYC Junior Program will conduct the First Dog Days Series this year, beginning Sunday, August 22, with a follow-up Monday September 6. The objective is to accomplish the goal of making sailing "more fun." While it will be conducted in a "race" environment in which some racing fundamentals may be incidentally absorbed, the objective is to have a "Doggone Good Time". This event is suitable for all FBYC Junior Sailors. Hopefully, the older kids will participate in the fun.

#212 SOUTHERN BAY RACING NEWS YOU CAN USE

To Fiddler's Green:  Rudolph F. Lotz  -  June 18, 1906  to  August 11, 2004   Rudy Lotz was a special guidepost for racers in the southern Chesapeake Bay sailing community.  Most of today's racers knew him as one of the founders of CCV (Cruising Club of Virginia), a designer of sailboats, and skipper of Faith, his Seahorse 34.  However we knew him,  all of us will miss him and already know how fortunate we are to have shared any part of any moment of his extraordinary life.
MOBJACK NATIONALS will take place this coming weekend (August 20-21-22, Friday, Saturday, and Sunday) and recent class winners from the Governor's Cup and from the FBYC Annual OD Regatta …
Tweet

On July 31st the cruising division proved again that short handed racing, even with in-laws in the cockpit, even into a 25knt weather leg, can be construed as great fun. Eleven boats started and completed the 13.2nm course. 1st place went to Schiehallion (Brad Miller),2nd to Celebration (Gordon Nelson),3rd to Ishky Baha (John Koedel) and 4th to Snack Bar (Rus Dixon). Knowing one's PHRF rating proved to be a stumbling block for some entries. "Generic" PHRF ratings suitable for our cruising division can be estimated by comparing your boat to the valid ratings of similar boats on the PHRF of the Chesapeake, Inc. website. However, entering CBYRA sanctioned events (including most of FBYC's other offshore …
Tweet

Rain, rain go away... The regatta committee will not make any early decision to cancel this regatta due to weather predictions. Any decisions that may need to be made will be announced during the skippers meeting on Saturday morning. Keep your plans to come to Fishing Bay and participate in this great event!
Tweet

FBYC was again successfully defended from pirates this past weekend during the annual Kids Kruz. Thirteen families and eight boats formed a flotilla off of Stove Point and engaged the pirates at close range under full sail. For their part, the pirates came well armed with water balloons and water canon. The fighting was fierce and at times the sky seemed to be filled with water balloons. One sailor was heard saying that he had shrapnel all over his decks.

After the battle, the defending ships headed over to Fishing Bay to anchor out and or raft up for the night. Upon making landfall, the pint-sized pirates went to work painting and rigging (with a little help from their parents …

#211 SOUTHERN BAY RACING NEWS YOU CAN USE

ONE DESIGN REGATTAGANZA!  One-design racers will want to head over to Fishing Bay Yacht Club to the 65th ANNUAL ONE-DESIGN REGATTA, Saturday and Sunday, August 14th and 15th.  Here's a two day, multiple race series for FrontRunner, Mobjack, Flying Scot, Hampton, Albacore, Laser, Laser Radial, 420, Byte and Optimist on 3 separate race courses.  So, head for the Little Sue on the outskirts of Deltaville and follow Stove Point Road to FBYC.  For info contact:  Lori Moyer at (804) 342-7404.   Yes, camping is allowed.  Yes, there will be dinner and music, you provide the dancin', on Saturday!  And, Mobjackers, are invited to leave their boats at FBYC for the MOBJACK NATIONALS:  …
Tweet

Some years ago Bay clubs, including our own, arranged a bus trip to Baltimore to meet the winners of the Volvo around the world race for the leg ending that ended in that city. One of the crew of the Dutch boat, Assa Abloy, skippered by Roy Heiner, that won that leg was a UK resident who was retiring from racing to become manager of Cowes week. According to today's Scuttlebutt, this years races have had more than their share of SNAFU's so he's had his hands full. First a new Swan 60 ran into a chain between two buoys that protects the wreck of the Mary Rose. A sure way to slow a boat down. There …
Tweet

#210 SOUTHERN BAY RACING NEWS YOU CAN USE

After the Virginia Governor's Cup, one-design racers will want to head over to Fishing Bay Yacht Club to the 65th ANNUAL ONE-DESIGN REGATTA, Saturday and Sunday, August 14th and 15th.  Here's another two day, multiple race series for FrontRunner, Mobjack, Flying Scot, Hampton, Albacore, Laser, Laser Radial, 420, Byte and Optimist.  Three separate race courses.  What's not to like???!  So, head for the Little Sue on the outskirts of Deltaville and follow Stove Point Road to FBYC.  For info contact:  Lori Moyer at (804) 342-7404.   Yes, camping is allowed.  Yes, on Saturday there will be dinner and music; you provide the dancin' !
Southern hospitality!  FBYC invites racers …
Tweet

The following is the official Schedule Of Events for the Stingray Point Regatta. At the bottom of this notice, please find links to the entry form, NOR, and information on accommodations and directions to Fishing Bay Yacht Club. Further information is also available on the Events page: 10th ANNUAL STINGRAY POINT REGATTA

FBYC will host the USODA 2004 Atlantic Coast Championships on October 9-10, 2004 (race days). Many visiting sailors from the Atlantic Coast are expected to need accomodations at least the nights of October 8 and 9. We are hearing from registrants that there is concern about accomodations for this event in the immediate area. While there are limited accomodations in Deltaville, there are plenty of rooms in the surrounding area within 25 miles on high quality, fast moving, rural highways, particularly in the Gloucester (Comfort Inn), Kilmarnock (Holiday Inn Express), Irvington (Tides Lodge), Topping (Pilot House Inn), and White Stone (Whispering Pines Motel)areas. A number of currently available accomodations (totaling 145 rooms) within 25 miles (and within 30 minutes …
Tweet

Sunday morning, August 1, dawned bright and sunny, although without the heralded winds of Saturday. Six intrepid sailors braved the windless morn, some taking refuge in the shade as others fine-tuned the rigs. Well stocked with water and a hearty dose of good cheer, the boats pushed off from the beach at around noon, blowing heavily into the sails to get some momentum going. The abbreviated race committee (Mike and Chris Fehn) set the course and blew a whistle start . . . the race was on!