Fellow Cruisers, our trip to the upper Chesapeake Bay is now just 2 weeks away. I want to share with you our updated itinerary and give you some information you will need to make arrangements for slips at several locations, should you choose to use them. In addition, I would like to begin getting feedback from each of you on your plans, how many people you will have on your boats, and what activities you plan to participate in. This will help us to plan group activities, dinners, cocktail parties etc.My Co-Captain Nancy has asked that each boat try to have a total of 3 hors douvres during the course of the cruise so that she can call …
Tweet

J105s have 7 Boats on the line at Stingray

The J-105 class expects to have 7 J-105s on  the starting line this weekend at Stingray.  In part because Cyane and Will Crump have purchased hull number 210 which they are renaming She Crab Soup.  We are all thrilled to have them with our fleet, and we look forward to some fun competition in our larger fleet.
Welcome aboard - Cyane and Will!
It just so happens that I plan to go to the UVa football game on Saturday with Bev Crump …
Tweet

The weekend of August 23rd and 24th three Flying Scots from the capital district, crewed by 5 sailors from FBYC placed first, third and fourth at the Carolinas District Championship. 19 Flying Scots competed at Black Beard Yacht Club in New Bern, NC, on the Neuse River. A total of four long windward - leeward races were sailed in moderate winds and waves. The top five finishers were :

# 408 SOUTHERN BAY RACING NEWS YOU CAN USE

MIRAGE and CATS' PAWS  Win CAPE CHARLES CUPS, PHRF and Cruising Divisions respectively.  Cape Charles Cup organizers decided last winter to give a CC Cup to two boats in their unique southern Bay regatta - one to the PHRF classes winner and one to the Cruising classes winner.  They figured double the fun in presenting double the number of beautiful Weems and Plath@  lantern trophies.  And, from the sailors reactions, it's a good idea!  These trophies go to the boats with the lowest  total corrected time over the two days of racing - day one from Little Creek (Norfolk) to Cape Charles, and on day 2, from Cape Charles to  Buckroe (Hampton).  This year Christian Schaumloffel's Hobie …
Tweet

There is much discussion on Scuttlebutt about whether the 49er Medal Race was fair competition, and whether the Danish duo who won the Gold should have been allowed to race a borrowed boat after breaking their mast before the start.

For those who want to watch the action here is a video of the 49er medal race: http://www.youtube.com/watch?v=n5G3N66j_rE

Enjoy all 9 minutes, and go to Monday's Scuttlebutt to read Charley Cook's rationale for why the RC decided to hold the race in a blow. Also about why the German team deserve the medal for sportsmanship, "better an earned bronze than a dirty silver".

Spam Problem - We are still working on our spam problem and the results are still not where we want them. For example, we learned one of our forwards was forwarding about 20 spam messages per day to a member, but because he had a good spam filter, it was not a big deal for him. But for us, it causes us to be rated as a terrible sender of spam. As suggested last month, I have now deleted all email forwards at www.fbyc.net except for a couple who have asked to keep them. Hopefully that will eliminate a major problem.

A fourth Gold for one of my favorite nations

Like father, like son. Back before WWII, and this started in Europemore than two years before Pearl Harbor, my father turned to BBC to hear the play by play report of the latest Test Match, cricket, between England and Australia. With live coverage unavailable I'm reduced to reading about Olympic sailing on my Macbook. The Star final may not have been a nailbiter like the Laser radial but in the end Ian Piercy and his crew got the requisite place ahead of the Swedes. And in second place none other than Robert Scheidt whose second place finish behind Ben Ainslie in the 1999 World Championships in Melbourne in January of 1999 was one of the few World's where …
Tweet On August 9-10, FBYC held its 69th Annual One Design Regatta. Over 80 boats attended including four 420s, six Albacores, twenty-three Flying Scots, nine Front Runners, seven Mobjacks, four Hampton One Designs, twelve Lasers, five Laser Radials (including four Juniors of which three were Girls) and thirteen Optis (of Fleets, two were Red, seven were Blue, four were White and one was Green). Joining the regatta for the first time were four San Juan 21s, led from afar by FBYCs Mike Chesser. The Mobjacks combined the Event with their 2008 National Regatta, beginning early on Friday for a three day championship regatta for that class. Congratulations to Anna!! One For The Record Books

August 19: One For The Record Books

The wind was light, the waves choppy, the visibility diminished, and the stakes high.  This was the scene for the Laser Radial medal race in Qingdao on Tuesday.   American Anna Tunnicliffe had to finish 4th or better to secure a Gold medal.  No USA woman had won a Gold since 1988.  Several thousand fans were a few hundred yards away on the sea wall screaming for these 10 women. Among them USA team leader Dean Brenner and the US Sailing Team looked and cheered like Super Bowl fans.  The race was one that will be talked about for many years …

Here is an interesting article on how the University of Virginia has established a Sailing team. http://www.uvamagazine.org/site/c.esJNK1PIJrH/b.4391407/. There is no FBYC connection that I am aware of but one day..... maybe.

Excerpts... The sailing association also is building its competitive resumé. A member of the Mid-Atlantic Intercollegiate Sailing Association, the group is an underdog compared with more sailing-focused schools like the U.S. Naval Academy or Georgetown but performs neck and neck with Virginia Tech and William & Mary.

"The regattas are both laid-back and intense," says Overstreet. "They are very sociable off the water, but on the water, rival skippers will rip your head off if you make a mistake and …

No-one is happier than the writer to see Lasers coming back into fashion at FBYC and todays news is icing on the cake.
Golds for former ODU sailor Anna Tunnicliffe and Paul Goodison sailing for GBR, that countries third gold. Closer to home a write up by our own Jon Deutsch, Laser District 11 Secretary about last weekends District Championship at Deep Creek, Maryland with Scot builder Harry Carpenter as PRO. Jon's usual prompt and complete write up follows
From: jon@laserdistrict11.org
Subject: District 11 Championship Results
Date: August 18, 2008 1:22:01 AM EDT

# 407 SOUTHERN BAY RACING NEWS YOU CAN USE

Moving things around on the Home Page

This morning I started that process, and have considerably shortened the number of items displayed at the top. Please Notice the Link to Many More: Results and Photos which will take you to a page with most of the last 6 months Results and Photos.

# 406 SOUTHERN BAY RACING NEWS YOU CAN USE

Racing this past weekend on the southern Bay was filled with extreme wind shifts,  T-storms, and  "dead sea" conditions.   Mother Nature was her most uppity on Sunday.  Oh, well, it's August! 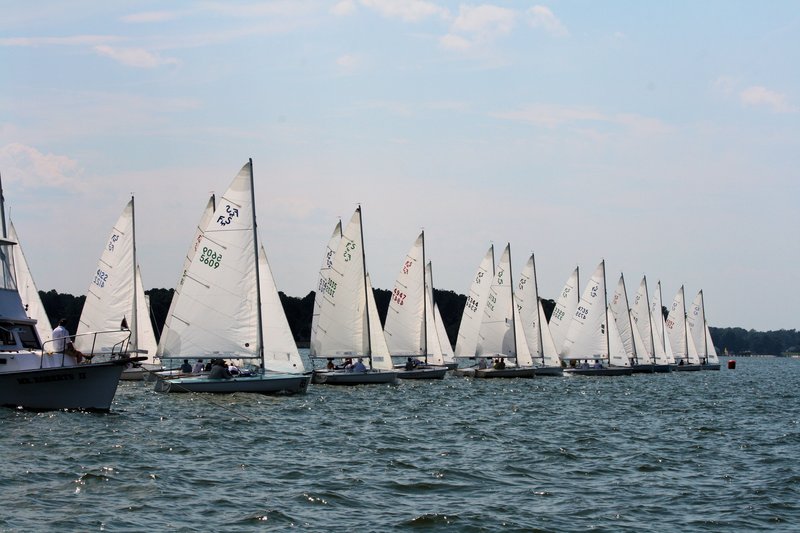 Meanwhile, up on the Rappahannock / Piankatank Rivers,  on Sunday, Lady Nature left racers at  Fishing Bay Yacht Club's 69th Annual One Design Regatta breathless - truly.  The sound of thunder and lack of wind sent the dinghy fleets in on Sunday with little accomplished, although, as in Hampton Roads, it  "weren't for lack of trying!"     The Annual One-Design Regatta ran Friday through Sunday, and during the first two days most classes got plenty of racing.  The Mobjack Class …
Tweet 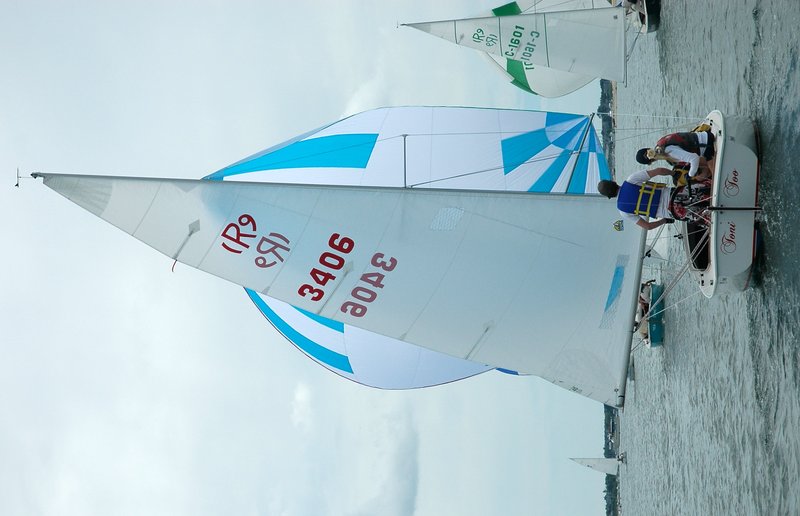 Saturday, August 2nd witnessed an all-FBYC team of Sophie Massie, Blake Kimbrough, and Strother Scott Jr. do what had been previously thought next-to-impossible in Nantucket Harbor. On the first day of the August series, the three of them, in the Massie’s Rhodes 19 Toni Too, won a race. The picture to the left is of Toni Too from last year.

This might not seem like that big of a deal, but in doing so, the team snapped a near-unprecedented streak of dominance – about 50 races without a loss.  Skip Willauer, a sailor who grew up on Nantucket and has raced the Rhodes 19 Race Horse there for many years, had not failed to record a bullet in any …

Paul Mellen from OPCYC is organizing a loose “rally” of folks who think it’s about time to sail to Bermuda.  D-Day is Saturday, 6 June 2009 – the 65th anniversary of the original nautical crossing which was also termed “D-Day.”

We held an initial organizational meeting for the 2009 Bermuda Rally on Tuesday 15 July.  At the time of this writing, we have seven boats signed up to participate, and loads of people who want to crew for the seven skippers.  The seven boats and skippers are: 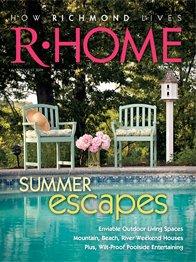 I went to 4 different bookstores before I found my very own copy of Carrie Nieman Culpepper's article in Richmond Home magazine. I have scanned it, and a pdf of the article is available - a 12 MB file - as to first link on the the Publicity Page

Great photos of the Club and our neighbors.