#498 SOUTHERN BAY RACING NEWS YOU CAN USE

AMERICAN INDEPENDENCE DAY - SUNDAY, JULY 4th.   LET FREEDOM RING!
NEWPORT TO BERMUDA:   From  Lewis Toms comes the following:  Rives Potts, native Richmonder and longtime member of Fishing Bay Yacht Club who grew up sailing on the Southern Chesapeake Bay, won [his class and his division in]  the prestigious Newport to Bermuda Yacht Race on Carina.  Included in his crew were FBYC members Will Crump, his wife Marie Klok Crump and one of his sisters, Cyane Crump.  Marie's brother Thomas Klok, who has frequently sailed at Fishing Bay, was also among the crew, along with two of Rives' sons and others.  Potts' McCurdy and Rhodes Custom 48 footer, commissioned in May of 1969 was …
Tweet

How did Carina do all that?

Another article about Carina at www.bermudarace.com by John Rousmaniere

How did Carina do all that?  A lot of people have been asking this question at the Royal Bermuda Yacht Club since Rives Pottss 48-foot sloop finished the Bermuda Race on Tuesday morning and, that evening, became the winner of the St. Davids Lighthouse Division.

That refers to two things.  First theres Carinas domineering victory margin of more than three and a half hours. To put this in perspective, in Class 4 the top 10 places fit under a tent of only three hours, with first-place Windborns margin over second-place Lapin exactly 11 seconds.  Then theres this: Carina had all …

Note from Strother - among the crew blending four families - were FBYC Members Rives Potts and his two sons, Allen and Walker, Will Crump and his wife Marie Klok Crump and his sister Cyane Crump (all three FBYC members) and Marie's brother Thomas Klok, who has frequently sailed at FBYC.

Just rec'd the following from Cyane --- "Strother - thanks so much for cheering us on. Yesterday was a stressful day as we sweated out the other boat's finishes. This was really a great experience and I am so excited for Rives. Cyane"

Carina has won the St. Davids Lighthouse Division in the 2010 Newport Bermuda …

There will be a $5 dinner served at the club at 5:30 p.m. before the Moonlight Regatta on Saturday, June 26. Freda Cross plans to serve bratwurst, German potato salad and beans. Please sign up at www.fbyc.net for the race. Theres no way to sign up for the dinner; however, it would be helpful if you could send a headcount for your boat of those likely to be at the dinner to Freda Cross at fjcross@ymail.com or give her a call at 804-749-8502 (local call from Richmond). 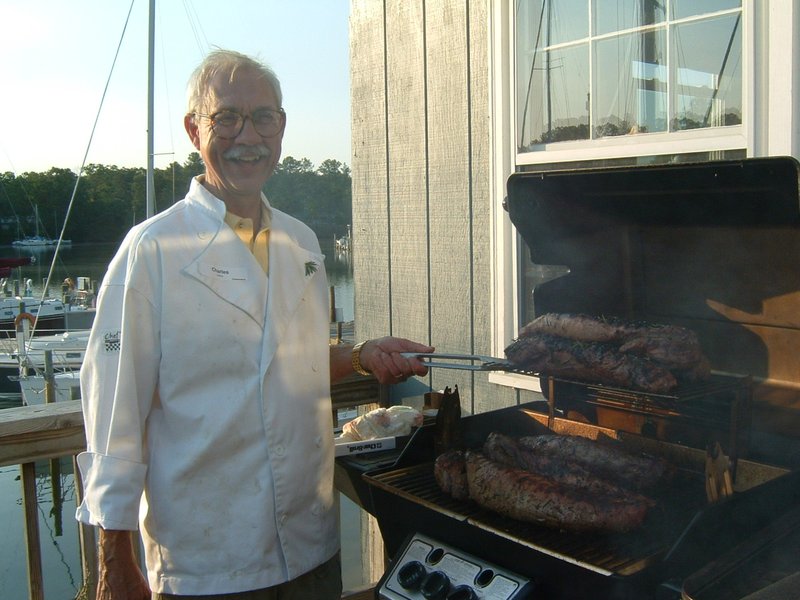 Charles A. Lytton of 13610 Hailsham Circle, Midlothian, VA 23113, died on June 20, 2010. He is survived by his wife of 31 years, Carol L. Lytton. Charles received his BS from Virginia Tech and was President and CEO of Woolfolk Properties, Inc. at the time of his death.

As avid sailors, Charles and Carol were the owners of Song of Joy, a Tatoosh 42. In 1992, the Lyttons joined Yankee Point Yacht Club where they were the recipients of cruising awards in 1999 and 2001. In 2000, YPYC awarded them the much coveted Commodores Trophy. Charles served as Commodore of YPYC in 2006 and 2007 where he …

Carina - Thrashing to the Onion Patch 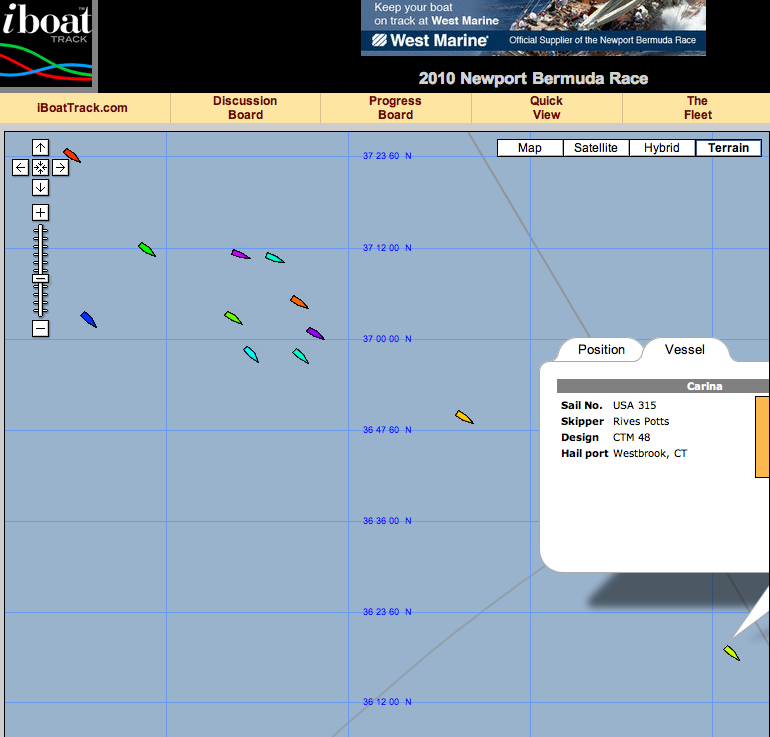 Carina - with FBYC members Rives Potts, Will and Marie Crump and Cyane Crump on board, is featured in tonight's Scuttlebutt article.

Quoting.... and a iBoatTrack http://cloud.iboattrack.com/r/google_view.php?r=2010_newport_bermuda screen shot at the left.....

"While the focus of attention has been on the big, Open Division boats, Carina, a Class 3 McCurdy & Rhodes 48 skippered by Rives Potts, appears to have made the most of the Gulf Stream. At 15:00 EDT today, Carina was an incredible 60 miles ahead of Triple Lindy, the next boat in her class, and is now within 300 nautical miles of Bermuda. This is the biggest lead in any class at this time."

Hamburgers, Hotdogs, and Drinks will be provided by FBYC

The FBYC Laser Fleet would like to invite junior parents and any other sailors out for some evening racing Wednesday, June 23. Well get a lot of fun, informal races in with the first start just off the dock at 6pm. If you don't have a boat, come anyway and we'll find everyone a club or loaner boats to get everyone out on the water.

Well have an informal skippers meeting at 5:00. And the first warning will be at 6. Well race until we run out of light or wind.

This summer Fishing Bay Yacht Club Teams are going green! We encourage the sailors to bring one or two reusable water bottles to practice each day. There will be a container provided for refilling with ice water. If anyone has extra water bottles, please bring them for anyone who needs or forgets them. Practicing this will reduce the amount of plastic used throughout the summer and the amount of litter we put in the water and on land. After all, the Chesapeake Bay is our bay and we need to take care of it! Thank You.
Tweet

Sonar Trip Redux: Stopping By House on a Sunny Afternoon Whose house this is I do not know
His house right on the interstate
From Rochester to Fishing Bay
And trucks are whizzing by my ear.

My little boat must think it weird
To stop along the road like this
Without a drop of water near
But I have memories to take.

She gives her shrouds a tinkling shake
As semis zoom around her wake
The only other sounds the sweep
Of mountain wind in twinkling sun.

This porch is lovely and shade is deep
But I have miles to go before I sleep.

On Monday and Tuesday, your FBYC/NYYC Campaign representative drove 1000 miles to Rochester, NY and back along the stunning route of proposed Interstate 99 …

We are currently recruiting dedicated, experienced sailors for our 2010-2011 Race Team. In the past year, Junior John Mellnik (finalist in the 2008 US Men's Championship and the 2006 Jr. Singlehanded Championship), has completely overhauled our team structure--organizing bi-weekly practices, acquiring new sails, designing team pennies, and providing experienced tactical instruction on & off the water.

We are hoping to build a program that attracts enthusiastic, knowledgeable athletes who are interested in improving as racing sailors and becoming part of a team that is competitive in the ACC and greater Southeastern conferences. If any of your Junior sailors are attending (or considering attending) UNC-Chapel Hill, please have them contact me.

Thanks for helping to spread the word, and as …

Coris coaching duties will have her busy for about four hours each day on Thursday, Friday, Saturday and Sunday, and a series of away Regattas. She will be available during non-coaching and traveling time for Private Sailing Lessons.

Cori started sailing when she was 6 and is inseparable from the water. She first trained in Optis on Cape Cod and progressed to 420s, Flying Scotts, and Lasers at age 13 upon joining FBYC … 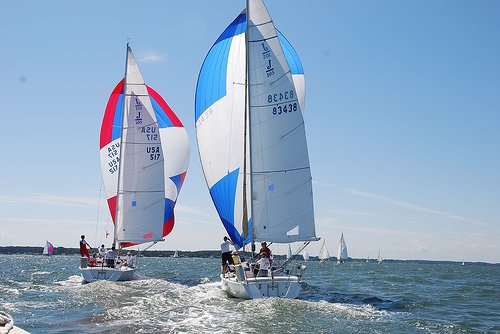 Fishing Bay Yacht Club and Stingray Harbour Yacht Club, co-hosts of the Southern Chesapeake Leukemia Cup Regatta, are preparing for the grand finale of the 2010 Leukemia Cup series of events which takes place over the weekend of July 9-11.

Dont forget to register online by June 15 for the generously discounted early-bird entry fee of only $100 and to have your boats name emblazoned on the ever-popular official Regatta T-shirt. After June 15, the fee increases to $125, and, in addition, youll be forced to employ your calligraphic skills with a marking pen to list your vessel on the shirt.The Leukemia Cup Auction is scheduled for Friday evening, July 9, at the Stingray Harbour Yacht …

Club Member on the Cover of Spinsheet Magazine 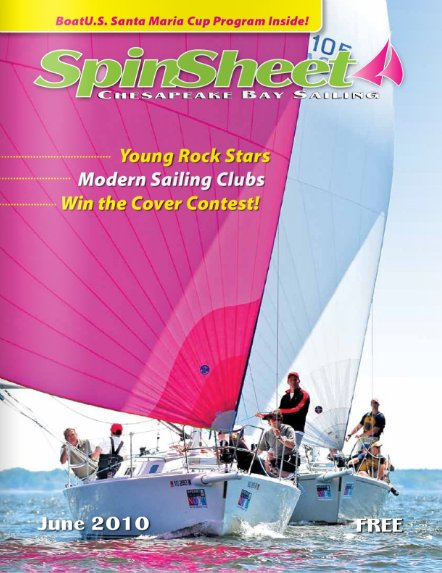 Clark Dennison appears on the cover of June's Spinsheet Magazine as the spinnaker trimmer in the foreground aboard the J105 Varmint at the NOOD Regatta in Annapolis held in May.
Tweet

#496 SOUTHERN BAY RACING NEWS YOU CAN USE

RUMBLE  Takes SBRW  BLACK SEAL CUP!    Ben Weeks and Michele Cochran of Yorktown, Virginia,  stormed Southern Bay Race Week in their J29, RUMBLE.   Sailing in the highly competitive PHRF B-1 fleet with a crew of friends from Yorktown, Seaford, and Hampton, the long time J29 racers put  together a string of  6 bullets in 7 races over three days of varying conditions.  Rumble turned in a string over 3 days of racing of 1-1-1-1-1-1-2.    Five other boats along with Rumble had outstanding performances during the regatta that earned them BOAT OF THE DAY awards:   Day 1 (sponsored by Winters Sailmakers) - (East Course) Rumble, Weeks & Cochran;  (West Course) Horizon, Bob Fleck.   Day 2 (sponsored …
Tweet For the last two weekends, the club members participating in the campaign for the 2010 New York Yacht Club Qualifying Series Campaign have been ramping up their practice schedule. For several hours, four out of the last five weekend days, a dozen sailors have practiced in the campaign Sonar and two Colgate 26s generously provided by Jim Snowa and Den Roberts. The sailors have rotated through the three boats and various positions to hone their skills in each position and give those with the weighty responsibility for ultimate crew selection an opportunity to assess their talents and team work. Although temperatures have been hot, the winds have been unusually good in speed and direction. Yesterday, while landlubbers suffered excruciating temperatures … For those of you who missed the Rosegill picnic, you missed out on a great evening.We had 15 cruising boats in Urbanna after a beautiful sail up the river. The wind and tide were in our favor and a few of the cruising boats arrived before the PHRF fleet-I have to admit that the PHRF fleet went a little further out into the bay but the cruisers started last.Perfect weather, good food,good music,some libations,and good fellowship was shared by all. Say thanks to Mike Caulkins when you see him for a job well done.

The cruisers had breakfast in Urbanna before heading out for an anchor-out in the eastern branch of the Corrotoman. Beautiful weather …

To many observers and sailing veterans, the event dramatically superseded the America’s Cup as the world’s foremost international yachting competition.  Ladies and gentlemen, FBYC is going to this party and we won’t be leaning against the wall when we get there.  To make this happen our team needs your support.