The best weather of the Summer blessed us Saturday night for the Marslight Regatta. 18 boats were treated to a gorgeous sunset, no moon, but a million stars, and Mars...and oh, yes, there was racing too...First place in PHRF A was taken by Paul Andersen and the Titillation crew, with 2nd going to Strother Scott and his Loose Cannon crew of 1 adult and 5 kids. Loose Cannon topped the J105 fleet. PHRF B was won by Miles Booth and the crew of Shenanigan, while Eric Powers and the crew of Nereid took top honors in the 9 boat Non-Spin class, with the Gaenzle family finishing second in Nutmeg.

#165 SOUTHERN BAY RACING NEWS YOU CAN USE

A bee for your bonnet:  On October 18, The Mariners' Museum, in Newport News, VA, is presenting an Antique and Classic Boat Show. Plans call for an all day affair on the Museum grounds and a number of runabouts on display on the lake.   Efforts are under way to have some small sailboats there too.

2003 HOD NATIONAL CHAMPION is LATANE MONTAGUE: Latane and his crew, Chris Johnson, sailed  in the National Championship under the Potomac River Sailing Association banner.  As 2003 champion, Latane will name the site for the 2004 event.  He may pick any location on the Bay, and several interesting ones will be explored as possible hosts.  Finishing second in the 2003 …

Flying Scot Sailboats can sink after all!?!

Sailboat mishap has happy ending - reprinted from the Southside Sentinal

"Copyright Southside Sentinal, used with permission."
Although they dont know the names of the people who helped them when their small sailboat overturned on August 8, Joe Grimes and Eleanor Dunlap of Arlington said they are very thankful that so many people came to their rescue in the Rappahannock River just off Urbanna Creek.

Dunlap said people in four or five boats came to their rescue and helped them right their 19-foot boat. We will probably never know their names, but they will always remain in our hearts, said Dunlap.

Grimes said he and his wife, who are part-time residents of Urbanna, were trying to raise the main sail …

The 64th Annual One Design Regatta held on August 9 & 10 can go down as a fun and successful event. In near ideal conditions, 82 boats in nine divisions raced two days in 8 - 15 knot breezes in FBYC's premiere One Design event. Of the 82 boats, 35 represented Fishing Bay. The largest class at the event was the Flying Scots with 18 boats. Two visiting classes were Hamptons with 13 boats and Albacores with 9 boats.

The race committees did an outstanding job running at least 7 races on the three race courses. It was great to have the club's flagship, Mr. Roberts, back on the starting line. Results of the regatta can be found on …

Cruise with Kids: Pirates on the Prowl in Fishing Bay!!

Swarms of small pirates attacked FBYC this past weekend during the annual Cruise with Kids. After a slight delay due to threatening skies Saturday morning, the pirates commandiered a flotilla of small ships, hoisted the jolly rogers they made that morning and put to sea where they fought a pitched battle with water cannon, water ballons and washdown hoses off Stove Point. No prisoners were taken though and the pirates soon stormed ashore near the main clubhouse in search of fabled buried treasure.

Later that afternoon, several grownups met their fate at the end of the plank (aka diving board) for the annual cannonball contest. Last year's defending champion Captain "Gusher" Gaenzle was handed certain defeat by Captain "Hardball …

From Alain Vincey....run to your nearest newstand to get the new, September issue of Sailing World which features the old and new FBYC clubhouses front and center in Gary Jobson's article, "Taking on the Big Club Project"!!
Tweet

As the August moon fades, and my creative well dries up, member submissions for reasons 7, 6, 5, 4, 3.....for doing the Moonlight Regatta are requested, please post for everyone's pleasure in the reply at the bottom of the second page below. Best reason will win a free dinner at the cookout!
Tweet

In a light and shifty weekend of racing in Annapolis, MD, the team of Scott Collins, Blair Hamilton and Marie & Will Crump bested a 45 boat fleet that included the current North American Champion in addition to several other exemplary teams. The regatta was the debut for Will and Marie as a husband and wife team, and a championship title in a major event could not have been a more suiting wedding present. 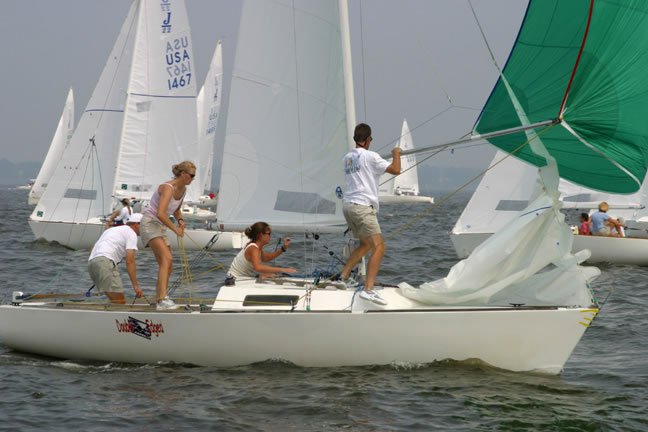 Will remarked that it was also a special experience to connect generations of sailors from Fishing Bay in having the opportunity to share the experience with Blair, now 21, who has demonstrated her own skills many times over in the Optimist and Byte classes. This event …

#164 SOUTHERN BAY RACING NEWS YOU CAN USE

The 2003 MOBJACK NATIONAL CHAMPION IS TREY SMITH. In three days this past weekend, the class was able to get in the required number of races (3 of a minimum of 6 miles each) in topsy turvy weather that went from drifty to honking thunder storm precursors.  Yesterday, going into the third and final day of the regatta, held off the mouth of the Warwick River in the James River, Trey Smith and Mark Arnold were tied.  They decided the championship with a 1-2 (Smith-Arnold) finish. Bob Beach from Winchester, Virginia, sailing out of the Potomac River Sailing Association finished 3rd.  Crew for the top three finishers, Smith, Arnold and Beach, were Jordan Wintringham,  Matt Frank …

The 8th reason for doing the Moonlight Regatta:
If Queen Anne's Revenge were to suddenly appear off your stern, it's good to know where you stand in the FBYC fleet...if you're not the fastest, there's always a good reason for not being the slowest, either...no quarter given...
Tweet

Although it started with a no wind delay, the August 12th Junior Regatta featured oscillating but steady wind and a strong turnout by neighboring clubs, particularly Norfolk Yacht and Country Club and Ware River. Sailors also came from Severn and Hampton. There were 12 Red-Blue and White Optimists, 11 Green Fleet Optimists, 7 Lasers (three radial and four full rig) and four 420's.

Optimist Race Committee was Ron and Ruthanna Jenkins aided by Eric Powers in the mark boat. Coaches Melanie Clore and Justin Ailsworth (coach at WRSC and FBYC member) and Steve Wirt in the mark boat managed the 420 and Laser Course. Social Chairperson Kelly O'Toole served a delicious post race meal to all, and juice …

Ten Days to the Marslight Regatta

The 10th reason for doing the Moonlight Regatta comes from Strother Scott:
You'll have the chance to almost reach out and touch Mars when it makes its closest passing of Earth in 50,000 years, a mere 35 million miles, as opposed to its normal 60 million miles...look for the blazing orange (if dust storms don't interfere) early in the evening in the southern sky close to the moon....while to the north, you may see remnants of the Perseid meteor shower as the Swift-Tuttle comet makes its passage through our galaxy....
Tweet

#163 SOUTHERN BAY RACING NEWS YOU CAN USE

"Sailboat Sinks After Colliding With Warship" That was the headline on a story in the August 7, 2003, issue of The Log, California's Boating Newspaper.  Seems a 24 foot sailboat successfully avoided a nuclear sub, but, in so doing, ended up hitting a helicopter carrier.  The sailboat sank, but the sailor and his dog were both rescued.  The incident took place at 11:30 a.m. on July 28th, just outside San Diego Bay.  Weather conditions were reported as overcast with high clouds and some sunshine with a 15 knot breeze. The message here is don't mess with the big gray ones.  (Thanks to Jean Kluttz, who spends a lot of time organizing …

The 12th reason for doing the Moonlight Regatta:
the stars will be brighter, in case the batteries in your GPS go dead....
just follow the Scotts or the Gaenzles...
"they are headed back to Fishing Bay aren't they?"
Tweet

FBYC Members at Will and Marie Crump's wedding 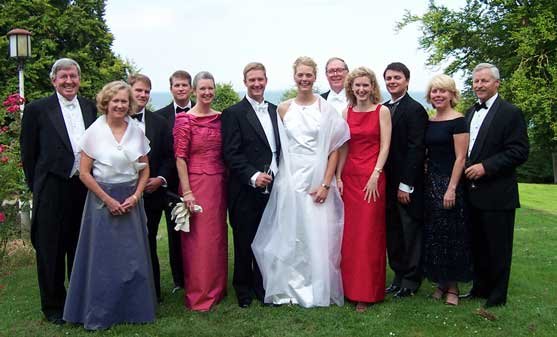 The Fishing Bay Yacht Club representatives at the Will Crump-Marie Klok wedding in Århus, Denmark were - Left to right:

Weekends at the ranch

Another day, another dollar. Another month started off with a bang Friday August 1, with a Board meeting at the club and a reception for new members. Some 55 people stayed for dinner, and it was good to meet partners and newcomers who have not used the club as much as our hard core members. Hopefully they all enjoyed their new found friends and will come back regularly. Saturday Sam and Nancy Stoakley did a great job hosting the racers after the Cruising Regatta. The 14.5 mile race with a staggered start was masterminded by Chip Hall, and after it was all over Commodore Cole finished in second place, helped immeasurably by the loan of a well trained crew …
Tweet

We now have about 140 members signed up for passwords. Members will notice after they login to the Members Only section, that the second line on the navigation screen will now read something like:
Members | Edit Your Information | Log Out |

Once you Log in, the web site will remember who you are. As a result, as long as you use the same computer, you will not need to LogIn when you reboot your computer. But if you are using someone else's computer, please remember to Log Out when you finish in order to avoid any unauthorized use of our password protected web pages.

#162 SOUTHERN BAY RACING NEWS YOU CAN USE

Mark Wheeler Does 3-Peat in Virginia Governor's Cup: Mark Wheeler won his third consecutive Virginia Governor's Cup this past weekend.  He's becomes only the second sailor to do so in the 39 year history of the event.  Rob Overton won the Gov's Cup in Lasers in 1984, 1985, and 1986. Wheeler, Virginia Beach (HYC) topped the 20 boat HOD class.  Ware River Yacht Club  hosted the event sailed on the Ware River (Gloucester).  The Gloucester Chamber of Commerce Cup went to the top junior sailor, Eric Brisse, 14.  Brisse hails from Tucker, Georgia, and sails in the Ware River YC junior program.  He raced in Laser (juniors) this past weekend …
Tweet 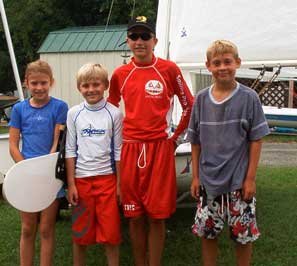 Thanks to our friends at Rappahannock River Yacht Club for a superb and fun regatta in Irvington today.  Optimists, Sunfish, Lasers and 420's raced on Carter Creek within sight of the club dock.  Winds were 12 - 15 knots at the beginning, but moderated somewhat for the second and third races.  Sailors came mostly from Indian Creek, Rappahannock River and Fishing Bay Yacht Clubs, as well as Premier Sailing.

After the races, everyone was treated to a cookout and all sailors received a t-shirt.

First Pics in from Will Crump's wedding in Denmark 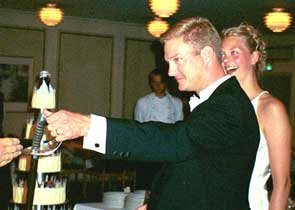 Will Crump and Marie Klok were married on July 25 in Aarhus, Denmark. Will was presented a sword to cut the cake.

The rehersal dinner was hosted by the Crumps with a Viking Motif! 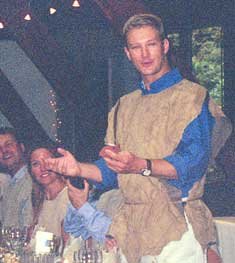 FBYC's representatives, Jim Rogers, Bev Crump, and Strother Scott were still going strong at 4 AM at the dance at the Klok home following the wedding dinner. 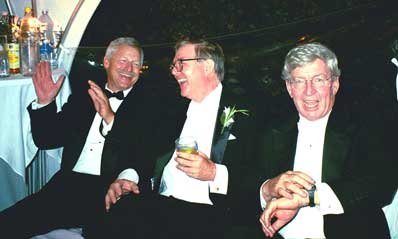 The wildflower meadow was planted in March, and through the spring and summer the 3.81 million seeds have taken off and colors have been ever changing. While the view from the top doesnt show off the wildflowers, its definitely worth a walk around Bubba to appreciate the colors and the butterflies.

A week on the water

The dog days of summer may be here, but there are ample opportunities for spending time around the water, although this past week has provided too many for the writer. Four days, starting Tuesday July 22 with family at Smith Mountain Lake, 893 feet above sea level, so it gets down into the 60's at night. A 240 mile drive Saturday to get to Fishing Bay to catch the end of a 420 Fest, and the second Summer Seabreeze Regatta. Unusually good conditions for late July. And fabulous after race food prepared by Susan and Phil Webb, another great effort by members of the Flying Scot family.

Looking at Fishing Bay early on Sunday, there was promise of a …